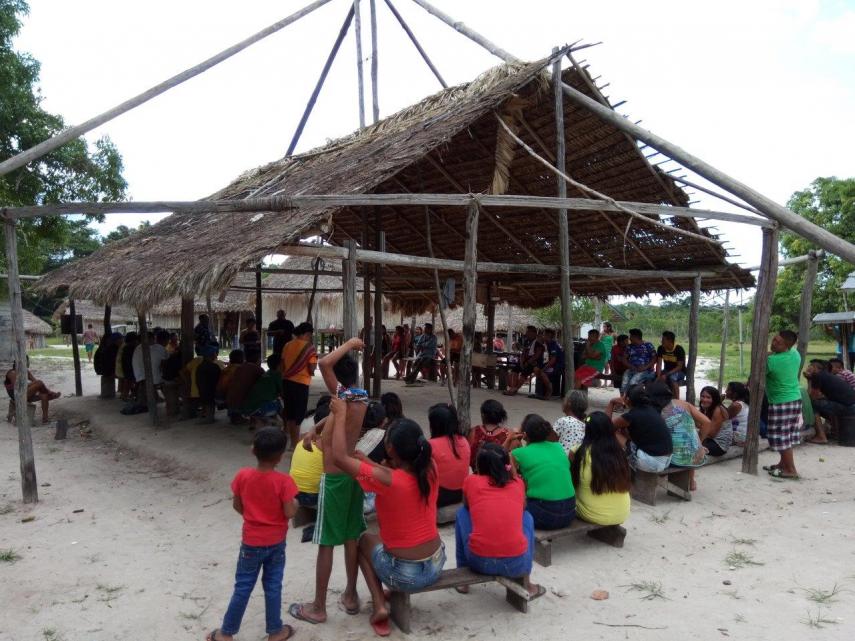 1 October 2019 saw a historic moment in Suriname. Two draft laws were submitted to the Minister of Regional Development: a proposal for a Collective Rights Act for Indigenous and Tribal Peoples in Suriname (including land rights), and a proposal for an amendment of the constitution.

These legal proposals are the result of the work of a team that was installed by the Minister of Regional Development in November 2018, tasked with implementing the “roadmap for the realisation of the legal recognition of the land rights of indigenous and tribal peoples (ITPs) in Suriname.” This roadmap was the outcome of months of discussions between the government and traditional authorities following a manifestation organised by Association of Indigenous Village Leaders (VIDS) in August 2016 to demand the implementation of the Inter-American Court of Human Rights’ (IAHCR) ruling in the Kali’na and Lokono case.

The implementation team is composed of a management team plus three technical commissions: a commission to prepare the legal proposals; a demarcation commission; and a commission for information-sharing and communication. The traditional governance of both indigenous and tribal peoples is represented on the management team and in all three commissions. The team’s work built on draft legislation that VIDS had already developed as a way of suggesting ways forward and providing concrete input in the land rights process after the IACHR ruling.

The finalisation and submission of the draft law is the result of decades of work by VIDS, the Association of Saramaka Authorities (both partners of Forest Peoples Programme) and other tribal peoples’ organisations. This work involved sustained litigation (major rulings of the IACHR, including the Saramaka case, the Kaliña and Lokono Peoples case and the Moiwana case), reports and communications of the UN Committee on the Elimination of Racial Discrimination (CERD) on the situation of the Indigenous and Tribal Peoples in Suriname, Inter-American Commission on Human Rights’ precautionary measures in the  Maho case, and reports of the Special Rapporteur on the rights of Indigenous Peoples in Suriname.

Other efforts included ongoing capacity building among the traditional authorities; demarcation of customary territories; collection of information on traditional occupation and use; drafting of concept-laws and awareness-building among politicians and the general public about the internationally recognised collective rights of indigenous peoples; and pressure on consecutive governments. The ‘roadmap’ was approved by the Council of Ministers, after which the President ordered the Ministry of Regional Development to implement it. The deadline to finish the draft laws was 30 September 2019.

The draft law focuses on three crucial collective rights of the indigenous and tribal peoples (ITP) in Suriname:

Indigenous and Tribal Peoples’ conference to discuss the legal proposals

From 23-25 September 2019 the traditional authorities of ITPs held a conference in Marshallkreek (Brokopondo) to discuss the near-final proposals in depth. Over three days, article by article, and in different languages, the draft law was reviewed and discussed. Some critical comments/corrections were collected which the management team was requested to take on board in finalising the law, but the leaders unanimously gave the mandate to the management team to finalise and submit the law on 1 October. That the tribal peoples and indigenous peoples are really joining together in this process is a significant element.

The Marshallkreek conference also included bilateral talks between indigenous and tribal groups, including the indigenous peoples and the Ndyuka Maroons of Lower Marowijne. They signed a joint declaration and the end of the conference about good neighbourship and communal use of the forests and other areas they share.  “From now on we will be like twins”, they said.

The drafts will be presented by the minister of Regional Development in the Council of Ministers, and after approval presented to the President. The President will then submit the proposal to the National Assembly (Parliament), that will address it in a public meeting.

No specific dates have been determined so far but the traditional authorities are hopeful this will happen soon. VIDS does expect the National Assembly to adopt the law before the next elections in May 2020. It is hoped that they will ‘give their blessing’ to the current version.

The roadmap includes a demarcation process. All areas traditionally occupied and used have to be mapped – and through this demarcation process the recognition will be guided. VIDS had already mapped a number of areas and is currently demarcating and mapping remaining indigenous areas. Other priorities include the continued strengthening of leadership and governance, and preparations for community-based plans for management and regulation of the customary territories. FPP is supporting communities in Suriname throughout this process.

Related content
Petition Submitted to the Inter-American Commission of Human Rights, Organization of American States, by the Kaliña Indigenous Community of Maho and the Association of Indigenous Village Leaders in Suriname (VIDS) against The Republic of Suriname
Indigenous peoples in Suriname win important case in the Inter-American Court of Human Rights
Inter-American Court of Human Rights adopts new orders on compliance in the Moiwana Village Case, Suriname. 22 November 2010
Collection of all documents relating to the Twelve Saramaka Clans (Lös) - Case of the Saramaka People v. Suriname
Related link
VIDS website with link and download of the draft laws (Dutch only)
VIDS Facebook page with press coverage, photos and videos (Dutch only)