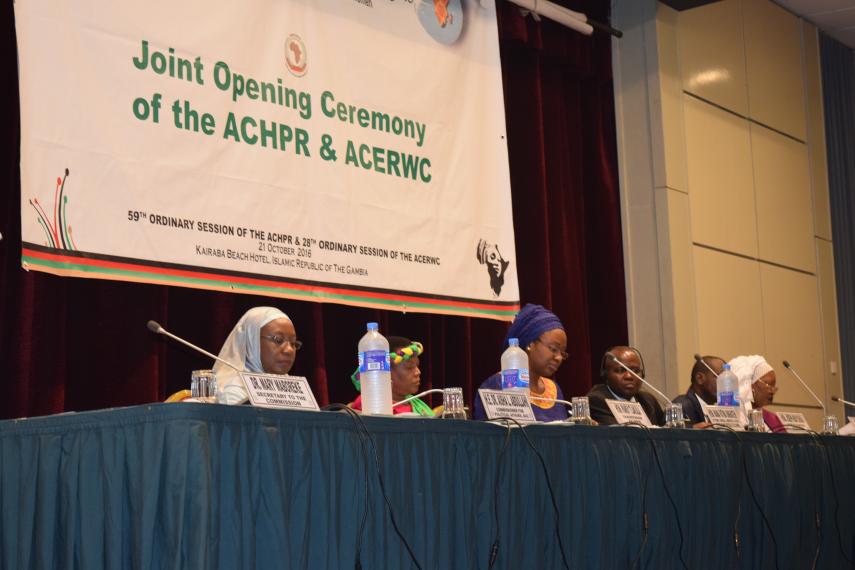 A wide-ranging discussion on the rights of indigenous women in Africa was held last Sunday at the 59th Ordinary Session of the African Commission on Human Rights and Peoples Rights.  The panel, organised by the Commission’s Working Group on Indigenous Populations, looked at different aspects, including access to services, barriers to participation in decision-making and harmful traditional practices.

Particularly burning was the issue of tenure insecurity for indigenous women in the Congo Basin.

Indigenous peoples living in the Congo Basin derive most of their resources from the forests they manage according to community customary law. However, due to land tenure insecurity and the rapid development of activities that impact on land ownership, such as extractive industries and agribusiness, indigenous peoples, with women in the front line, are increasingly vulnerable when it comes to access to land.

Ms. Dorothee Marie Lisenga, Coordinator of the Coalition of Women Leaders for the Environment and Sustainable Development, spoke about the persistent impact of colonialism on the land laws of most countries in the Congo Basin.

During the colonial era laws stated that vacant and ownerless land belonged to the state. Following this colonial legislation, post-independence laws have dispossessed indigenous peoples of their customary rights by transferring land ownership to the state, which became the sole manager of the land (of the soil and subsoil).

After independence, Central African countries established and continue to pursue a dual approach to state land tenure and customary land tenure, with formal acceptance and legal strength recognised only in the former. The inadequate recognition of customary law serves to heighten the land tenure insecurity experienced by indigenous peoples in the region. It also favours the systemisation of large-scale land acquisition, in complete denial of the principle of recognising indigenous peoples’ customary rights to the land and the forests. [1]

With governments in this region aspiring to transform their countries into ‘emerging economies’ over the next two decades through the exploitation of natural resources, indigenous communities in Congo Basin find themselves at the crossroads with regard to the management of their lands and forests.

Communities are also increasingly cut off from the formal economy and from decision-making about the use of natural resources and, because of the insecurity of their land tenure, face the growing threat of expropriation. Women and indigenous peoples continue to be the victims of deeply entrenched discrimination and have very little decision-making power with regard to forest resources – principally limited to usage rights over non-timber forest products.

To be an owner, it is necessary to have land title, the only legal instrument in Central Africa guaranteeing legal access to the land. Local and indigenous communities without land title but who are dependent on the land, have in some cases limited usage rights.[2]  In a number of Central African countries, the law allows the provision of temporary ownership certificates (or registration certificates), on the basis of customary land rights, which are then converted to land titles after registration of the land. However, registration can only take place once the land has been developed, and therefore privileges a particular view of how land is to be appropriately used. Not only is ‘development’ prioritized, but the process for gaining land titles is long and expensive, making it difficult for the communities to even apply.

Women, who represent 60 per cent of the indigenous population in the Congo Basin, are usually more dependent on forest resources. Lack of education, however, makes them particularly vulnerable as they are often poorly informed about their rights.

With customary law often prioritising male land holdings, moreover, indigenous women are increasingly isolated economically and have no other option than taking up unskilled manual jobs in rural areas. There, they suffer a double discrimination: because they are women and because they belong to indigenous communities.

In Burundi, for instance, daughters do not inherit ownership of the family’s land, instead they receive igiseke, a plot of land collectively allocated and used under usufruct, often for their lifetime. There is a widespread view that sharing an inheritance equally between daughters and their brothers would constitute an injustice because daughters would profit from a double succession: one from their parents and another from their parents-in-law, whereas men can only lay claim to a single inheritance from their own family. This approach would cause families to be broken up. Indeed, women from families with very limited land availability would find themselves being repudiated and young men would seek wives from wealthy families with land holdings that they could inherit.[3]

At present, over three-quarters of the rural peoples of sub-Saharan Africa practise customary forms of land and forest management and governance. The issue of land tenure is not simply economic but fundamentally cultural - an aspect of indigenous peoples’ lives to which they are very much attached.

The land tenure reforms currently taking place in the Central African states should no longer be satisfied with substantive recognition of the rights affecting communities’ usage or management rights, but rather the rights of transfer and of alienation, in other words the rights of ownership.

Other forms of discrimination faced by indigenous women in Central Africa

Global Call to Action on Indigenous and Community Land Rights