Gender dimensions in indigenous peoples’ customary use of biodiversity 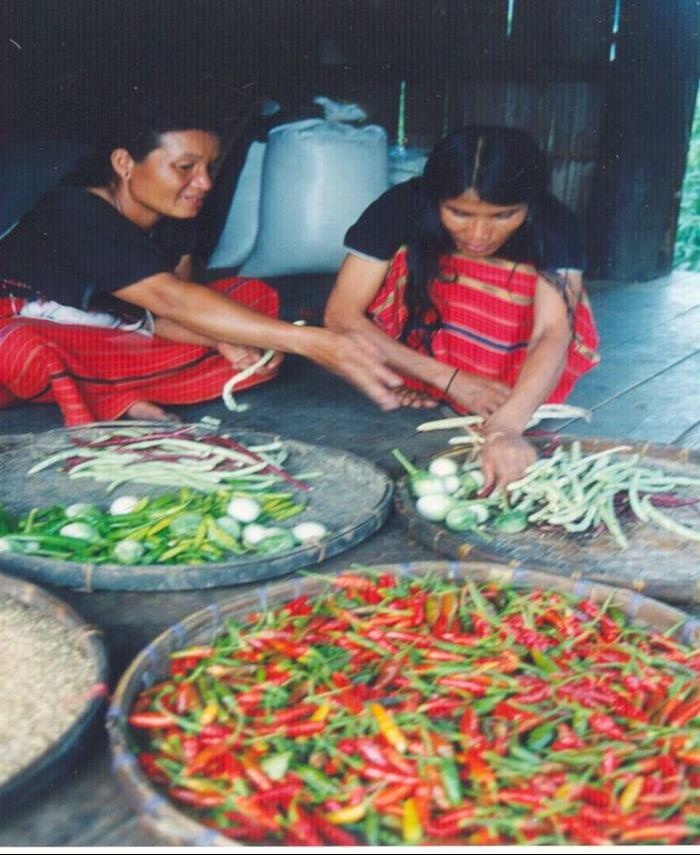 Recent work carried out by various indigenous peoples, such as community mapping and documenting traditional resource use, has resulted in interesting insights into the different gender dimensions in their customary use of biodiversity. In many indigenous communities, there are clear divisions in men’s and women’s roles and tasks relating to biodiversity use. This article shares some examples from case studies carried out by the Wapichan people from South-west Guyana and by the Karen and Hmong people from Northern Thailand.

The illustration below shows a small part of the Wapichan territorial use map; the symbols on the map indicate different activities and resources – for instance places with valuable wood species, fishing grounds, or fruit trees. The map illustrates how some activities are carried out close to the villages, whereas others take place further (and sometimes very far) away - deep in the forests or savannahs or along rivers and creeks. To complete the map and the case study, both men and women were interviewed and involved so that all areas and associated knowledge were incorporated.

Wapichan men mostly use the more remote parts of their territory, which are generally more than 10 km away from the villages and consist mainly of good hunting and fishing grounds. They have extensive knowledge of these distant areas, for instance regarding the occurrence of different types of game and their abundance. Wapichan men also have a very deep understanding of this particular forest environment, knowing where they can find fruits, and useful trees and plants for construction and craft materials. Remote areas of their territory are also used by the marunao (the shaman) who visits key places to perform various rituals, such as far off mountains.

Areas closer to the Wapichan’s villages are mostly used by women and include gathering grounds for craft materials, firewood, grubs and fruits, medicines, spirit charms, as well as water springs and sources. They also regularly use nearby areas to collect clay for pottery, and fishing grounds and washing areas along the creeks. Therefore women hold detailed knowledge of the health and nature of the ecosystems closer to the community.

Karen and Hmong indigenous peoples from Northern Thailand have also engaged in a thorough community-based mapping of their ancestral areas, as well as conducting their own research to document their customary practices and traditional knowledge related to biodiversity use and conservation. Similarly to the Wapichan, women and men in Karen and Hmong communities have different types of tasks and knowledge related to land use, but both are considered to be of equal importance to the community.

The map and diagram below indicate circles of different land use types surrounding Hmong and Karen settlements. These different zones reflect the division of work between men and women: in general, the outer parts of the community’s lands are men’s domain and the women use areas closer to the settlements.

Karen and Hmong women have a number of important roles: they manage the household, taking care of the family and preparing food; they fish, gather plants and fruits, collect seeds for plant and crop breeding and maintain the farming lands; and they collect and use herbal medicines and source natural colours for dying. They are also skilled at weaving, embroidery and whisky making.

Karen and Hmong men have built up considerable knowledge relating to wild animals and they know where to find and how to harvest materials for house construction. Men carry out the tasks involving heavy labour in the fields, including digging the new rice paddies. They also construct houses, make musical instruments and craft metalwork.

In relation to traditional practices and ceremonies, women take care of the preparations while men conduct the actual ceremonies in the forest - some sacred ceremonial sites are prohibited for women. Women carry out most ceremonies at home (for instance those related to preparing food). Both men and women, in particular elders, play an important role in the preservation and transmission of knowledge and language to the children in the community cultural centers.

In a process to demarcate their community farming lands within and/or bordering two national parks, Hmong and Karen women are playing an important role in pointing out the exact farming areas, while men position land posts to physically demarcate the community boundaries.

In general, Karen and Hmong men attend more trainings and meetings outside the community and they learn more new skills and technologies. Women have the opportunity to participate, but sometimes this is limited because they lack a good command of the languages being used or they are not familiar with the topics being addressed. Women tend to spend less time away from the home due to the need to attend to daily household tasks. For this reason women have withdrawn from mapping exercises, which involve many long fieldtrips.

Hmong and Karen men attend external events and are responsible for sharing information with their communities through village and watershed network meetings. Women have their own groups and networks for sharing information, knowledge and skills, for example on garden bio-diversity management, food preparation and animal husbandry.

Interestingly, women are given the lead role in critical negotiations over ancestral land boundaries with government officials. According to the Karen and Hmong, the fact that women are even-tempered benefits the dialogue and they are seen as naturally skilled in resolving conflicts.

The key overall aspect that was highlighted in both the Wapichan and Hmong/Karen communities’ case studies was that women and men play diverse but complementary roles for the sustainable functioning of their communities.

To read the full reports from Guyana and Thailand and other case studies by indigenous peoples and local communities from Suriname, Bangladesh, Cameroon and Venezuela on their customary use of biological resources please visit: 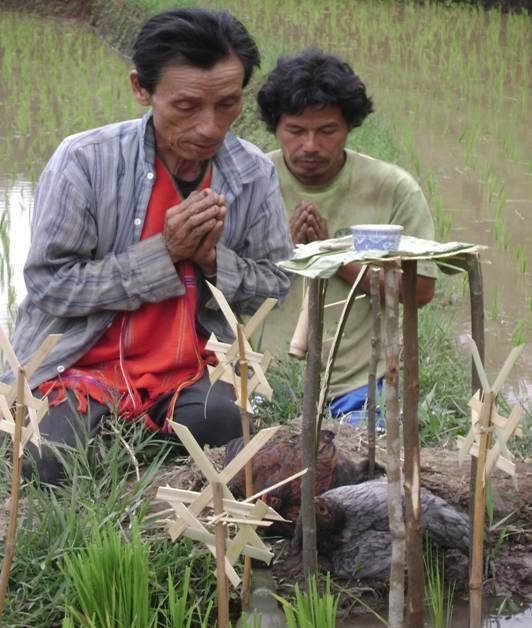 Karen men carrying out a ritual ceremony
By
IMPECT 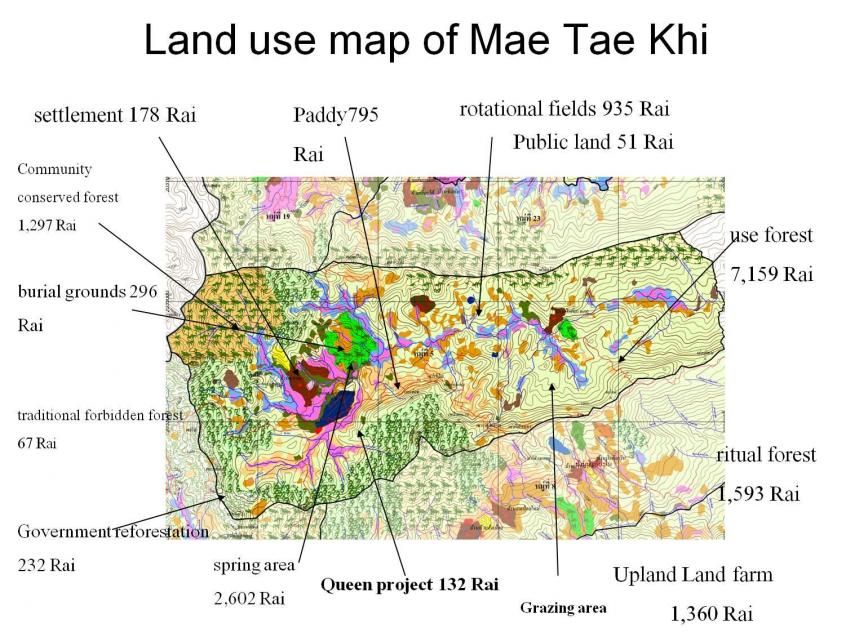 Land use map of Mae Tae Khi
By
IMPECT 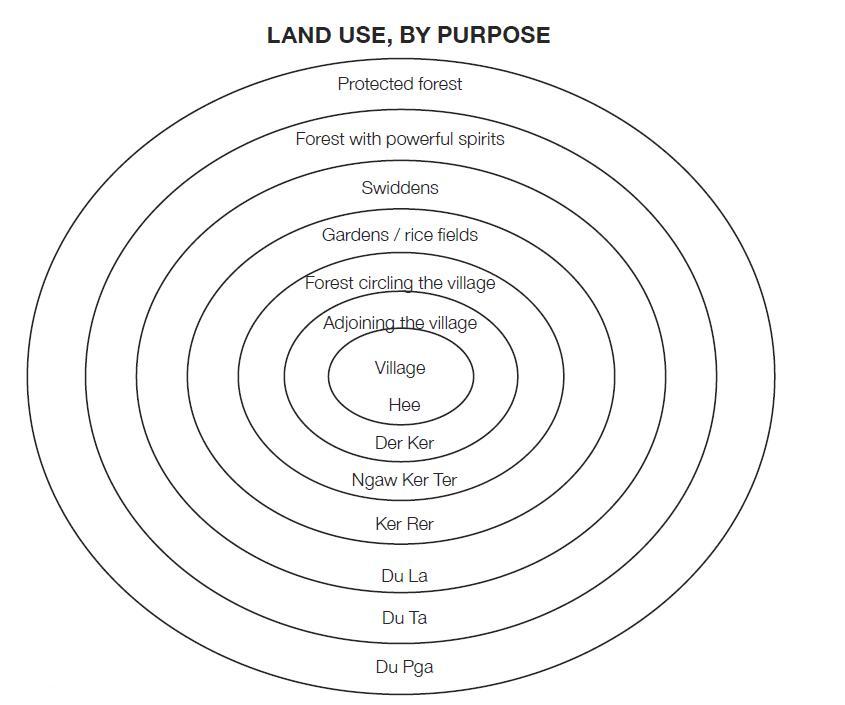 Diagram of land use, by purpose
By
IMPECT
Related content
Customary sustainable use of biodiversity by indigenous peoples and local communities: Examples, challenges, community initiatives and recommendations relating to CBD Article 10(c)