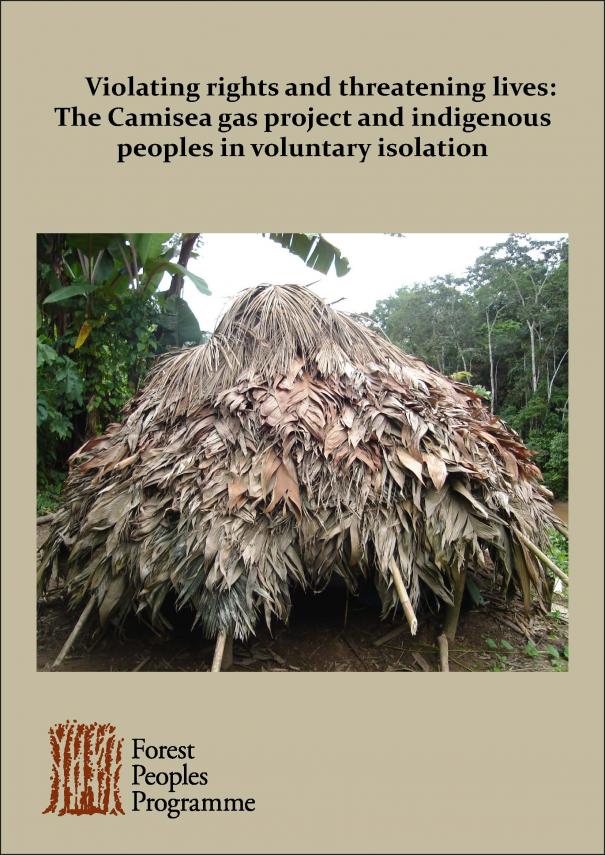 Groundbreaking research reveals severe impacts of the Camisea gas project on isolated indigenous peoples in the Peruvian AmazonOxford, UK (20 January 2014) – A Forest Peoples Programme report published today reveals the severe impacts of Peru’s biggest gas project on indigenous peoples in “voluntary isolation” (isolated peoples) in the Amazon, including epidemics, disease and forced and hostile contacts caused by project operators. The report is published at a crucial time as the project consortium led by Pluspetrol is seeking approval for a massive planned expansion.  These plans are currently on standby as project operators await formal approval from Peru’s Ministry of Culture which has already withheld endorsement on two separate occasions in part because of the risks the project poses to isolated peoples . However, the project now appears to be on the brink of being approved as on the 13th January 2014 Pluspetrol formally responded to the 3 outstanding ‘observations’ made by the Vice-Ministry of Inter-culturality. The study draws on a variety of sources including, amongst others, the reports of government ministries and project operators, the project’s own environmental impact assessment (EIA), and its financial backers the Inter-American Development Bank (IDB), many of which highlight that the project’s massive expansion plans are likely to intensify these impacts for isolated peoples. As a result, the expansion plans are liable to result in a range of impacts including further undesired contacts, increased epidemics and death rates, and reduced access to game, fish stocks, gardens and the forest for vital subsistence activities. The report concludes that the expansion plans threaten the existence and survival of the isolated indigenous peoples who live within a 450,000ha Reserve overlapped by the Camisea Project, and thereby ‘constitute illegal acts under international law’. The report recommends the Peruvian government take immediate steps to abandon the expansion plans within the Reserve and thereby safeguard the rights of isolated peoples.The findings, which for the first time have synthesised the results of dispersed reports, contradict the continued insinuations of project operators and government ministers that isolated people either do not exist within the Reserve or that the expansion plans present no threat to them. “The expansion of the Camisea gas project represents one of the most serious threats to the lives and rights of isolated peoples in the world,” said Joji Cariño, Director of Forest Peoples Programme. “If Peru’s Ministry of Culture sanctions the project it will be responsible for undermining the lives of isolated peoples within the Kugapakori, Nahua, Nanti Reserve as well as their rights to determine their own futures. It will also constitute a grave violation of Peru’s international human rights obligations”United Nations human rights bodies have also urged the Peruvian government to suspend the project most recently in December 2013 when, after a visit to the project area, the UN Special Rapporteur on the rights of indigenous peoples recommended that authorization for the project be withheld until measures had been taken to ‘ensure conclusively that their [isolated peoples’] human rights would not be violated’ .In March 2013 the United Nations’ Committee on the Elimination of Racial Discrimination (UN-CERD) urged the Peruvian government to ‘immediately suspend’ the expansion of the Camisea gas project. Indigenous organisations in Peru including FENAMAD  and AIDESEP  have repeatedly voiced their concerns about the expansion plans including a visit to Washington in November 2013   when they condemned the expansion plans at a hearing at the Inter-American Commission on Human Rights as well as their announcements that they will file a lawsuit to challenge the plans .  The expansion plans include drilling 18 new wells, conducting intensive seismic testing over hundreds of square kilometres and constructing an approximately 10.5km ‘flowline’ within the Reserve.The Reserve was established in 1990 to protect and safeguard the lives, lands and rights of its isolated indigenous inhabitants. Isolated indigenous peoples are those people with minimal or no contact with wider society and who are classified as being extremely vulnerable due to their lack of immunity to introduced diseases which can prove lethal if they are exposed to them and their vulnerability to any change in their forest environment due to their exclusive dependence on the forest for subsistence means. The Vice-Ministry of Inter-culturality, situated within Peru’s Ministry of Culture, is the Peruvian government’s institution responsible for issues related to indigenous peoples and the protection of their rights.Violating rights and threatening lives: The Camisea gas project and indigenous peoples in voluntary isolation is available to download here.For more information please contact: press@forestpeoples.org