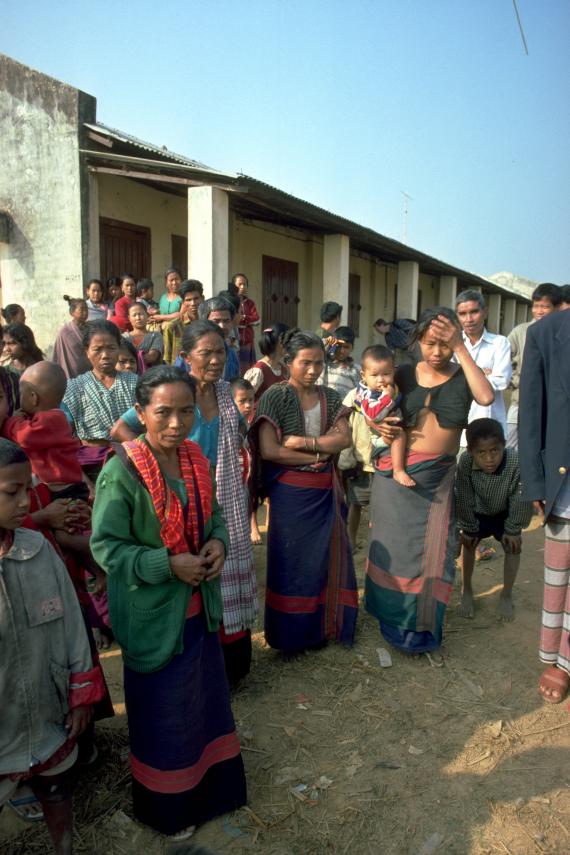 “To address the specific situations faced by indigenous women, the collective rights of indigenous peoples must be recognized as part of protecting the individual rights of indigenous persons. Interpretation and application of human rights treaties concerned with individual rights, including the Convention on the Elimination of All Forms of Discrimination Against Women (CEDAW), should happen with reference to the UN Declaration on the Rights of Indigenous Peoples”

Recommendation made to the Committee on the Elimination of Discrimination Against Women (CEDAW Committee) by AIPP, NIWF and FPP

Indigenous women face a multitude of forms of discrimination, as highlighted recently in a submission to the Committee on the Elimination of Discrimination Against Women (CEDAW Committee) by the Asia Indigenous Peoples Pact Foundation (AIPP), the National Federation of Indigenous Women (NIWF) and the Forest Peoples Programme. The submission focused on the need to specifically and appropriately consider the rights of indigenous women in the application of law to protect the rights of women – to address both issues related to indigenous status as well as issues related to gender.

The reason for this submission was to influence the development of specific jurisprudence on how international law is applied to the circumstances of indigenous women. The CEDAW Committee is currently developing a ‘General Recommendation’ – a guiding piece of legal interpretation that explains how the Committee expects to see the Convention applied by States. The Committee makes recommendations on any issue affecting women to which it believes the States parties should devote more attention. The Committee has already developed thirty General Recommendations addressing various aspects of the Convention, but none have yet dealt with the intersection of ethnic or racial discrimination and gender discrimination.

The current General Recommendation is specifically intended to deal with the application of Article 14 of the Convention, an Article that deals with the rights of women in rural areas. Given the fact that the customary lands and resources of indigenous peoples are often remote from urban centres, there is a clear overlap between rural women and indigenous women. Perhaps unsurprisingly then, the areas dealt with in Article 14 mirror in part those areas dealt with under the UN Declaration on the Rights of Indigenous Peoples (UNDRIP). Article 14 highlights particular rights that need to be carefully considered and protected for rural women including the right to participate in agrarian reform and land resettlement schemes;[1] to education and training programmes;[2] to participate in development planning;[3] to participate in community life;[4] to access health services[5] and more. All of these rights are also referred to and protected in the UN Declaration on the Rights of Indigenous Peoples in the context of the collective rights of indigenous peoples. However, the emphasis placed on how these rights are to be best protected and even the full content of these rights does differ between the two international instruments and coherence between them must be found. In the end, effective protection against the multiple forms of discrimination that indigenous women face requires, indeed demands, application of the multiple laws designed to protect them.

In recent years, indigenous women from various corners of the world have consistently sent this same message to the CEDAW Committee as well as other human rights mechanisms. Alternative reports from indigenous women’s organisations in Uganda, Nepal, the Democratic Republic of Congo and Colombia have also substantially influenced the CEDAW Committee’s jurisprudence. Also, indigenous women in Latin America are currently preparing a document that aims at guiding the Inter-American Commission on Human Rights in relation to dealing with cases involving indigenous women’s rights violations.  They presented an overview of the information at a hearing held by the Commission in March 2012.

[1] Article 14(g) “(g) To have access to agricultural credit and loans, marketing facilities, appropriate technology and equal treatment in land and agrarian reform as well as in land resettlement schemes”, CEDAW (emphasis added).

[2] Article 14(d) “To obtain all types of training and education, formal and non-formal, including that relating to functional literacy, as well as, inter alia, the benefit of all community and extension services, in order to increase their technical proficiency”, CEDAW

[3] Article 14(a), “To participate in the elaboration and implementation of development planning at all levels”, CEDAW

[4] Article 14(f), “To participate in all community activities”, CEDAW

[5] Article 14 (b), “To have access to adequate health care facilities, including information, counseling and services in family planning”, CEDAW