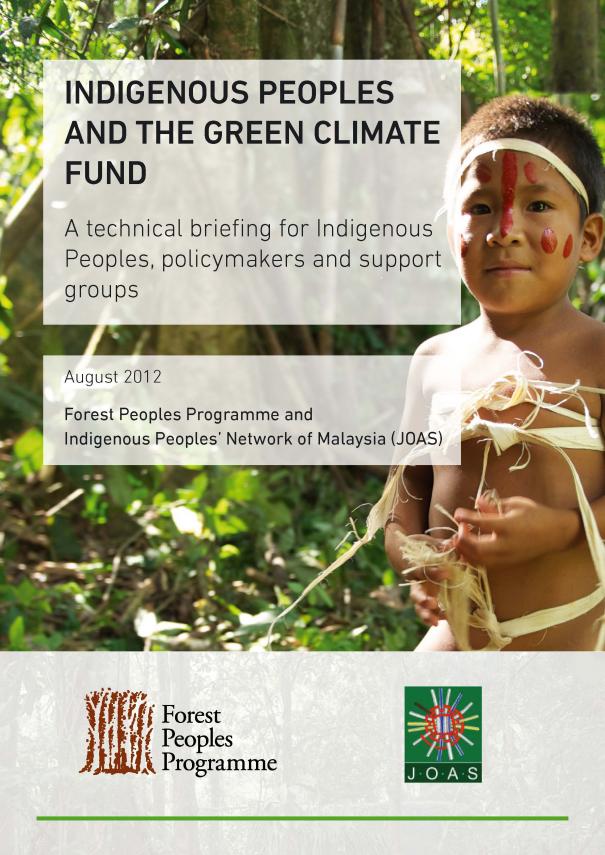 Read the report in English or in Spanish.

This report summarises some key issues relevant for indigenous peoples, building on statements and policy platforms adopted by Indigenous Peoples’ Caucuses. In particular the report draws attention to the need for the GCF to improve indigenous peoples’ participation in governance, adopt stronger safeguards and facilitate direct access to financing for climate change response actions developed and implemented by indigenous peoples.

The report also provides a detailed overview and analysis of the process that led to the setting up of the Green Climate Fund and is meant to be an informative tool for indigenous peoples and other actors interested in the Fund's activities.

The report identifies a number of key areas in which the GCF must act to better support the participation of indigenous peoples. These include:

B. Safeguards and indigenous peoples' rights - For indigenous peoples a key area of concern is the degree to which the GCF safeguards will be aligned to international obligations such as the UN Declaration on the Rights of Indigenous Peoples (UNDRIP) and Free, Prior, Informed Consent (FPIC). There is a need for a clear mechanism for assessment of compliance with safeguards and GCF rules, backed by a GCF recourse mechanism and participatory systems for Monitoring, Reporting and Verification (MRV).

Some Parties to the UN Framework Convention on Climate Change (UNFCCC) are considering the Global Environment Facility (GEF) Social and Environmental Safeguard Standards (SESS) as a basis for the development of a GCF framework.  This is a cause for concern since the GEF minimum standards do not meet existing international standards on indigenous peoples as set out in the UNDRIP and related human rights instruments

C. Direct Access to funding - Indigenous peoples call for direct access funding windows for indigenous peoples under adaptation and mitigation. While direct access is referred to in the Durban decision, this currently refers to national governments and the ability of accredited national implementing entities to access the funds.  An innovation of the GCF is a special facility to enhance private sector participation. There are strong benefits for creating a similar specific finance facility under the GCF to enable indigenous peoples direct access to small, discrete funds that would strengthen the contributions of indigenous and local knowledge in climate change adaptation and mitigation and support self-determined development.