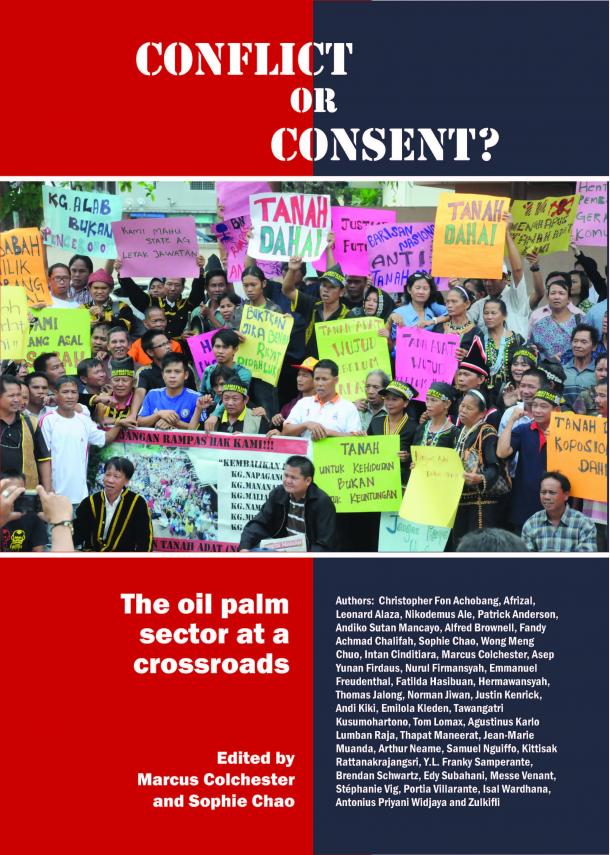 EDITOR’S NOTE: For the full publication, “Conflict or consent? The oil palm sector at a crossroads”, and supporting materials, please visit: http://www.forestpeoples.org/press-room

MEDAN, INDONESIA (7 November, 2013)—Members of the Roundtable on Sustainable Palm Oil (RSPO) are violating the rights of indigenous peoples and local communities in the forests and peatlands of tropical nations worldwide, according to a new research publication released today. The study details the performance of 16 oil palm operations, many run by RSPO members, reporting on their failure to uphold human rights and environmental standards required.

“Since its founding eight years ago, the RSPO has adopted good standards, but too many member companies are not delivering on these paper promises,” said Norman Jiwan, Executive Director of Transformasi Untuk Keadilan Indonesia, a human rights organisation based in Jakarta. “The RSPO could still meet this challenge if it provides remedies for member companies’ impacts on communities, but for that we need much stricter enforcement. The organisation’s very credibility is at stake.”

The book, Conflict or consent? The oil palm sector at a crossroads, details cases in which palm oil producers have failed to obtain permission from communities—a process required by the RSPO based on the UN mandate that is known as free, prior and informed consent (FPIC). The findings also support accounts of the destructive impact that the palm oil developments are having on indigenous peoples and local communities.

Advocates plan to circulate this research at the annual meeting of the RSPO, which takes place on 11-14 November in Medan, North Sumatra. Their outreach focuses on three themes:

The growing global demand for palm oil is fuelling the large-scale expansion of oil palm plantations across the forests of Southeast Asia and Africa. Concerns about the resulting environmental and social impacts led to the establishment of the Roundtable on Sustainable Palm Oil in 2004. The RSPO maintains a certification standard for operations that both respect the rights of indigenous peoples and local communities living on the land affected by plantations and also conserve lands and forests with high conservation value.

“So much effort has been invested in the RSPO and the International Finance Corporation’s dispute resolution mechanisms, but to little avail,” said Jefri Saragih, Executive Director of Sawit Watch, a founding member of the RSPO. “We can point to one or two good results on the ground, but there are thousands of land conflicts with oil palm companies in Indonesia alone, and the problem is now spreading to other parts of Asia and Africa. We are calling for an urgent and vastly expanded response to this crisis.”

While a number of RSPO member companies have adopted new operational standards and procedures, improved their practices on paper, and even received certification for some of their operations, the reality on the ground suggests business-as-usual. Senior company officials may have committed to the new approach, but too often operational managers in the field—lacking the necessary training and incentives—have failed to respond. Procedures to provide remedy for impacted communities are also deficient.

“Underlying this failure of ‘voluntary best practice’ are national laws and policies which deny or ignore indigenous peoples’ and communities’ land rights,” said Marcus Colchester, Senior Policy Advisor at Forest Peoples Programme, an international human rights organisation. “In their rush to encourage investment and exports, governments are trampling their own citizens’ rights. Global investors, retailers, manufacturers and traders must insist on dealing in conflict-free palm oil, and national governments must up their game and respect communities’ rights.”

Indonesia Leads in Both Palm Oil Production and Deforestation

Southeast Asia is the epicentre of the palm oil industry. Indonesia, where the RSPO meeting will take place, is the world’s largest producer and exporter of palm oil, with 10.8 million hectares of land planted with oil palm trees, a number projected to expand to more than 20 million hectares—more than 10 percent of the entire country—by 2020. Indonesia also ranks third in the world for carbon dioxide emissions, primarily because of deforestation and destruction of the nation’s peatlands.

Many of the Indonesian plantations, along with processing plants and other facilities in the palm oil supply chain, are based in Sumatra, making Medan the unofficial capital of Indonesia’s palm oil industry. The city is bracing for street theatre and protests during the RSPO meeting.

Free, Prior, and Informed Consent: Unimplemented and Under-enforced

The 16 case studies in the research reveal that the RSPO process has at times led to an improved understanding of the key issues, both for communities and companies, in achieving ‘sustainable development’ based on respect for fundamental human rights. Some of the procedural improvements may provide a basis for resolving land conflicts, and several companies have responded positively and adjusted their operations to better accommodate community livelihoods and demands.

But many more RSPO companies are running highly abbreviated processes to secure community consent, which are far from being ‘free’, ‘prior’ and ‘informed.’ In the concession of PT Permata Hijau Pasaman I, a subsidiary company of Singapore-based multinational company Wilmar International, in West Sumatra, Indonesia, the process of land acquisition was characterised by selective consultation between the company and co-opted community representatives. In the case of Tanjung Bahagia Sdn Bhd, a subsidiary of Genting Plantations, lands and forests have been cleared and planted despite sustained objections from the communities.

Many companies are also failing to follow the RSPO procedures by not taking the requisite steps to recognise customary rights. In West Kalimantan, Indonesia, there has been collusive manipulation of the concept of customary rights by personnel from PT Agrowiratama, a subsidiary of the Indonesian Musim Mas group, in favour of local elites over local Melayu land-user communities. In East Kalimantan, Indonesia, PT Rea Kaltim Plantations, owned by British company REA Holdings PLC, did not undertake participatory mapping or land tenure surveys before acquiring land. This has now been recognised by the company, however, and mapping has begun.

Lack of Enforcement Triggers Conflicts and Withdrawal from the RSPO

The trampling of rights often spurs uneven conflicts, where protests from local communities are met with arrests and physical assaults. SG Sustainable Oils Cameroon PLC in South West Cameroon, owned by American company Herakles Farms, actually withdrew its membership of the RSPO in September 2012 in reaction to a formal complaint lodged against it and widespread criticism of its project. In PT Permata Hijau Pasaman I, conflict between the company and local communities has led to various arrests and an on-going court case at the Supreme Court of the Republic of Indonesia.

The studies also show that existing conflict resolution mechanisms, including those of the RSPO, have yet to produce tangible results for local communities. Both the International Finance Corporation (IFC) Compliance Advisor/Ombudsman (IFC CAO) and RSPO conflict resolution processes, despite having established some important precedents, lack both the mandate and the capacity to remedy the huge number of disputes between companies and communities.

Lack of company goodwill and transparency further hinder the effectiveness of the IFC CAO mechanism. In PT Asiatic Persada (PT AP) in Jambi, for instance, the company bulldozed the dwellings of community objectors into nearby creeks. IFC CAO mediation was initiated in 2012 but has come to a standstill due to the sale of PT AP by Wilmar without any due consultation with community members engaged in the mediation process. Wilmar effectively washed its hands of the concession and the problems it created.

“The RSPO only works if the commitments its members make are genuine,” concluded Marcus Colchester of Forest Peoples Programme. “RSPO certification was not meant to be a marketing ploy. It was meant to represent a wholehearted dedication to respecting the lives and livelihoods of indigenous peoples and local communities, and the lands that they call home. As an RSPO member, we are calling on the RSPO as a whole to reassert this commitment and live up to it.”

FPP works with forest peoples in South America, Africa, and Asia, to help them secure their rights, build up their own organisations and negotiate with governments and companies as to how economic development and conservation are best achieved on their lands. The vision of the organisation is that forests be owned and controlled by forest peoples in ways that ensure sustainable livelihoods, equity and well-being based on respect for their rights, knowledge, cultures and identities. FPP has also done extensive work in Southeast Asia on legal pluralism and the opportunities and challenges experienced by indigenous peoples and local communities as a result of plural legal regimes. In addition, FPP is also engaged in research, advocacy and fieldwork related to oil palm expansion in Southeast Asia and its socio-cultural, economic and environmental impacts. For more information please visit www.forestpeoples.org.

Sawit Watch was set up in 1998 and since then, has built a network of over 130 members and local contacts working with dozens of local communities in Sumatra, Kalimantan and Sulawesi. The mandate of Sawit Watch is to support local communities who have lost their forests and livelihoods due to large-scale oil palm expansion, and to support those in forestlands who continue to resist this development. Through this mandate, Sawit Watch works towards the conservation and restoration of Indonesia’s forests and promoting the best deals possible for those communities who choose to live within oil palm plantations. In addition to community awareness raising activities, they are involved in assisting communities secure their land rights and sustain their traditional community (adat) laws. Sawit Watch also assists communities in developing or maintaining economically, socially and ecologically sustainable land and forest management. For more information please visit www.sawitwatch.or.id.

Transformasi untuk Keadilan Indonesia (TuK INDONESIA) is an Indonesian NGO based in Jakarta that works on the environmental, natural resource and human rights impacts of development in Indonesia. TUK INDONESIA advocates for the fulfilment of the constitutional rights of the Indonesian people for the realisation of justice, well-being and human integrity. Its mission is to empower Indonesian CSOs and communities through capacity-building and education; to promote recognition, protection, fulfilment and respect for human rights; to strengthen cultural values and local wisdoms in natural resources management and environmental protection and management and; to advocate for the sustainable management of natural resources and the environment.

Conflict or Consent press release_FINAL_7nOV_Eng.pdf406.22 KB
Conflict or Consent press release_FINAL_7Nov_Bahasa.pdf402.14 KB
Related content
PRESS ROOM: 'Conflict or Consent? The oil palm sector at a crossroads'
MEDIA ADVISORY - Sustainable Palm Oil: Marketing Ploy or True Commitment?
Liberia: Communities call for a halt of plantations of Equatorial Palm Oil and appeal to RSPO
Press Release - Indonesia: The Governor of Jambi Province must take action to tackle unscrupulous conduct of palm oil plantation PT Asiatic Persada
Indonesia: Oil palm giant Wilmar lets down local communities yet again and jeopardises their futures
“They want to take our bush”: An independent assessment of processes employed by Herakles/SGSOC to obtain the Free, Prior and Informed Consent of communities to be affected by their palm oil development in South West Cameroon