Cameroon's Baka people and the art of listening for honey bees 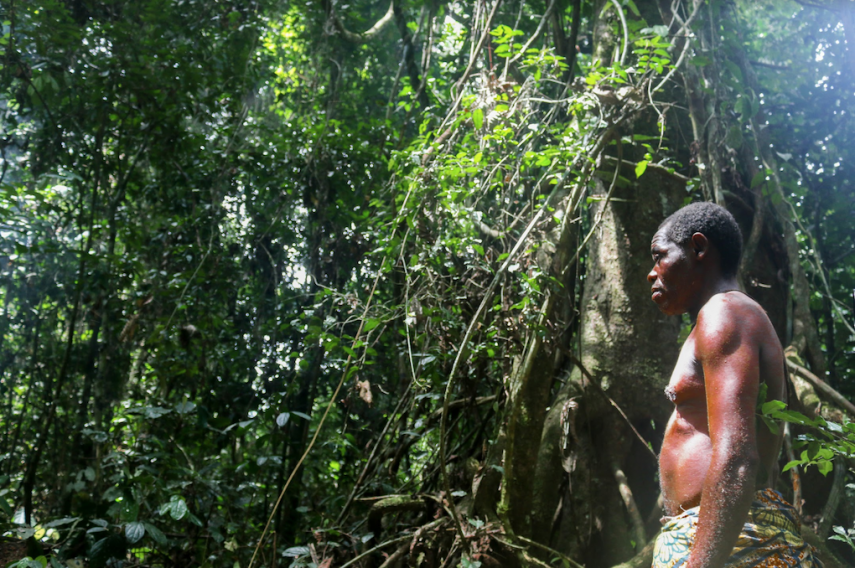 As a small child, Daniel Dindo learned how to travel deep into the rainforest of Cameroon and climb trees to collect honey without harming the bees or damaging their hive. But now, the land where he continues to practice these traditional activities has been declared a protected area, and Daniel wonders what this will mean for the future of his village and his indigenous Baka culture.

The creation of the 156,672 hectare Ngoyla Wildlife Reserve, in south Cameroon, has already caused dramatic changes for the Baka, the indigenous hunter-gatherer peoples who live nearby. A section of the reserve, some 7km away, has been designated as an area where Daniel and his neighbours will be able to gather some forest products, but they will no longer be able to head into the densest, most remote part of the forest, and the only places where certain trees grow.

As partial compensation for the loss of forest access, communities surrounding the reserve have been offered small tracts of land, called community forests. But in the village of Assoumindelé, where Daniel lives, the land behind their homes has been designated as the community forest of the neighbouring Bantu village. The Baka of Assoumindelé will therefore have to walk 10km to reach their allocated land.

Daniel and many of his fellow villagers are trying to take a pragmatic approach, hoping new opportunities might be offered instead. For example, honey harvested from the forest served as both food and traditional medicine for the Baka, and so Daniel wonders if the future could involve beekeeping. However, he worries that this could result in the traditional beliefs around the practice of gathering honey dying out.

“Now that there’s the reserve we won’t be able to go and collect honey like we did before, so what will the Baka who love honey do? The majority of the bee trees will be inside the reserve. Perhaps hives are the solution, if we could be shown how. It would be less dangerous, and we could even earn some money, but it would reduce our traditional practices.” 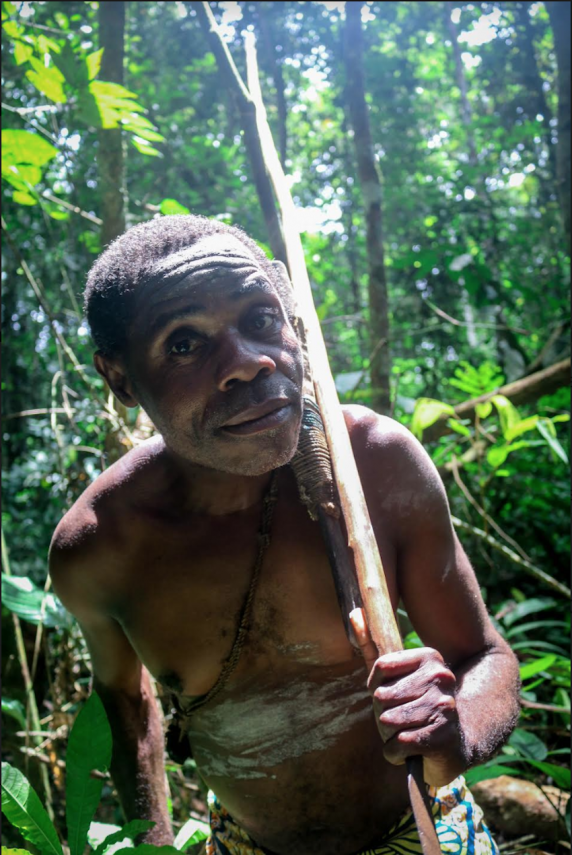 Listening for the sound of bees

To find honey, we walk in the forest and follow the buzzing of the bees. There are bees that fly high, and another type that flies low. We can also follow the sound of the queen bee, nyabome, but you need to have good hearing.

We can follow bees very early in the morning, before people are awake, at around 5am. We go for a little walk in the forest and listen for the buzzing. We call this early work makelo. Or we go in the evening, between 3pm and 7pm, when they make a different sound. We call this mongombé.

In the morning, when the bees buzz it’s soft. In the evening after 3pm, between the sun’s rays there’s a great buzzing sound because there’s not so much noise from the birds. 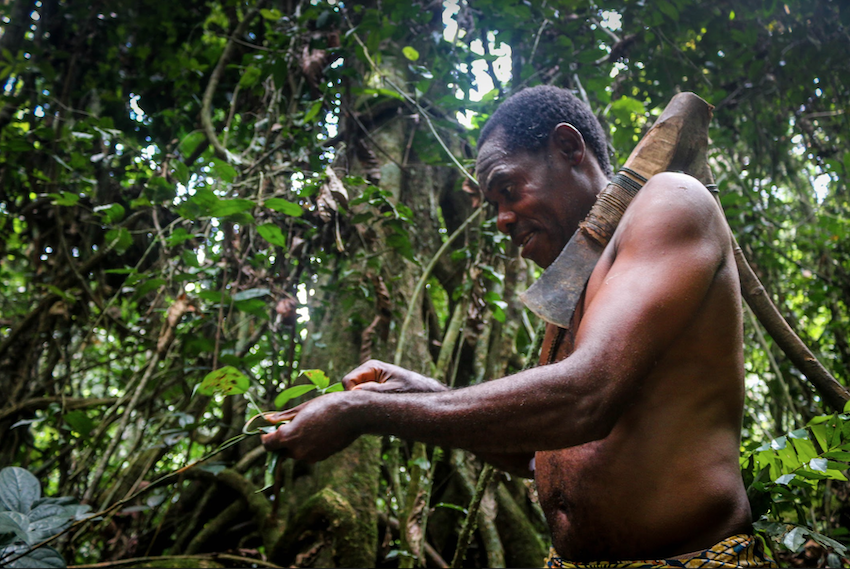 Seeking honey in the Cameroon forest

Another way to collect honey is to go into the forest, under the trees, and to look on the ground. There you may find dead bees, the heads and the wings, and you can look up the tree and you will find their nest. This is called libendji.

Once you’ve found the honey, you make a mark in the tree to say you’ve found it, and it’s your honey to collect. You go back to your village to get ready and tell others what you’ve found. 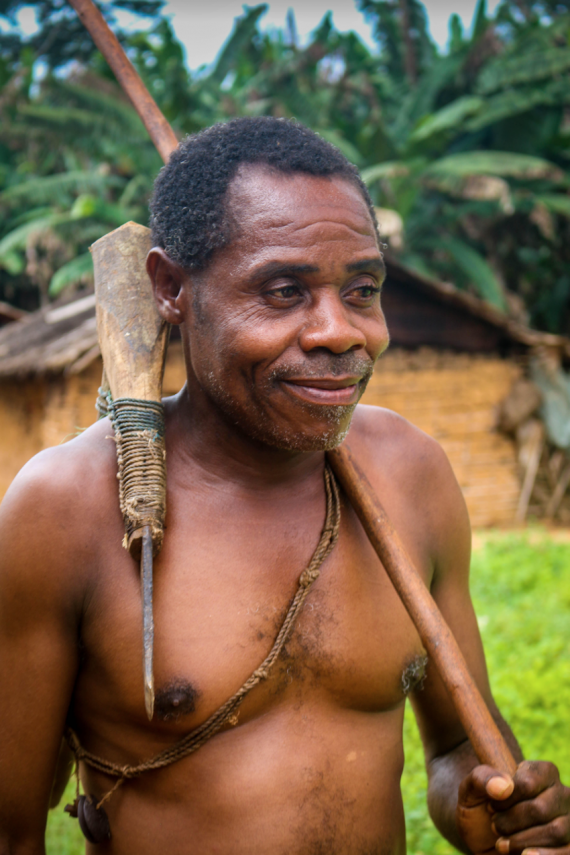 Daniel Dindo prepares to collect honey from the forest

To get ready, you first form a small group, then collect fire, a machete, a hoe (kopa) and a basket (pèndi). To take fire, you either collect a bit of wood that’s burning or hot with embers – called sawala – or a fire bag, which contains a stone, iron, and some cotton from a palm tree.

One of the older women puts ash on me for good luck so I quickly find what I need, and I wear a talisman – a string of lianas with a bit of wood – for power. Before I climb the tree, I put leaves in my mouth so the bees don’t sting too much.

We set up in the forest. 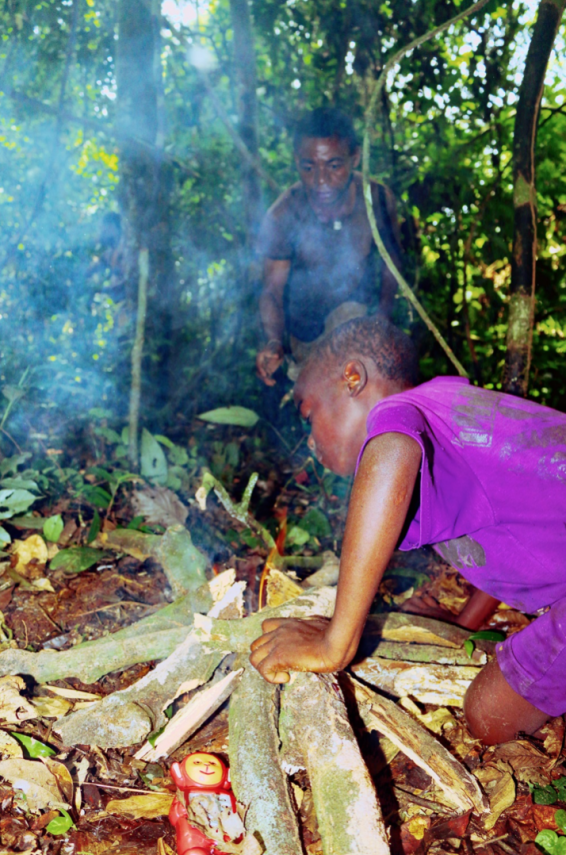 Samuel Ayom, a child, lights the fire under the watchful eye of Armand Melinga, an older member of the group

Honey collection is something both men and women can do. Women can collect if it’s low down. If we have to climb the trees, there are specialists because it’s dangerous. People have died from falling. People who don’t know how to climb can cut the trees, but our grandparents didn’t like this method, as it ruined the tree and killed the bees. My father and grandfather taught me to climb. It was done gently and slowly, and now I teach others.

Children are scared at first to climb. They need to be taught regularly. We started low and increased in height as I learned to tighten the belt. I started learning when I was about eight years old; I would go with my father and watch him, and I was light so it was easy to climb. Before climbing, we make a fire next to the tree, and take a burning ngongo leaf, which we make into a little bucket. 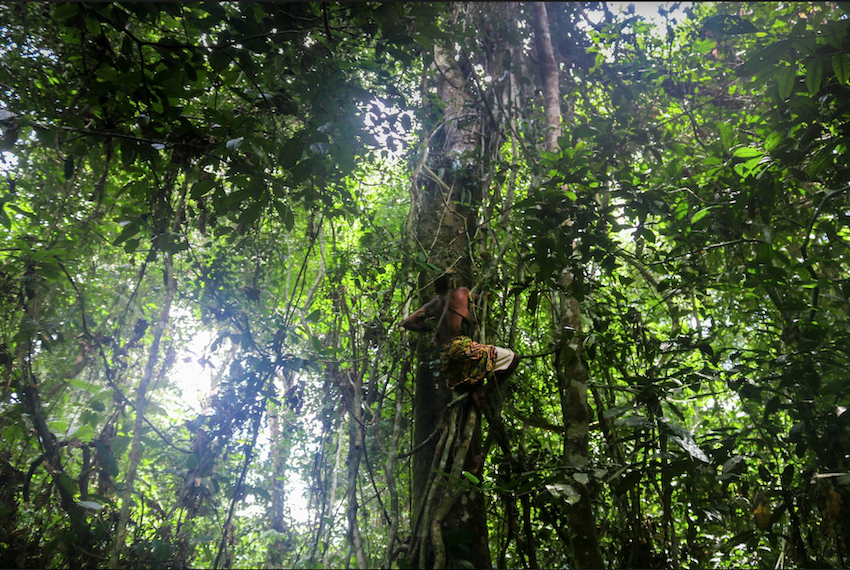 Once we get to the tree, we look for lianas – “ropes” in the forest – and use them to climb up. Or, depending on the tree, we can climb up without them, but we use the lianas to attach the basket and send it up and down the tree with the honey.

I climb the tree, get to the top, and block the belt so I can do my work. I start to pierce the hive with the machete and my wife or friends send up the basket with the fire. I take the fire, which I call the yanji, and put it in the hive so that the smoke makes the bees sleepy. 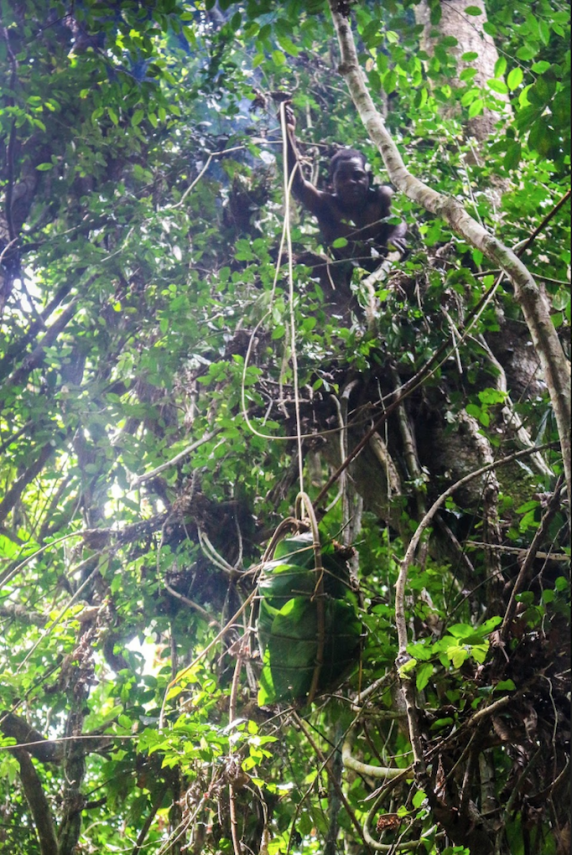 Lowering the honey from the tree

Then someone sends up the basket and I lift the honey ridges out of the hive. The basket lowers them down safely and we lay the honey on the ground. We send the basket up again if there is more honey.

We never take it all. We leave three strips of honey and close the nest up with leaves and grass so the bees can come back safely. I climb down. Collecting honey is not an easy job because bees sting, but honey is an antibiotic, so the stings also heal. A bee sting can hurt, but once that’s passed, you will have lots more energy. 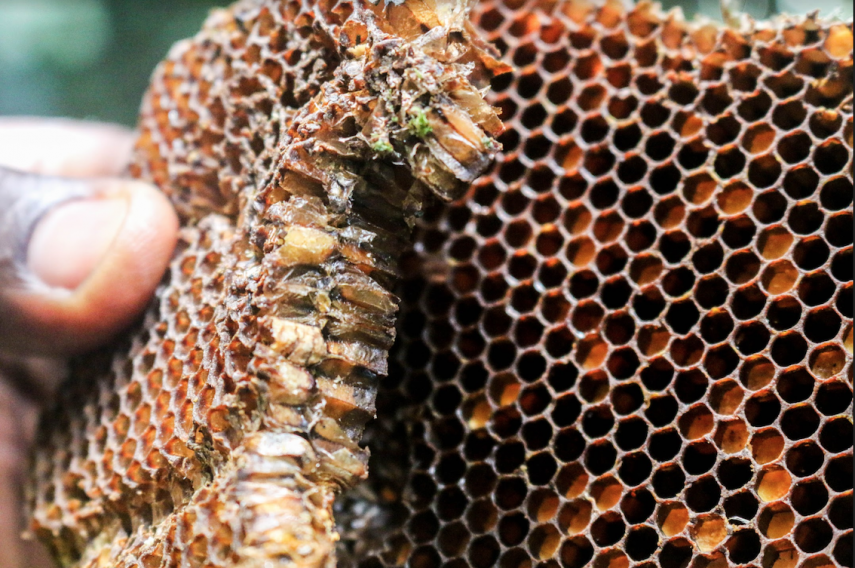 Honey is seasonal. We wait for the corn. When it’s ripe, we know that the honey is good.

There are six varieties of honey – some bees fly high, some fly low, some attack and some don’t. Each tastes different: some are very sweet, some are bitter, some give diarrhoea, but all honey is good, so we have no favourite. Because the bees collect such a variety of vitamins from many plants, when we eat the honey, this goodness goes into our bodies.

Different honeys have different names. For example, honey that is like sand – it’s gritty – is called kanga and is ready in March. Honey that is hard and bitter in April is bouabala. Today’s honey is called pambo; it’s sweet and soft because the flowers are bright at the moment. 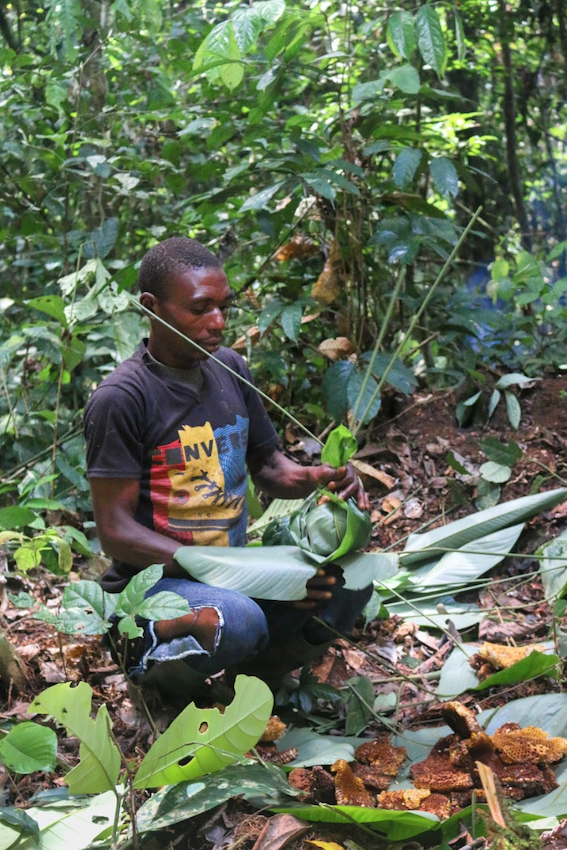 Together we all share out the honey. We make as many packs as there are people. 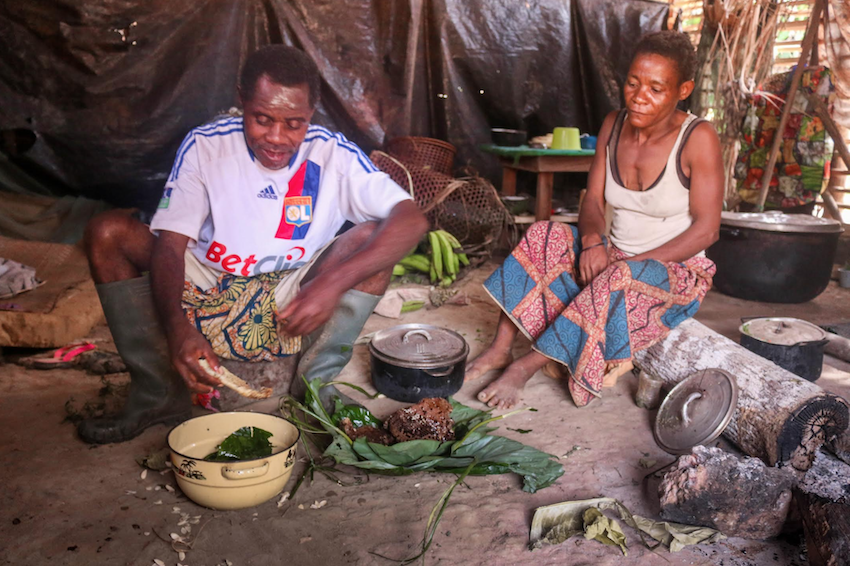 Daniel and his wife, Melanie Yayé, share the honey

After I return home, we use the honey. Honey can be eaten alone, but also dipped with manioc, plantain or bread. Honey has lots of uses – you can eat it, or use the liquid honey to make honey beer. Honey can also be used to heal pulmonary infections or a a child’s cough, and it is a remedy for people who are tense.

To cure a cough, when we’ve finished eating, we take what’s left and burn the wax with leaves, blowing the smoke into the face of a child who has is congested. We blow it into the child’s nose and eyes and it unblocks them.

If you burn yourself, you can apply honey to soothe it. It’s also good for childbirth. Honey and sugar together can be drunk to give women strength in labour. 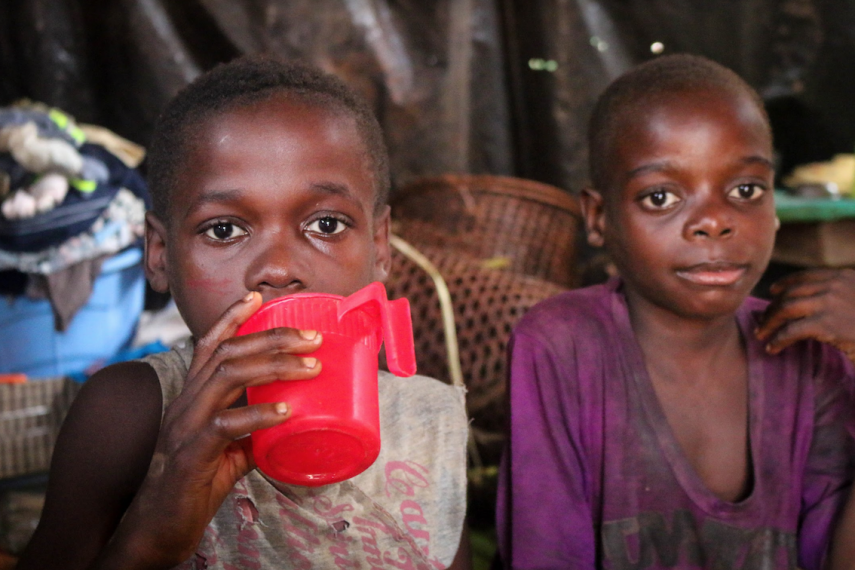 We can also make a remedy for people who are scared of seeing animals in the forest. We mix it with traditional medicine leaves called nganda and drink it. This drink is called njambo. This will make you sick and you will bring up lots of maggots, but after that you will no longer be scared to go into the forest.

This article was funded by Land Rights Now.

Related content
“It’s important for the Baka to have a forest space where they can carry out their activities”
The Ngoyla-Mintom forest in Cameroon: The perspective of the Baka
The indigenous peoples of Cameroon: from Ngoyla-Mintom to national recognition