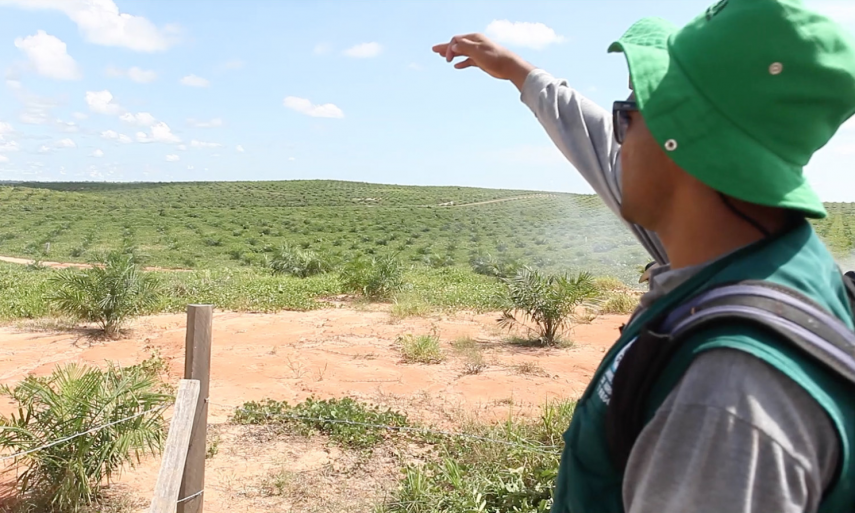 On the 25 September 2019, two leaders of the Shipibo-Konibo indigenous people explained to the magistrates of Peru’s Constitutional Court why the community of Santa Clara de Uchunya were suing the Regional Government of Ucayali and its agricultural agency.

Carlos Hoyos Soria, a prominent leader within the community, said: “The Regional Government issued 222 land certificates to settlers who later sold this land to the oil palm company Plantaciones de Pucallpa which was then transferred to Ocho Sur P who have destroyed thousands of hectares of our forests. We have lost our food security. We live from hunting and fishing but now we can no longer move freely through our territory, and our rivers and streams have been contaminated by chemical fertilizers used in the cultivation of oil palm.”

Miguel Guimaraes, President of the Federation of Native Communities of Ucayali (FECONAU), which represents the community, said: “We trust that the Constitutional Court will prove us right. This day marks another milestone in the historic struggle of this Shipibo-Konibo community for recognition of their rights. It has been going on for seven years and their search for justice has been met with violence. We have even been attacked directly with firearms.”

Both leaders explained afterwards how this represented a historic day for the community because - four years after filing their lawsuit - they were finally able to explain their case to the highest court in the country.

Juan Carlos Ruiz, the community’s lead lawyer from the Institute of Legal Defense (IDL), explained subsequently: “The lawsuit that has been filed focuses primarily on the violation of two rights: first, the ability of indigenous peoples to meet their subsistence needs, and second, their property rights over their ancestral territory. Their ancestral occupation of the land is equivalent to a property title; as a result they are entitled to recognition and restitution of that territory... We have insisted that the Constitutional Court resolves the case according to the rules of the Inter-American Court.”

After the hearing, Álvaro Másquez from IDL added: “We are only here today because... the Constitutional Court admitted the case after it agreed with us that the issues related to indigenous peoples’ land rights are of constitutional significance.”

Másquez explained that the community’s ancestral lands had not been titled by the Regional Government, despite the fact that the government was legally required to do so. This failure, alongside other loopholes, resulted in the community being stripped of its lands, which were then transferred to the palm oil company.

He added: “These lands were transferred to third parties for economic ventures over a period of less than three years, while the titling of an indigenous community often takes 25 years."

In response, the lawyer of the palm oil company Ocho Sur P, Karim Kajatt, said that the company he represents obtained these lands through a formal trust agreement and insisted that there was no link between Plantaciones de Pucallpa and Ocho Sur P. In addition, he argued that the community’s lands are limited to a 218-hectare land title issued in 1986 and that as a result the project is being developed on private lands.

"I request that everything that has been stated to date should be declared null and void, notified and the parties re-summoned for a new hearing," he concluded.

The claim that the two companies were not connected was dismissed by the judges who overruled the company’s request and ordered them to provide a formal response to the substance of the claims.

Dr Conrad Feather, from Forest Peoples Programme (FPP), responded. “The idea that Ocho Sur P has no connection to Plantaciones de Pucallpa is absurd. Ever since this conflict started, those behind these companies have been pursuing classic strategies to evade accountability. First, they create a series of shell companies in Peru linked to parent companies located in secretive offshore tax havens. Then they sought to simply deny and discredit the evidence presented against them. When they realised that a formal complaint to the RSPO’s complaints panel was too strong they simply withdrew from the RSPO and then they create Ocho Sur P in an effort to obstruct and delay legal processes in Peru.”

The court case was elevated to the Constitutional Court after the community had appealed the decisions to reject the admission of the case by the Courts of First and Second instance. These courts argued that the case did not merit resolution through a Constitutional legal process. This position was dismissed by the Constitutional Tribunal in September 2018 in a historic judgement when it admitted the case, setting an important precedent for indigenous peoples in Peru.

Plantaciones de Pucallpa SAC (PdP) withdrew its membership from the Palm Oil industry’s certification body, the Roundtable on Sustainable Palm Oil (RSPO) in October 2016. The decision was taken after it became clear that the RSPO’s complaints panel was about to issue a final decision upholding a complaint about land rights violations and unauthorised deforestation filed in December 2015 by the community of Santa Clara de Uchunya.

In April 2016 the complaints panel ordered a suspension of PdP’s operations after the community complained that the company had destroyed more than 5,000 hectares of their traditional forest lands.

Ocho Sur P appears to be linked to Peruvian Palm Holdings Ltd, a company registered in Bermuda since 2016. The company was incorporated in Bermuda several weeks after Plantaciones de Pucallpa was issued with a stop work order by the Roundtable for Sustainable Palm Oil (RSPO), following a formal complaint lodged by Santa Clara de Uchunya. As investigations have shown, Dennis Melka, one of Peruvian Palm Holdings Ltd’s current directors,  also served as director of parent companies of various shell companies, known locally as the “Melka Group” (these included United Oils Ltd. SEZC and United Cacao Ltd.). Melka gained notoriety in Peru and internationally for the industrial-scale deforestation and rights violations associated with oil palm and cacao plantations in Ucayali and Loreto, including the Ocho Sur P plantation (formerly Plantaciones de Pucallpa) affecting the community of Santa Clara de Uchunya.

Ocho Sur’s operations are currently being investigated by the Specialised Prosecutor for Organised Crime in Lima. On 8 August 2019, following a six-year investigation, a court in Loreto issued prison sentences and a 4.6 million USD fine to the former managers of another Melka Group plantation (Cacao del Peru Norte SAC, now Tamshi SAC)  for illegal deforestation in the Loreto region.

For further information see this report by IDL.