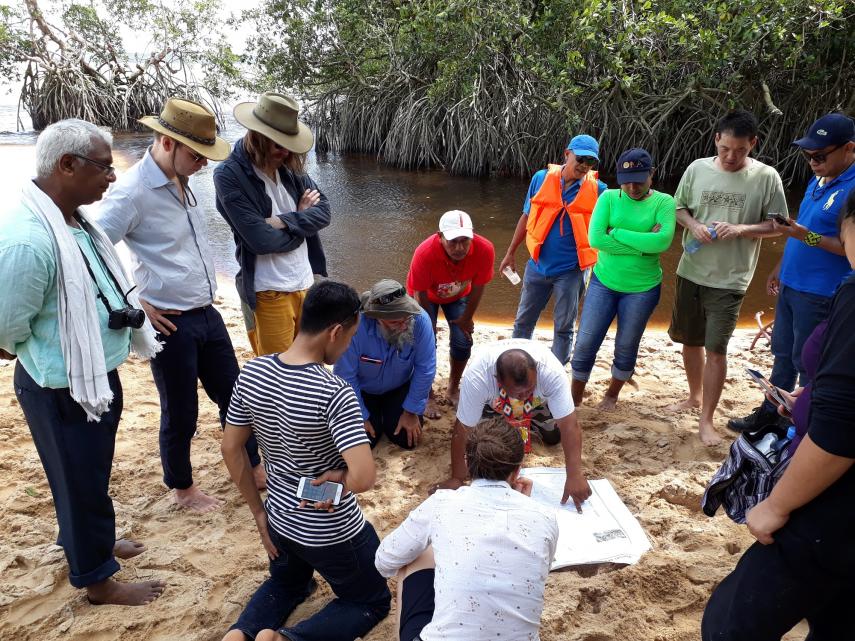 Mark Annandale (kneeling, in blue) and Cathal Doyle (to his immediate left) examine a map made by communities of their territory. They heard about the importance of the creek for their livelihoods and the historical significance of the land.

International experts have visited Suriname as part of a mission to restore ecosystems around a now closed bauxite mining site on indigenous territory.

The delegation visited the Wane Hills site in Marowijne, which was first mined by BHP Biliton and later by Suralco, which is part of Alcoa. The site is now considered mined out and Alcoa has closed operations in Suriname.

The mission, from 25-30 March, was also joined by representatives of the Association of Indigenous Village Leaders in Suriname, VIDS – who have been asked by the Bauxite Institute Suriname to be the counterpart in this mission and assist in the development of an action plan. The closed mine site is located in the self-demarcated customary territory of the Lokono and Kalin’a communities in Marowijne, and the action plan will restore forest and savannah ecosystems so communities can again benefit from this area of their territory.

The area around Wane Kreek has important cultural and spiritual significance as a location of old settlements and burial sites, but is also an important location for hunting, fishing, and collecting materials and medicinal plans.

The delegation was identified and invited by the indigenous village leaders of Lower Marowijne, Suriname, was headed by Mark Annandale (specialist in mining rehabilitation and community forestry, University of Sunshine Coast, Australia) and also included Dr Cathal Doyle, FPIC expert and human rights specialist from Middlesex University of London, UK. They were accompanied by representatives of Suralco.

Mark Annandale (kneeling, in blue) and Cathal Doyle (to his immediate left) examine a map made by communities of their territory. They heard about the importance of the creek for their livelihoods and the historical significance of the land.

Upon their return from the field, the delegation had a meeting with the Minister of Regional Development, Edgar Dikan, to inform him of the activities and progress. They will next draft a Terms of Reference for the restoration of the land.

Annandale and Doyle have visited the area with traditional owners and knowledge holders, using earlier community-based research and documentation on valuable species in the area and community use patterns and practices. Their intention is to advise the communities on accelerated rehabilitation and restoration of the forest and savanna ecosystems. Rehabilitation of the old mine was a specific element of the Kalin’a and Lokono Judgement of the Inter-American Court on Human Rights, which is now in the implementation phase.

Earlier efforts for rehabilitation by the company were received with criticism from the communities, as there was, for instance, insufficient attention on the importance of fruit trees and other original species that attract forest animals. This time the communities have more lead and have accordingly selected their designated experts.

This field visit followed from the Indigenous Peoples Advisory Forum (IPAF) meeting that was hosted in Suriname by VIDS from 20-25 March. This Forum provides advice to the Aluminium Stewardship Initiative (ASI), a network of companies (from bauxite mining to companies producing products using aluminium) that want to become certified according to ASI standards, which include environmental and social responsibilities, including human rights and indigenous peoples’ rights. Environmental and civil society organisations are also members of this network.

Read more about the visit here (in Dutch):