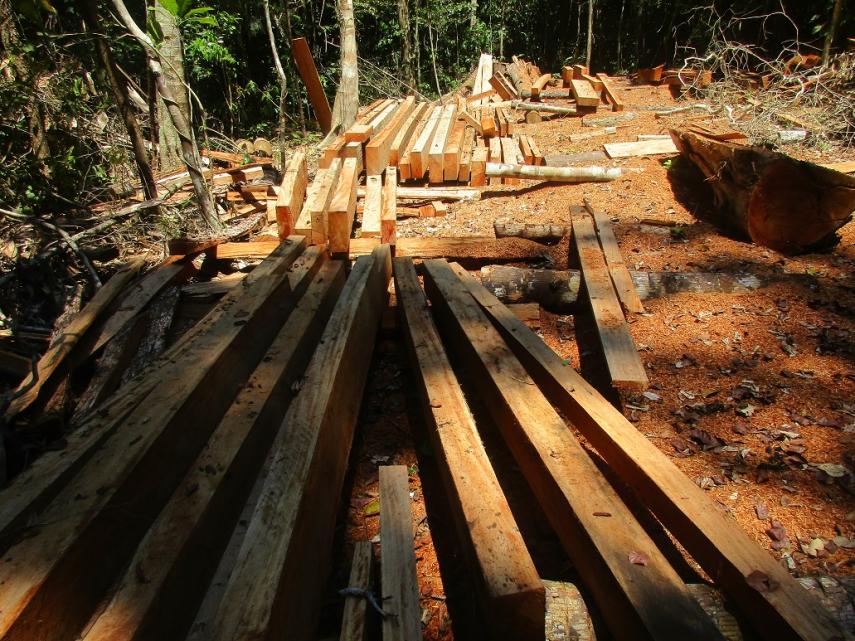 Communities in the Bajo Huallaga area of the Peruvian Amazon declared an “environmental and territorial emergency” on 16 September this year following serious and ongoing impacts on their natural resources, territories and inhabitants caused by land grabs and deforestation of their lands by loggers and palm oil companies.

The decision to declare a state of emergency was taken at an emergency general assembly of the 14 base communities of the Federation of Kichwa Indigenous Peoples of Bajo Huallaga, San Martin (FEPIKBHSAM). The assembly took place in Puerto Mercedes (Papaplaya district of the San Martin province), home to one of the indigenous communities hardest-hit by the clearance and burning of the forest. The community holds the palm oil company, Palmas de Huallaga, responsible for destroying and clearing their forests for oil palm cultivation, and their operations are alleged to have spread into the neighbouring region of Loreto.

It is not only oil palm expansion driving deforestation and violating territorial rights across Bajo Huallaga. In another area of the territory, Santa Rosillo de Yanayaku (Huimbayoc), illegal loggers are harming community forests, causing rights violations and destroying the community’s hopes for sustainable development, while the community of Anak Kurutuyaku report that unknown persons are illegally cultivating coca for drug production within their lands.

Community members have reported these violations to the Specialised Environmental Prosecutor of Alto Amazonas in Yurimaguas on several occasions, yet in the case of Santa Rosillo, the Prosecutor has failed to attend three planned investigations.

Even as community members have spoken out about the territorial threats they face , those opposing these activities are being made to pay a high cost: in September 2018, the apu (chief) of Santa Rosillo, Manuel Inuma Alvarado, was beaten and has received death threats for opposing the illegal loggers clearing forests with impunity in his community’s territory.

"The titling of our territories is key to protecting forests, since it is we indigenous peoples who have been inhabiting and guarding these territories since before the creation of the Peruvian State.”

“These events only reinforce the indigenous movement’s stance on the central importance of collective titling in order to secure indigenous peoples’ territories and continued existence,” said Elias Sinty, president of the Federation, FEPIKBHSAM.

“At the same time, the titling of our territories is key to protecting forests, since it is we indigenous peoples who have been inhabiting and guarding these territories since before the creation of the Peruvian State.”

The regional indigenous organisation, the Council of Indigenous Peoples of San Martin (CODEPISAM), and its members, are currently setting up  a technical working group to resolve violations against its members, focusing on both environmental and territorial issues, especially the need for indigenous lands to be titled and reforms and measures to be put in place to legally recognise their rights over their forests.

The communities which make up FEPIKBHSAM are now calling upon the Peruvian Government to address their situation and follow them in officially declaring their lands to be in a state of environmental and territorial emergency. This would involve a cross-sectoral government agreement to direct resources towards effectively addressing the problems highlighted in Bajo Huallaga through a series of time-limited measures. In particular, FEPIKBHSAM are urgently calling for the communal titling of the entirety of their ancestral territory.

Until now, none of the 14 communities belonging to the federation have been titled in recognition of their property rights over their ancestral territories, despite the Peruvian State’s obligations to do so.

FEPIKBHSAM has indicated that they will continue to highlight how these violations are allowed to take place through flawed policies and inadequate legal protections. This fails to uphold their rights and leaves their territories open to logging, agribusiness, mining, the drugs trade and exclusionary conservation initiatives.  FEPIKBHSAM stresses how the creation of the Cordillera Escalera Regional Conservation Area and the Cordillera Azul National Park, without prior consultation, constitutes a further ongoing violation of their rights as indigenous peoples, including their rights to self-determination and free, prior and informed consent.

As FEPIKBHSAM await a response through the newly-formed working group to the territorial demands of their base communities, they hope that the government will take this opportunity to create policies which respect indigenous peoples’ rights and territories, and thus bring an end to the declared state of environmental emergency faced by the communities