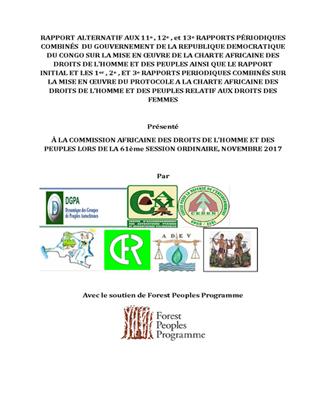 In accordance with Article 62 of the African Charter on Human and Peoples' Rights, States Parties to the Charter are required to submit every two years, a report on the legislative or other measures taken, with a view to giving effect to the rights and freedoms recognised and guaranteed by the Charter.

The DRC report was reviewed during the 61st Ordinary Session held in Banjul, The Gambia, from 1 to 15 November 2017. Forest Peoples Programme (FPP) in collaboration with seven civil society organizations including indigenous peoples' organizations working in the DRC has prepared an alternative report to complement the information provided by the Government in its report.

Click on the link below to read the report (French only)