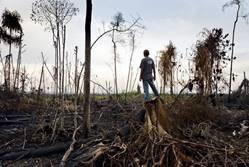 Indigenous peoples, civil society organisations, researchers and UN agencies alike are sending a clear message to governments that to stem the environmental and ecological crises facing the world, they must focus on protecting human rights.

This assertion is made as the second round of negotiations on the post-2020 framework of the UN Convention on Biological Diversity (CBD) opens in Rome on 24 February. Pressure is growing on Parties to the Convention to ramp up efforts to stem the tide of the sixth mass extinction.

Activists and community leaders are being targeted, harassed and even killed for defending nature and their communities’ territories against industrial threats such as mining, monoculture plantations and mega-infrastructure.[i] Well-known international NGOs are under fire for alleged human rights violations in the name of conservation.[ii] On the other hand, major reports show that supporting indigenous peoples and communities to secure rights, governance and stewardship of their collective lands and territories is one of the most effective means of ensuring nature conservation.[iii] Public and political awareness about the interlinkages between human rights and the global biodiversity crisis are rising.

The 196 government Parties to the UN Convention on Biological Diversity (CBD) are negotiating an international instrument to succeed the current 2011-2020 Strategic Plan for Biodiversity. The clock is ticking as Parties are expected to adopt this post-2020 global biodiversity framework in October 2020, with only a few more meetings before then to negotiate the text.

The early draft of this framework – known in UN parlance as a ‘zero draft’[iv] – is being scrutinised at the second round of negotiations beginning in Rome, Italy, on 24 February 2020. Initial reactions from civil society and human rights advocates indicate that the zero draft lacks the necessary ambition and commitments to usher in an era of transformative change.

“The scientific consensus is clear: direct and indirect drivers of change in nature have accelerated in the last 50 years and we will only achieve goals for 2030 and beyond through transformative changes in economic, social, political and technological systems. This draft fails to deliver transformative change,” said the report of an international workshop on human rights in the post-2020 framework, held from 18-20 February 2020 in Chiang Mai, Thailand.

The workshop underscored that human rights are an essential condition for a successful post-2020 global biodiversity framework. It identified insufficient recognition of human rights as a major gap in the zero draft. “For all people to enjoy a safe, clean healthy and sustainable environment, we have to respect, protect and fulfil human rights. To realise our human rights, we must heal, protect and sustainably live on our planet.”[v]

The workshop also found that the zero draft does not sufficiently recognise the rights and roles of indigenous peoples and communities. “Indigenous peoples are crucial partners in achieving the 2050 vision of living in harmony with nature,” said Lakpa Nuri Sherpa, Environment Programme Coordinator of Asia Indigenous Peoples Pact. “This vision cannot succeed without our full and effective participation and recognition of our customary land rights and governance systems.” The workshop called for a new target specifically on securing indigenous peoples’ and communities’ rights to their collective territories, lands and waters, in accordance with their customary laws, governance systems and management practices.

Other key messages, gaps and opportunities to strengthen human rights in the zero draft include the following:

Legal experts argue that “the time has come” to integrate and recognise human rights in multilateral environmental agreements such as the CBD – not only as a matter of justice but also as a matter of efficacy. Most countries recognise the right to a healthy environment in their constitutions, and governments, judges and activists alike are bringing human rights to bear on environmental issues. As the first UN Special Rapporteur on the right to a safe, clean, healthy and sustainable environment, Professor John Knox, noted in his final report in 2018, “The interdependence of human rights and the environment is an idea whose time is here.”[vi]

“A rights-based approach to conserving biodiversity can be a catalyst for the transformative changes needed to address the global environmental crisis,” says Dr. David Boyd, current UN Special Rapporteur on human rights and the environment. “History proves that human rights can trigger sweeping societal changes such as the end of slavery, the equality of women, the end of apartheid and the increasingly influential Indigenous rights movement.”

1. The Convention on Biological Diversity (CBD): Opened for signature at the Earth Summit in Rio de Janeiro in 1992, and entering into force in December 1993, the Convention on Biological Diversity is an international treaty for the conservation of biodiversity, the sustainable use of the components of biodiversity and the equitable sharing of the benefits derived from the use of genetic resources. With 196 Parties so far, the Convention has near universal participation among countries. The Convention seeks to address all threats to biodiversity and ecosystem services, including threats from climate change, through scientific assessments, the development of tools, incentives and processes, the transfer of technologies and good practices and the full and active involvement of relevant rights-holders and stakeholders, including indigenous peoples and local communities, youth, NGOs and women.

2. The thematic workshop on “human rights as an enabling condition in the post-2020 global biodiversity framework” was held from 18-20 February 2020 in Chiang Mai, Thailand. The purpose of this workshop was to identify how a human rights-based approach can best be included in the post-2020 global biodiversity framework for ensuring conservation, sustainable use, and fair and equitable sharing of the benefits of the world’s biodiversity, leading towards the 2050 vision of living in harmony with nature. The workshop was co-convened by Asia Indigenous Peoples Pact (AIPP), Forest Peoples Programme (FPP), Deutsche Gesellschaft für Internationale Zusammenarbeit (GIZ) GmbH on behalf of the German Federal Ministry for Economic Cooperation and Development (BMZ), International Development and Law Organization (IDLO), Natural Justice, UN Environment and SwedBio at Stockholm Resilience Centre. A total of 42 participants, including Parties, intergovernmental organisations, civil society organisations, indigenous peoples and local communities, youth, women, academia and UN agencies, took part in the workshop. The workshop report and related documents are available here.