Constructive dialogue and potential synergies between the National Human Rights Commissions and Institutions of Indonesia, Malaysia, Thailand, the Philippines and Cambodia, reached an important milestone at a four-day workshop in November in Bali, Indonesia. The workshop was convened by the Indonesian National Human Rights Commission and organised by Forest Peoples Programme and Indonesian NGO SawitWatch, with the support of the Rights and Resources Initiative, Samdhana Institute and RECOFTC – The Center for People and Forests.

This landmark workshop on “Human Rights and Business: Plural Legal Approaches to Conflict Resolution, Institutional Strengthening and Legal Reform” was attended by 60 participants, including notable academics, indigenous peoples’ representatives and members of supportive national and international NGOs. An opening statement was made by UN Special Rapporteur on the Right to Food, Olivier de Schutter, and a presentation was delivered by Raja Devasish Roy, elected Member of the UN Permanent Forum on Indigenous Issues (UNFPII) and traditional chief of the Chakma circle in the Chittagong Hill Tracts, Bangladesh.

The workshop focused on the challenges faced in ensuring respect for the rights of indigenous peoples and rural communities in the context of the rapid expansion of agribusiness, notably the palm oil sector, as well as the need to recognise their right to development and improve their welfare. The rich and diverse sharing of lessons learned, experiences and recommendations that characterised the workshop was instrumental in fostering stronger mutual understanding between the Human Rights Commissioners, regional lawyers, human rights activists and supportive NGOs.

In an attempt to span and connect the local, national, regional and/or international levels involved in and affected by agribusiness expansion, the workshop participants actively identified opportunities for using plural legal approaches to secure the rights, especially in land, of indigenous peoples and other customary law communities. The need for a Rights-Based Approach to Agricultural Expansion across the South East Asian region was strongly voiced, an approach that needs to be based on human rights norms, guided by human rights principles and standards, and geared towards the realisation of human rights for all.

Seminal to the discussions was the report “Protect, Respect and Remedy: a Framework for Business and Human Rights” (2008) on the human rights responsibilities of corporations, by Professor John Ruggie, UN Secretary-General’s Special Representative on Business and Human Rights. This report, otherwise known as the UN Framework on Business and Human Rights, was identified as a basis and possible critical tool for dialogue. Of particular relevance to the theme of the workshop was the fact that “the responsibility [of corporations] to respect human rights is a global standard of expected conduct for all business enterprises wherever they operate. It exists independently of States’ abilities and/or willingness to fulfil their own human rights obligations, and does not diminish those obligations. And it exists over and above compliance with national laws and regulations protecting human rights.”

Concluding comments by Marcus Colchester (Forest Peoples Programme) and Nur Kholis (Komnas HAM) stressed the need for both immediate effectiveness and long-term objectives in securing the rights of indigenous peoples and local communities in the face of agribusiness expansion on their customary lands. Also highlighted was the pivotal role that National Human Rights Institutions can play in raising their concerns about agribusiness and human rights to international financing institutions (such as the Equator Banks), UN Working Groups, UN Human Rights treaty bodies and UN Special Rapporteurs, as well as ASEAN. In addition, there was a general agreement among the participants that plural notions of “development” needed to match the plural legal systems and processes at work at different levels; local, national, regional, and international. The fundamental requirement needed for reaching these objectives was identified as sustained and pro-active collaboration between the Human Rights Commissions, with the support of NGOs and indigenous organisations.

A significant outcome of the workshop was the development of a regional human rights standard for agricultural expansion in South East Asia, anchored in international human rights standards and the ICC Edinburgh Declaration. This new standard, the “Bali Declaration on Human Rights and Agribusiness in South East Asia”, reminds companies of their legal obligation to fulfil their responsibilities to respect human rights, even where human rights are not fully respected by States in which they operate and where the legislative framework is weak and loosely enforced. The Declaration also calls on States to fulfil their legal obligations to protect the rights of their citizens, including indigenous peoples, in the face of unprecedented pressure by agribusinesses: Notably their rights to own and control the lands and territories they have traditionally owned, occupied or otherwise used and their right to give or withhold their Free, Prior and Informed Consent to activities planned on those lands. The Declaration also makes particular reference to the rights of workers, smallholders, communities, women and children under international human rights law.

It is expected that this Declaration will encourage governments and legislatures in the South East Asian region to take urgent steps to reform national laws and policies relating to land tenure, agrarian reform, land use planning and land acquisition so that they comply fully with their countries’ human rights obligations, including the right to food, the right of all peoples to freely dispose of their natural wealth and resources, and the right not to be deprived of their means of subsistence.

The proceedings of the Bali workshop will be published during the course of 2012 and a follow-up workshop is being organised, which will this time also benefit from the participation of representatives of the agribusiness and private sectors, to stimulate broader lesson-sharing and multi-stakeholder dialogue.

The workshop was the outcome of close collaboration between the Indonesian National Human Rights Commission, FPP and Sawit Watch
By
Sophie Chao 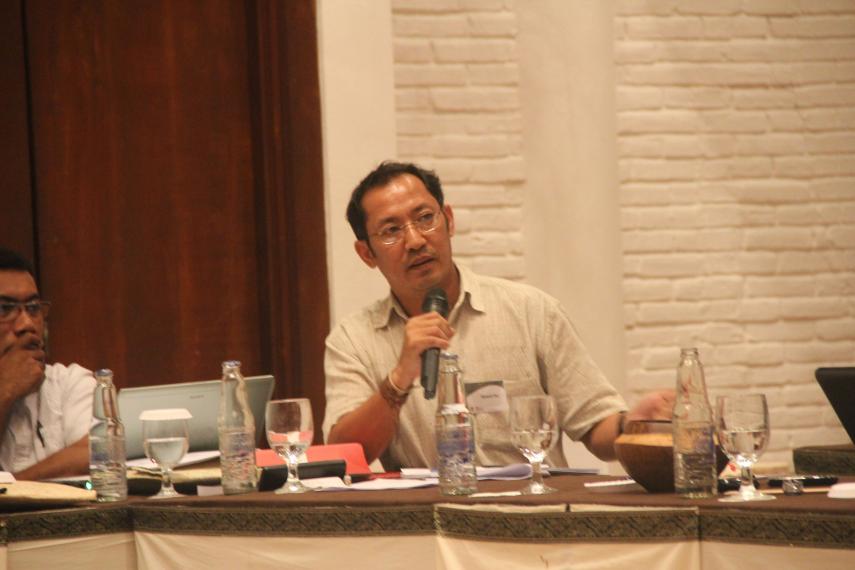