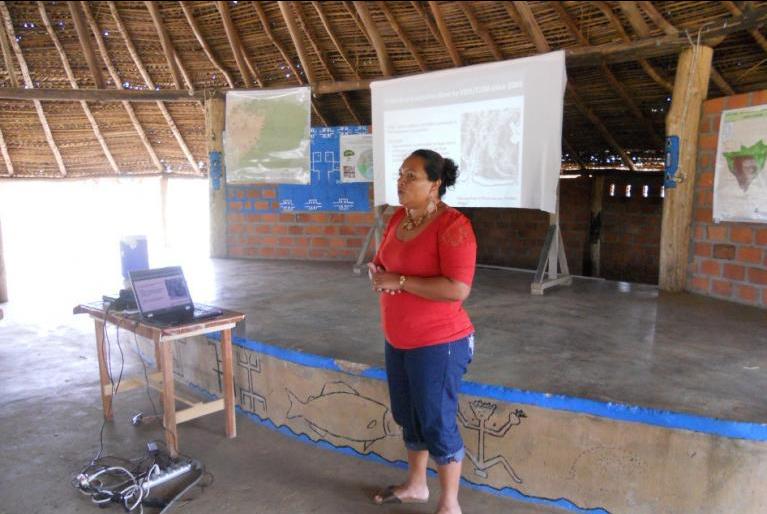 In March 2013 a delegation of six members of the Organisation of Kalin’a and Lokono peoples in Marowijne (KLIM) from Suriname travelled to the South Central and Deep South regions of Guyana to visit the Wapichan and Makushi people (united in SCPDA, the South Central Peoples Development Association) to exchange experiences and approaches related to community resource mapping and territorial management planning. The exchange visit between the Forest Peoples Programme partners demonstrated the great value and benefits of community-to-community learning. This was a long-standing wish of KLIM and SCPDA and was made possible through a grant from Siemenpuu Foundation.

In February 2012, SCPDA launched a ground-breaking digital map of the Wapichan traditional territory in Guyana and an outline plan detailing how to care for it. The plan and map are part of the Wapichan’s long standing campaign to have their rights to their traditional lands legally recognised in order to protect their natural resources from external threats such as logging, mining and agribusiness development. During a two-day workshop in the benap (the traditional meeting hall in the village of Shorinab), members of the SCPDA team explained to their “brothers and sisters from Suriname” how they produced the management plan, and shared their experiences and lessons learned in developing the plan, including challenges in various phases of development and in the first steps of implementation.

KLIM informed SCPDA about the Surinamese context.  For instance they explained that indigenous peoples in Suriname do not have any recognised titles to their traditional lands as Surinamese law does not yet accommodate collective land rights, and that outsiders have acquired individual land titles in the indigenous area. Thus, in 2007, KLIM filed a case with the Inter-American Commission on Human Rights to seek their assistance in claiming their land rights. They also presented the work KLIM has been focusing on, which includes community mapping, historical/archival research, community-based research on customary practices in Marowijne, projects to strengthen the traditional authorities and develop model village constitutions, capacity building for village councils, and research on climate change impacts in the territory. The teams shared lessons learned and discussed the pros and cons of certain approaches and methodologies and sequences of work.

Both organisations shared some of their planned next steps, seeking each other’s opinions and feedback. Future activities include continued dialogue with their governments, community conservation projects, training for village councils on leadership skills, community-based environmental monitoring, and biodiversity surveys and inventories.

After the workshop, the exchange visit continued with several field visits and trips in the Wapichan territory, during which the SCPDA team showed KLIM a variety of important sites and activities in the territory and in the villages, such as important proposed community conservation sites, cultural sites, educational activities, and local income generation projects. The KLIM team also had the opportunity to meet with several key community leaders in their own villages. During these visits the communities took time to discuss similarities between what the two local organisations are doing and exchanged lessons and ideas.

Some key observations and reflections from the exchange visit were that both communities are facing serious challenges relating to lack of legal recognition of land rights, and are having to deal with long processes that require patience and perseverance. Their maps and the management plan are closely interlinked and have to be continuously updated; it is important to have in-house skills to do this as there are many technical aspects involved. Both partners stressed that strong leaders with long-term vision and commitment to the work are crucial, and leaders with hidden agendas and other interests can damage collective aspirations, so strong traditional authorities are very important. One thing that KLIM learned from SCPDA’s approach is that even within a collective territory it is important to have agreement on the boundaries of each village area and agreeing mutually and internally on who is responsible for which areas.

The friendships and close solidarity established between the neighbouring indigenous peoples was a heartwarming element of the exchange visit and it was agreed that SCPDA and KLIM will continue to support and empower each other in the future. In terms of doing intensive assessments/surveys of species, SCPDA already has more experience with this and they have received training and help from prominent international organisations. These Wapichan/Makushi specialists have offered to visit and share their expertise with KLIM in due time as a further step in consolidating inter-community solidarity.

Towards the end of the trip, Nicholas Fredericks, coordinator of SCPDA, expressed the  honour and pleasure for SCPDA to have KLIM visit their territory and how interesting it was to hear about KLIM’s activities and approaches. He hoped that SCPDA  could help and have an impact on KLIM’s work. Both KLIM and SCPDA stressed that this link between Lower Marowijne and Rupununi peoples will be continued and strengthened , and experiences continually shared.  KLIM extensively thanked SCPDA and the people of Shorinab for their warm welcome and hospitality, extending an invitation to them to visit Lower Marowijne at any time. KLIM coordinator George Awankaroe said that it was a very demanding trip with a full schedule, but extremely valuable, exciting and inspiring, and laid the foundations for friendship and closer collaboration. It is hoped that close collaboration between indigenous peoples internationally will help to achieve the best possible outcomes for communities and the environment. 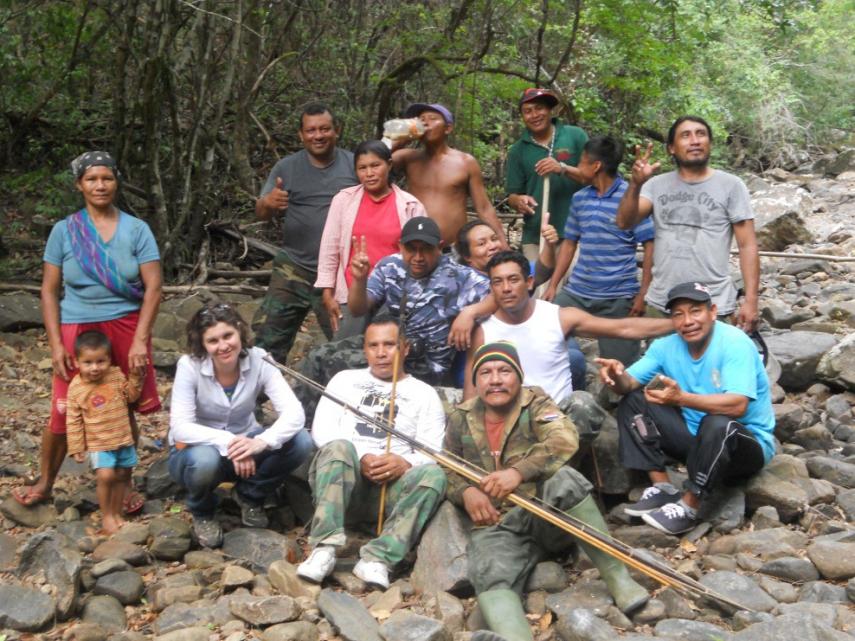