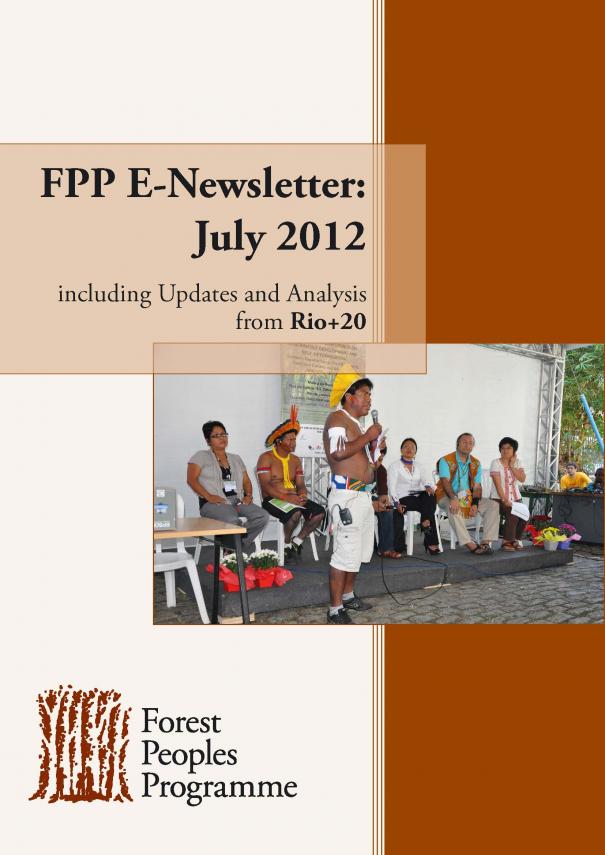 Including Updates and Analysis from Rio+20

We live in a deeply divided world where growing inequalities, rising populations, coupled with heightened expectations and life-style demands, run into conflict with finite and depleting resources. Twenty years ago, at the first Rio Summit, it was agreed that a transition to ‘sustainable development’ was urgently required. Reviewing the results of the second Rio Summit (‘Rio+20’) held last month, most commentators agree that governments have not made the promised changes. In some respects the world has gone backwards, the message of ‘sustainable development’ having been replaced with a renewed obsession with ‘sustained growth’.

From the point of view of Forest Peoples Programme the most disappointing aspect of ‘Rio+20’ is that while the summit’s final communiqué does mention the importance of human rights it does nothing to change the way development decisions get made. Whereas a key message of the Brundtland Report of 1996 was that ‘local communities and indigenous peoples should have a decisive voice about resource use in their areas’, the emphasis of Rio+20 was for a ‘Green Economy’ dominated by commercial interests and the language of the market. This is especially disappointing in the light of an important preparatory statement from the African Commission on Human and Peoples Rights which had stressed that respect for the rights of indigenous peoples and women is needed for development to be made sustainable. Our upcoming toolkit on the rights of indigenous women in the Inter-American Human Rights system argues in the same direction.

Staff and partners reporting back from their experiences in Rio echo these conclusions. The final communiqué does not mention ‘free, prior and informed consent’(FPIC) and there was little emphasis on the rights of women, while participation in the whole process was weak. By contrast indigenous peoples’ own meetings had been vigorous and inclusive and highlighted an alternative vision of self-determined development that recognises the importance of integrating culture, wider social values and rights-based approaches in environment and development policies. Given that, as a new FPP study shows, the livelihoods of some 1.3 billion people depend on forests for their daily needs, the weak treatment of forests in the summit is especially worrying.

The gap between the rhetoric of the ‘Green Economy’ and the reality on the ground is most stark in the respect of what is happening in the Amazon basin. In the host country, Brazil, new laws and policies threaten to undermine indigenous peoples’ rights and expose them to land grabs and mining. Meanwhile, in neighbouring Peru, the government’s compulsion to boost its unsustainable extractive, petroleum-based economy has led it to flout its own laws protecting isolated peoples in specially set aside reserves, even though it is well known that such peoples are vulnerable to near extermination from introduced diseases.

Yet, the glass is not just half empty. Important gains are being made from more inclusive models of decision-making. At a multi-stakeholder dialogue organised by The Forests Dialogue, the Ministry of the Environment committed the Democratic Republic of Congo to respect FPIC in its programme on climate and forests, a commitment that contrasts with CSOs’ experience with the country’s current REDD process, in which poor participation has prompted a walk out. Let’s hope, too, that the UK Government’s express commitment to open consultations to chart the way forwards for its new £2.9 billion UK International Climate Fund will really open ways for forest peoples to retake control of their forests.

Looking ahead, one urgent corrective is for international financial institutions to make themselves properly accountable to those most affected by their investments. The new President of the World Bank must heed the appeal of 98 indigenous peoples’ organisations to effectively respect and secure their rights in soon-to-be-revised World Bank policies.