Securing Forests, Securing rights: Report of the International Workshop on Deforestation and the Rights of Forest Peoples 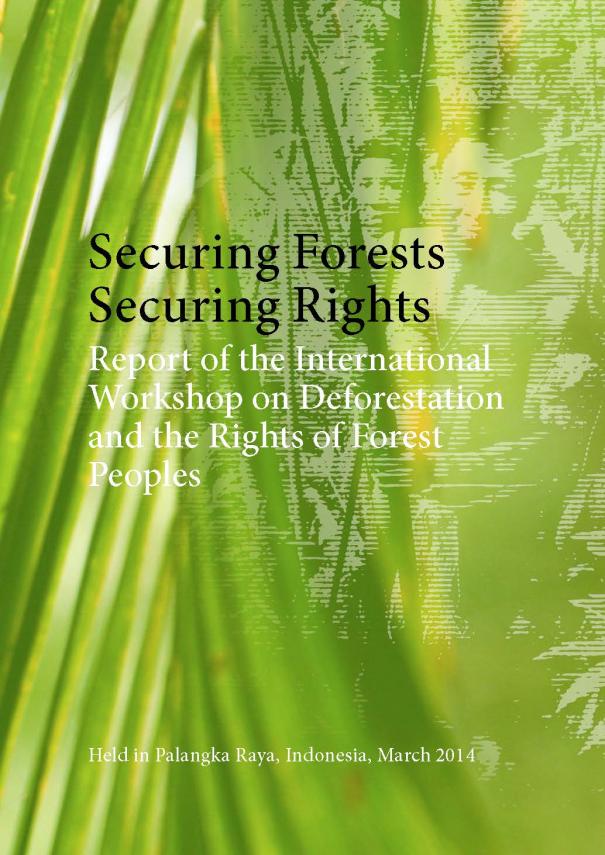 The global forest crisis is worsening and infringements of the rights of indigenous peoples and forest-dependent communities are rising, according to a detailed assessment of nine country cases. Climate change mitigation and conservation policies must place community land rights and human rights centre-stage if they are to achieve the goal of sustainably reducing deforestation says the report.

The report provides alarming evidence of serious rights violations associated with deforestation, and first-hand community testimony of the impact of environmental destruction on the wellbeing and cultural survival of forest-dependent communities. It highlights recommendations from indigenous peoples to support community-led initiatives to address deforestation in their own territories.

‘Securing Forests, Securing Rights’ was compiled following research and investigations conducted by more than sixty indigenous and forest communities from Africa, Asia and Latin America. Convening in Central Kalimantan, Indonesia, in March 2014, rights holders themselves spoke independently of the direct and indirect drivers of forest loss and shared their own assessments of the grave human rights violations and atrocities facing their communities and lands today.

The resulting global call to action – The Palangka Raya Declaration on the Rights of Indigenous Peoples – demands that governments, international agencies and the international community halt the production, trade and consumption of commodities derived from deforestation; stop the invasion of forest peoples’ lands and forests by logging and timber extraction, agribusiness, extractive industries, energy and conservation projects that deny fundamental human rights; and take immediate and concrete actions to uphold forest peoples’ rights at all levels (including the right to land, territories and the right to self-determined development).

‘We urgently need to overcome the contradiction between government initiatives that seek to exploit the forest and take land from communities, and conservation initiatives like REDD schemes. Both are seeking land and forest but continuously exclude local communities.’ – Norhadi Karben, Mantangai, Kapuas, Central Kalimantan

The report evidences alarming infringements of the rights of forest communities in nine countries (Indonesia, Malaysia, Cameroon, Democratic Republic of Congo, Liberia, Colombia, Guyana, Paraguay, and Peru). In all nine countries, industrial forest concession and land-leasing models were identified as responsible for systemic rights violations and forest destruction. The effectiveness of ‘zero deforestation’ pledges made by governments and business were also critiqued by authors who identified a huge gap between policies on biodiversity and forest conservation, on the one hand, and prevailing unsustainable development models and practices, on the other.

Insecure community tenure rights, perpetuated by discriminatory and out-dated land and forestry laws, are identified as key ‘indirect’ drivers of deforestation. In addition, the unsustainable and growing global demand and consumption of ‘forest risk’ commodities including meat, livestock feed (soya), palm oil, minerals, oil, gas and biofuels are highlighted as the main indirect drivers of forest loss and human rights infringements across all nine countries covered by the report.

Forests and their role in mitigation have been at the centre of climate change negotiations for many years, in particular in negotiations on REDD+ (Reduced Emissions from Deforestation and Degradation). The Cancun agreements, finalised in COP16 in 2010, acknowledge the importance of forests in mitigating climate change, the role of indigenous peoples in conserving and managing forests, and adopted safeguards for REDD+ to ensure respect of indigenous peoples' rights and traditional knowledge. This was a significant step forward in building the foundations of a rights-based approach in multilateral environmental agreements such as the UNFCCC.

Since then deforestation has increased. Human rights violations, land grabs and the seizure of indigenous land have intensified, driven by the expansion of infrastructure, monoculture plantations for food, fuel and fibre, logging, and carbon mitigation actions such as biofuels, natural gas or large-scale hydropower development.

At the same time the effects of climate change on indigenous peoples have also intensified in terms of restricted access to water, food, drought, alteration of ecosystem balances and loss of knowledge systems and cultures. The gains achieved in Cancun risk being lost unless parties take a bold stance and acknowledge that climate change is a human-rights issue.

Thus far, discussions and negotiations on land-based mitigation - including forests - have only paid lip service to the need to ensure respect for the rights of indigenous peoples and forest-dependent peoples and communities.

Human rights must be at the centre of deliberations beyond Lima and robust rights-based approaches must be enshrined in future agreements adopted in Paris 2015. Forest peoples everywhere are calling for a more inclusive public debate and a greater emphasis on the fact that where forest peoples’ rights are secure and respected, forests are also secured for future generations, and remain healthy and intact – a view supported by a growing body of scientific and empirical evidence.

Without securing forest peoples’ land and territorial rights in line with the United Nations Declaration on the Rights of Indigenous Peoples (UNDRIP) and in accordance with State obligations under related human rights instruments, it is unlikely there will be any halt to the accelerating destruction of forests globally.

‘Governments and companies must recognise, respect and restitute the rights of communities. Governments must also terminate and suspend permits allocated to unjust development projects that violate communities' rights and damage and destroy the forest. Only by guaranteeing and protecting rights and recognising the communities that manage forests can deforestation truly be curbed and the well-being of forest peoples be secured.’ Franky Samperante, PUSAKA.