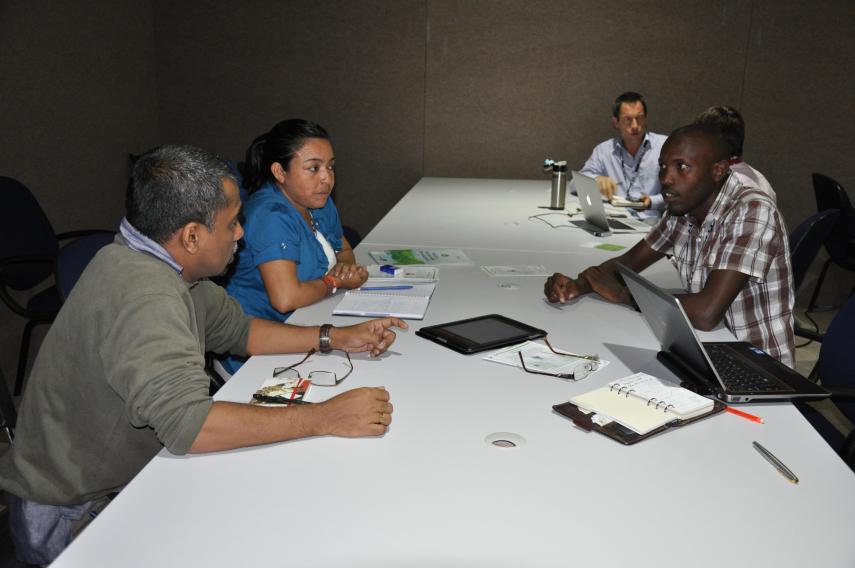 Forest Peoples Programme and a delegation of indigenous peoples’ leaders from Guyana, Suriname, Peru, Panama and Kenya attended the Rio+20 Indigenous Peoples’ International Conference on Self-Sustainable Development and Self-Determination from 17-19 June and the formal Rio+20 intergovernmental meeting from 20-22 June 2012. Delegates also took part in the Kari-Oca II meeting and the Peoples’ Summit and were involved in the Global Day of Action on 20 June.

After a hectic week of press conferences, public presentations, marches and attendance at official meetings and side events, FPP asked delegates to comment on the Rio+20 experience and related issues. Some excerpts from these interviews are presented below.

“It seems that the States and many big conservation NGOs and big companies at Rio+20 are only talking about what they call ‘natural capital’ and money. They always talk about money and now they want to call their activities the ‘green economy’. Yet the truth is that their focus is still on extracting natural resources. That is what we see in the Low Carbon Development Strategy (LCDS) in Guyana, which here at Rio has been put up as a model for other developing countries to follow. I want to say that unless our territories are fully secured and respected, the Guyana LCDS process cannot be a model because it does not adopt a human rights and ecosystem approach. We have pushed for our rights, but every time we ask the government to address the land issue we hit a brick wall. They just refuse to acknowledge our issues.”  [Laura George, Amerindian Peoples’ Association (APA), Guyana]

“I felt the official Rio+ 20 process was not open enough. The memory of the official Forests Dialogue will stay with me for a long time. It was just people online or in the room that could put forward recommendations and vote. I think that is unfair. We don’t have internet in most of our villages. So I feel we were not really involved. The language on forests in the government’s Rio+20 document is really weak. I am really disappointed with that. What I enjoyed most this week was the peoples’ March on the Day of Action: I think the social movements sent a strong message to governments that their official process is not addressing the needs of the planet nor our peoples”. [Kokoi, Amerindian Peoples’ Association (APA), Guyana]

“The conferences organised by indigenous peoples were useful and we have developed powerful messages here in different statements. On the other hand, while we did get some useful language on biodiversity and traditional knowledge in the official outcomes, overall the language was not solid. It does not go deep enough on our fundamental rights because the official process for participation at Rio+20 did not allow for our effective participation. That is why many of the outcomes are superficial, while back at home our governments have not fully respected our peoples and they continue pushing extractive industries and megaprojects, and they are borrowing money to do this. The Panamanian state says that it is seeking to eradicate poverty, but the reality in our territories is quite different: our lands are being invaded by colonists and dams and mine developments are violating our rights. Governments, development agencies and finance institutions must adopt another strategy based on genuine respect for our rights otherwise in another twenty years we see more environmental damage, further fragmentation of ecosystems and greater poverty”. [Onel Masardule, Foundation for the Promotion of Indigenous Knowledge (FPCI), Panama]

“Before going to Rio the message was already clear; ‘do not expect too much regarding the outcomes’. Participating in the Climate Change conferences for several years now, I was prepared. But still I am disappointed about the results worded in the outcome document ‘The Future We Want’. Somehow I expected that the UN conference on sustainable development to be at least an open and transparent process. Maybe I was being naive as the UN structure still does not seem capable of ensuring a participative process to get the right results for the sustainable development that we all hope for our future? That worries me. But there are some bright points, even in the outcome document, which can be used by indigenous peoples, especially in countries like Suriname where the rights of indigenous peoples are not legally recognised. I like paragraph 49 which stresses the importance of the participation of indigenous peoples and others in the achievement of sustainable development and says that governments “recognize the importance of the UN Declaration on the Rights of Indigenous Peoples in the global, regional and national implementation of sustainable development strategies”. These outcomes are worthwhile. Outside the official summit, I really enjoyed the discussions during the workshop of the Indigenous Peoples Global Conference on Sustainable Development and Self Determination. Based on that, I have the feeling we are on a good track regarding our own development proposals, particularly relating to local economies and traditional knowledge. I gained a lot of information and some new ideas out of the exchanges”. [Marie-Josee Artist, Association of Indigenous Village Leaders in Suriname (VIDS), Suriname]

“It has been an interesting experience for me. I have met and linked up with many brothers and sisters of the indigenous peoples’ movement. That makes me feel good. I feel stronger. I feel it is not only my Ogiek people in Kenya suffering from the unsustainable policies pushed by governments and transnationals. Many of us are facing the same injustices of land grabbing, displacement and marginalisation the world over, including indigenous peoples in countries like Canada and the US. We are all suffering from the same destructive development model so we have a common cause. And we are united in speaking out. I will go home to tell my people that we are not alone in our struggle”. [Peter Kitelo, Chepkitale Indigenous Peoples’ Development Project (CIPDP), Kenya]