World Bank still backing unsustainable development: will it ever learn? Book review: Bruce Rich, 'Foreclosing the Future? The World Bank and the Politics of Environmental Destruction' 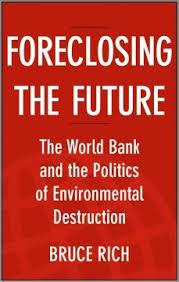 A powerful new book by environmental campaigner Bruce Rich, titled “Foreclosing the Future”, pulls together a mountain of evidence to document how World Bank projects and development finance over the last two decades have continued to cause major local and global environmental damage and inflict harm on communities in borrower countries. Problems with large scale corruption in Bank lending and procurement are also exposed in the book, which charts the evolution of the Bank’s environmental and social policies and assesses the effectiveness of internal Bank reforms intended to “mainstream” environmental and social issues, tackle corruption and reduce poverty.

Drawing on Bank studies, project evaluations and sectoral reviews, it is shown that the World Bank still suffers from a pervasive “loan approval culture” driven by a perverse incentive system that pressures staff and managers to make large loans to governments and corporations without adequate attention to environmental, governance and social issues. In 2013, Bank Staff who highlight social risks and seek to slow down project processing still risk “career suicide”.

Detailed accounts of controversial Bank projects, including the Yacyretá dam (Paraguay and Argentina), Chad-Cameroon Pipeline Project, Bujagali Dam (Uganda), Nam Theun II dam (Laos) Yanacocha and Marlin gold mines (Peru and Guatemala) and forestry projects in the Democratic Republic of Congo and Cambodia, among others, all demonstrate poor implementation of the World Bank’s and International Finance Corporation (IFC)’s social and environmental safeguards that are meant to protect the environment and vulnerable groups.

Persistent and systemic problems include underestimation of risks, faulty social and environmental impacts assessments, weak integration of environmental and social issues and a lack of monitoring and supervision.  Another core problem is insufficient attention to borrower corruption and weak governance structures, which in cases like the Chad-Cameroon pipeline have led to misappropriation of Bank funds, social conflict and human rights abuses. Even if good environmental and social work is completed, this analysis too often has limited influence on the final project design, which is still usually stacked in favour of powerful government departments and big business.

Efforts by different Bank presidents to promote change, including James Wolfensohn’s far reaching decentralisation reforms in the 1990s, are found to have weakened environmental mainstreaming. Later reforms re-locating environmental staff within infrastructure and energy departments have also resulted in less internal coordination across sectors and further marginalised social and environmental specialists whose advice is increasingly ignored.

The Bank’s “institutional amnesia”, “culture of arrogance” and inability to learn from past mistakes are also pinpointed as key obstacles to achieving sustainable outcomes for the environment and the poor. The whole book highlights how the need to address the root causes of weak environmental and social performance, including actions to eliminate perverse incentives, has been put to senior managers and the Bank’s governing body ever since the Bank’s Wapenhans report in 1992. The need to prioritise governance and respect human rights have likewise been communicated time and again through the Inspection Panel investigation reports on problem projects and through sectoral reviews sponsored by the Bank, including the World Commission on Dams (WCD) and Extractive Industries Review (EIR). Yet the Bank has consistently chosen to reject or disregard the findings of most of these studies.

Rather than heed civil society calls for the need to channel finance to alternative economic models focused on poverty reduction, empowerment of communities and sustainability, the Bank has chosen to back “high risk/high reward” mega dam, energy and infrastructure projects and is taking measures to speed up lending to please its borrower country ‘clients’. It is also directing ever larger loan volumes to subsidise large transnational mining, energy and industrial companies through the IFC in the name of ‘poverty reduction’, when internal Independent Evaluation Group (IEG) reviews question the poverty benefits of these IFC investments.

In short, instead of learning from experience of decades of development work, senior Bank staff and government ‘clients’ have pushed back against safeguards, which they incorrectly claim are costly and block development benefits for the ‘poor’, when all the aforementioned evidence points to the exact opposite. At the same time, the Bank is channelling more and more financing through non-project lending, including through financial intermediaries, development policy loans (DPLs) and direct budget support initiatives like the “Programme for Results” that are only subject to limited environmental, social controls and superficial risk assessments.

This failure to develop a robust safeguard framework to regulate DPLs and other programmatic lending is as a fatal policy gap and a key reason why the Bank has not delivered on its promise to promote sustainable development in the last 20 years.

Fundamental disconnects in World Bank policies and sectoral strategies are identified as another core obstacle to sustainability. One glaring example is Bank policies and finance for the forest sector. In the 1990s the Bank sought to protect rainforests and promote community forestry, yet at the same time its much larger structural adjustment loans to borrower governments have bolstered key international and macroeconomic drivers of forest loss in tropical countries, including support for currency devaluations, trade liberalisation and export-led agricultural expansion.

Deep contradictions in World Bank energy and climate policies are also laid bare as a fundamental cause of environmental damage. As the World Bank has become a “trustee” of the world’s global climate funds, including forest and climate programmes, it has continued to binge on enormous loans to oil and gas extraction, coal-fired power stations and large-scale mining generating environmental damage, forest loss and massive carbon emissions.

The Bank’s promotion of a flawed carbon offset market plagued by fake carbon offsets, faulty carbon accounting and false claims of “additionality” is denounced as “scandalous” and “lacking environmental integrity”. The author condemns the Bank’s duplicitous activities in facilitating the ‘grotesque’ misuse of public funds under the Clean Development Mechanism (CDM) for the payment of billions of dollars of carbon credits to factories and power stations in China, India and South Africa.

The author concludes that in order to achieve its stated mission of poverty reduction, the Bank must resist pressures to ‘simplify’ and accelerate lending coming from powerful borrowers and transnational companies who demand money with no strings attached. Instead of trying to compete with Southern Banks by lowering standards, the Bank must refocus its energies to build a global institution fit for the 21st century by targeting finance towards best-practice projects and programmes with robust social and environmental design and solid frameworks to prevent corruption and ensure proper monitoring and effective implementation.

The answers to accountable development finance will not stem from public-private partnerships, “natural capital accounting” nor slick IT initiatives, the “blogosphere” or “cyber utopia”, argues Rich, but in progressive leadership at the World Bank Group. This means that leaders must have the conviction to face down the old guard and redesign the Bank as a financial institution and development bank that rewards attention to social and environmental issues, good governance, and rule of law, equity and sustainability.

As well as presenting powerful arguments for reform, the book is crammed full of facts about the Bank and international development finance. It also documents two decades of civil society campaigns to hold the Bank accountable and promote reform. For these reasons, it will be of great interest to civil society activists and campaigners in the North and South.

Any arguments that this book is already out of date, that lessons have been learned  and the Bank has changed just won’t stand up: in January 2014 the World Bank and IFC were again under intense public scrutiny for their finance for deeply destructive agribusiness and forest destruction masquerading as fortress conservation involving forced evictions and human rights abuses in Honduras and Kenya.

This is why this book is recommended reading for the current World Bank President Jim Yong Kim and his advisors leading the latest ‘modernisation’ drive for the Bank. Will they repeat the same mistakes of past World Bank reforms or will they act on evidence and experience? Will they address well documented weaknesses, glaring gaps and implementation problems in the Bank’s safeguard system? Will they learn from the current atrocities funded with World Bank funds?

Past experience with this global financial institution shows we should not hold our breath.