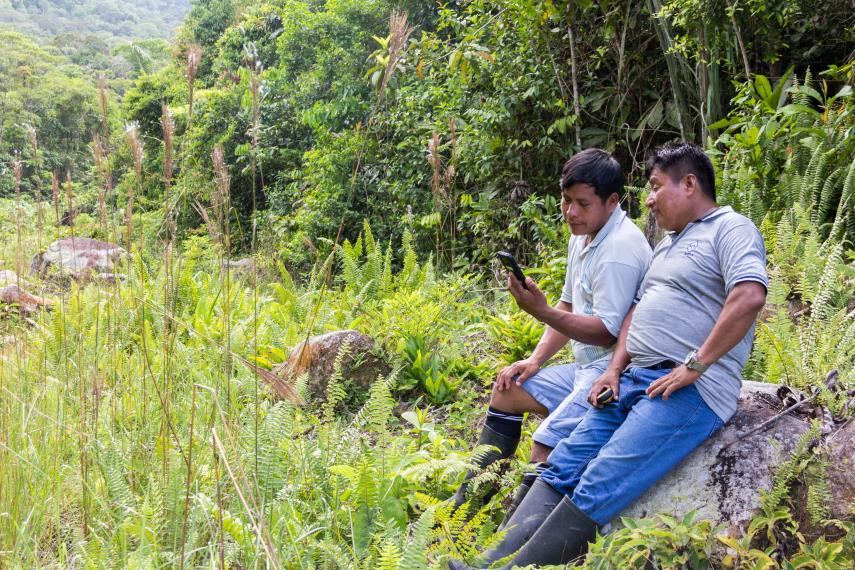 On 4 October 2019, 23 community leaders from Colombia and Peru arrived in the village of Soledad on the foothills of the Kampankis Mountain range in the heart of the territory of the Wampis Nation in northern Peru. 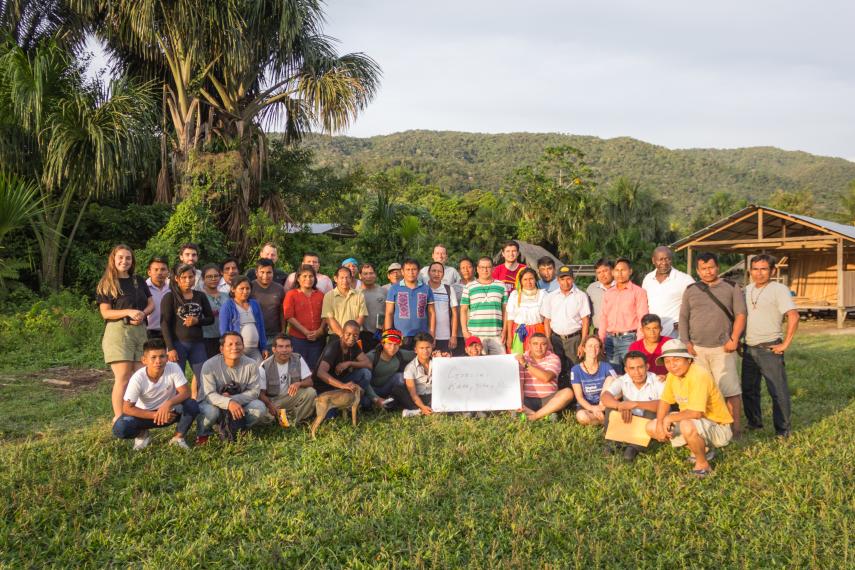 The delegates, who represented Kichwa, Shipibo and Wampis indigenous peoples from Peru and Afro-descendant communities and Embera-Chamani, Huitoto and N+pode+mak+ indigenous peoples of Colombia had travelled for multiple days to attend the four-day encounter. They came together as part of Forest Peoples Programme’s bi-national programme of work in Peru and Colombia to discuss and share strategies and challenges for protection and stewardship of their territories — many of which are under threat from armed conflict, the narcotics trade, the extractive industries (including mining, oil and logging) and the expanding agribusiness frontier in the Amazon.

Perversely, some of our partners — such as the Kichwa in San Martin, Peru — face hostility and threats from those who regard forest communities and indigenous peoples as an ‘enemy of conservation’, rather than as strategic ally.

However, whether the threat comes from the extractive industries or ‘fortress conservation’ interests the price that these peoples all have to pay for their efforts to protect their forest lands and rights to their lands and cultures is defamation, intimidation, violence and sometimes even life. In Colombia, this situation has taken a drastic turn for the worse in recent months as our Afro-descendant partners have had grenades hurled into their community meetings, while an Embera-Chamani representative of the Resguardo Indigena Cañamomo Lomaprieta in Caldas has been forced to leave the territory following escalating assassination attempts. 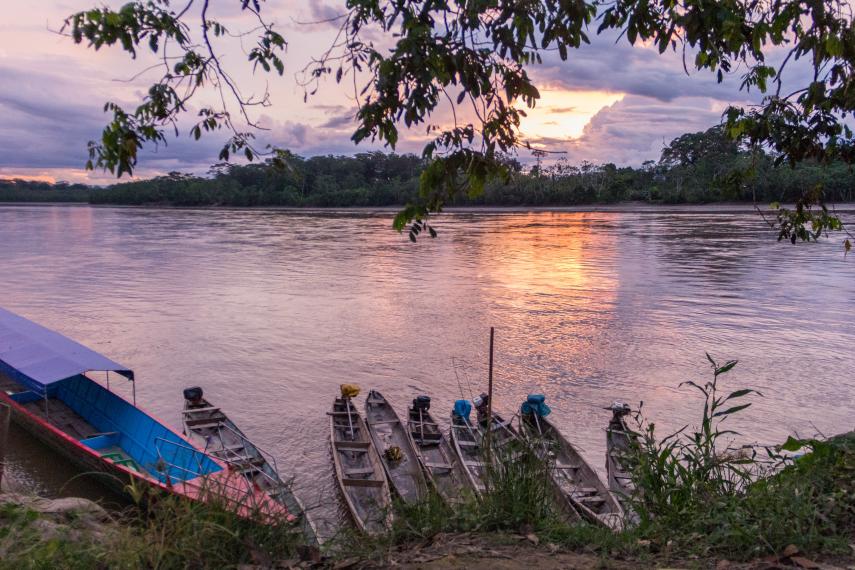 The choice of Wampis territory as a location for the workshop aimed to inspire our partners with the evolving story of the Wampis, who are one of the pioneers of a new vision of self-determined development for indigenous peoples in the Peruvian Amazon. The Wampis Territorial Government was formally founded in November 2015 after years of preparatory work. It aims to take proactive steps to govern the full extent of their traditional lands in accordance with the legal obligations of the Peruvian state vis-a-vis the rights of indigenous peoples and is built on a horizontal system of governance with decisions taken by a people’s assembly. These shifts are inspired by their own historic models of organisation and a reflection on the limitations of a village-based system promoted by the Peruvian government over many years.

The power of maps

The focus of our encounter in Wampis territory in 2019 was technology, as FPP shared ground-breaking new mapping and monitoring tools developed by one of our allies, Digital Democracy (DD). DD are a unique actor in a small ecosystem of tech allies for community groups, combining tech savvy activism with a deep personal insight into indigenous peoples’ and community struggles for social justice; a bridge between the world of developers and off grid communities.

Since 2014, FPP has accompanied early pilots of these tools in both Guyana and Peru which today are known as Mapeo. The work with the Wapichana people of Guyana has resulted in an interactive map documenting the threats to their territory. The collaboration with DD stemmed from a challenge we had faced for many years: maps were a source of power for many of the communities we work with, a strategic tool with the potential to reinforce claims over lands, make their own plans to govern their extensive lands and hold those to account for land conflicts and environmental impacts.

Despite this potential, and the great leaps forward in tools such as GPS and smartphones for gathering georeferenced data, the tools for managing and publishing the complex geographic information described by these maps remained beyond the reach of most communities and in the hands of GIS specialists. Instead, our partners were demanding decentralised solutions to enable multiple mappers and monitors to gather data at the same time, make it available for their own analysis and decision-making processes and then control what data they share, with whom, how and when.

We needed a different solution, one which harnessed the increasing sophistication of smartphones, which can take a GPS point and associate it with high quality photographs. New open source apps like ODK even allow users to develop their own survey forms; however, even though it functions offline and has made gathering high quality data much easier, the challenge of how to manage this data and prepare it for sharing either with your own people or with an external audience remains. This data still needs onerous integration in much more sophisticated programmes which are often off limits to the vast majority of local communities — either because of their dependence on high speed internet or their technical complexity.

This is where Mapeo aimed to fill the void, first to monitor and document what is happening to the land, and then to allow the user to visualise this data and prepare maps or reports for internal use or publication. Crucially, all of this needed to function without access to the internet.

Over four days our partners were introduced to the various features of Mapeo including through numerous field exercises. A mobile app (Mapeo Mobile) which functions entirely offline can be used to either take a photo and add a brief observation, or to fill in a bespoke survey form. The data can then be synchronised offline with a laptop with the Mapeo desktop app installed. The app allows users to immediately see the data either in a gallery of photos or on a map – either a satellite map for those users who haven’t yet developed their own base map, or a map of their choosing.

Once the data is uploaded, users can select the points they want to view and either prepare a map or a report on this basis. Crucially, this gives control of the data to the people who generated it. They can choose what data they wish to share more widely with government agencies or the media and what information is for internal processing and decision making. 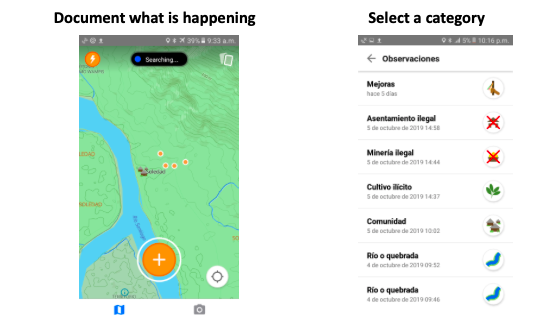 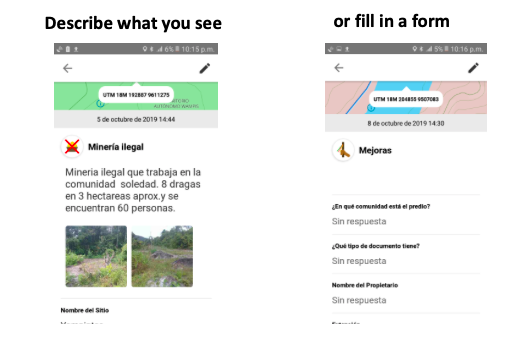 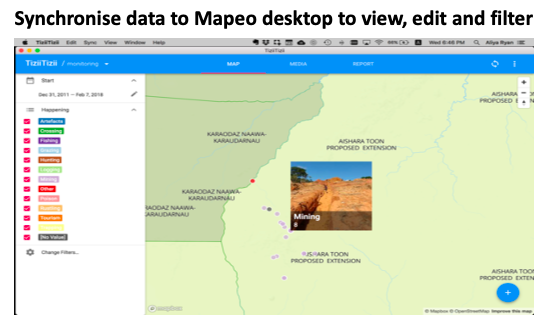 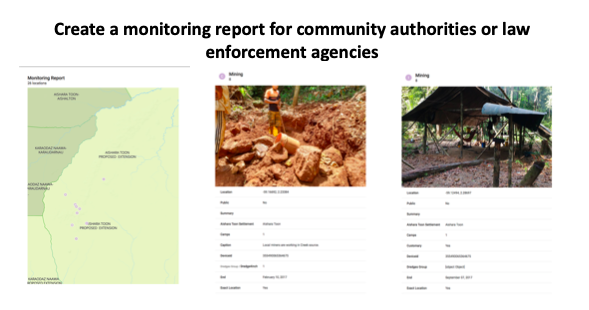 A monitoring or mapping process is only as good as its practitioners. Mapping data is inherently sensitive and during the meeting everyone was able to discuss their own systems for control and management of this sensitive data, as well as explain their priorities for their monitoring systems in 2020:

Mapeo isn’t just about monitoring land use changes and plotting these on a map. Mapeo desktop also incorporates a map editor built in the spirit of the Open Street Maps crowd mapping tool, and which is already being used to brilliant effect by the Huaorani and Cofan peoples in Ecuador. More recently, Huitoto of Colombia’s middle Caqueta River have used the map editor to start building up the detailed territory and land use maps they need to justify land claims, as well as to use as a base map for their monitoring data or build their own territorial governance systems.

The tool enables users to integrate points gathered with Mapeo mobile or a conventional GPS to the map editor and then add names or other information. Crucially, the app has a drawing tool so that users can easily trace over satellite information and draw on the mountains, rivers and any other features in their territory which frequently don’t appear in country base maps. 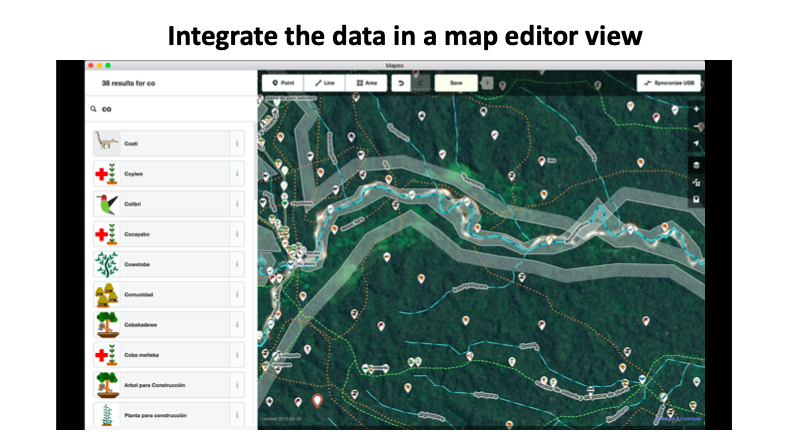 This workshop was the second meeting of its kind as part of an ongoing initiative to bring together FPP’s partners in Peru and Colombia. It was supported by the Ford Foundation’s Latin America office.