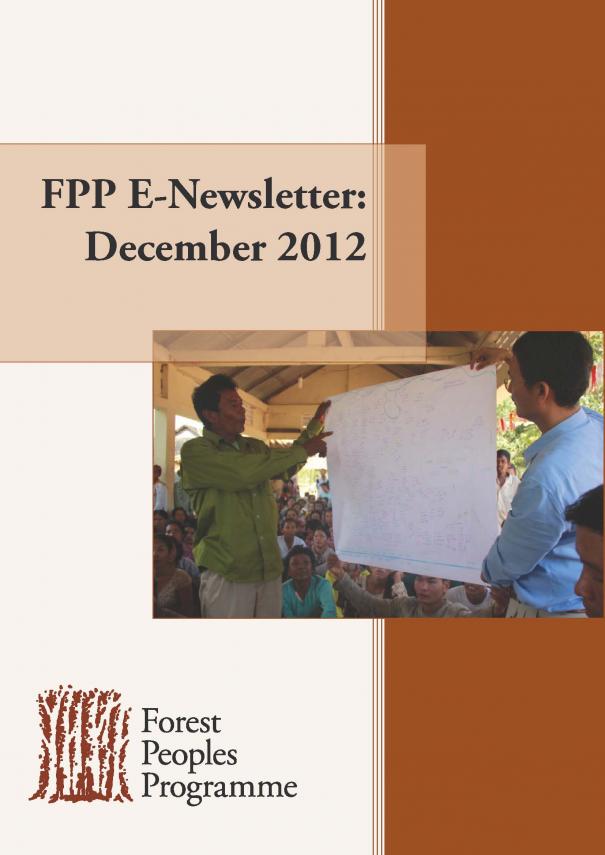 The importance of ensuring respect for the rights of forest peoples’ to control their forests, lands and livelihoods, becomes ever clearer and yet more contested. As the articles in this edition of our newsletter starkly reveal, land and resource grabs are not just being imposed by commercial developers but are being actively promoted by governments, whose principle responsibility should be to protect the rights of citizens. Yet these same impositions are also being resisted, sometimes at great personal cost, by local communities and indigenous peoples.

In Peru, the government has given the green light to a new extension of oil and gas exploration into rainforest areas that the same government has set aside to protect the rights of uncontacted indigenous peoples, known to be extremely vulnerable to introduced diseases. The measure is not only being contested by indigenous peoples’ organisations but has also been criticised by international human rights bodies. In other parts of Peru, social media are being mobilised by indigenous peoples to strengthen their protests against proposed road construction programmes that they fear will open up their forests to yet more land grabbing.

In Liberia, impacted communities from several parts of the country have issued a Declaration against the takeover of their land by palm oil developers, demanding that their rights to their lands and to free, prior and informed consent must be respected. Current contracts between the Government and the palm oil companies explicitly override such rights. In Cameroon, despite strong civil society pressure, the government continues to resist changing the Forest Code so that it would secure indigenous peoples’ and communities rights in forests. In Guatemala, as a guest article recounts, while peasants and indigenous peoples struggle to regain their farmlands and forests expropriated in the colonial era, new mining and logging ventures are causing yet more land to be taken. Forced evictions, police repression and even killings of those who resist are reported.

Building resistance to violations and discrimination has to start from the ground up. While we continue our rights awareness work – including on the rights of indigenous women in Uganda - it is encouraging to report that the Human Rights Commissions in Southeast Asia have now called on the ASEAN Intergovernmental Commission on Human Rights and member states to secure people’s rights in the face of land grabs by agribusiness.

Given the global consensus that exists that ‘sustainable development’ requires respect for rights it is particularly galling to note that both the African Development Bank and government parties to the Convention on Biological Diversity still lag far behind other intergovernmental agencies in their reluctance to recognise indigenous peoples’ rights.

One way to interpret these continuing conflicts and backsliding is to conclude that we are doomed to an endless cycle of ignorance, backed by vested interest, and the repetition of abuse. Yet, the fact that such outrages are being made more and more visible and contested by those suffering the consequences is also a source of hope. Increasingly, land and resources grabs and the denial of forest peoples’ rights are seen as unacceptable both in human rights law and in policy. Our global campaign for justice for forest peoples has to continue and States obliged to respect their rights. The words of St Augustine in his work ‘City of God’ come back to me: ‘Justice being taken away, then, what are kingdoms but great robberies?’