Press Release: International Union for the Conservation of Nature to review and advance implementation of the ‘new conservation paradigm’, focusing on rights of indigenous peoples. January 14, 2011 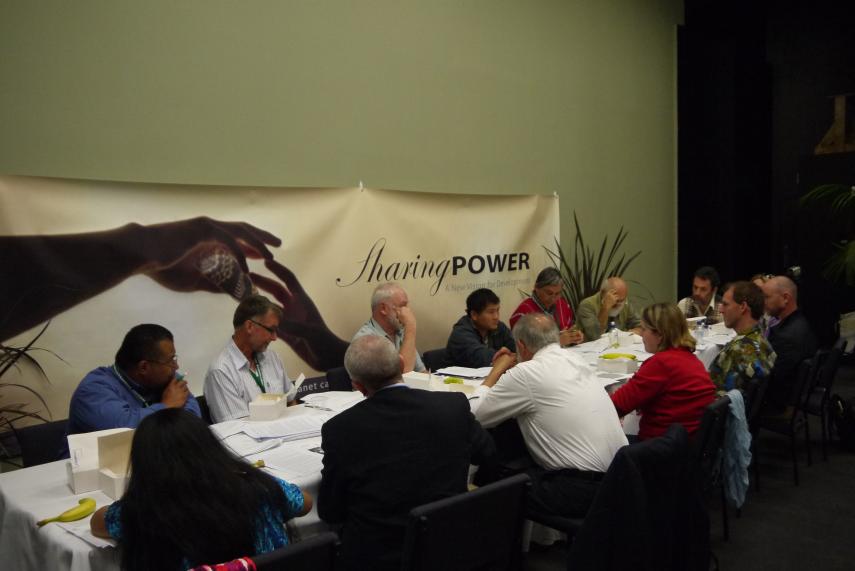 Indigenous peoples’ representatives met with Chairs of Commissions of the International Union for the Conservation of Nature (IUCN) and other conservation organizations, for a high-level dialogue during the Sharing Power conference, in Whakatane, New Zealand, on January 13th, 2011. IUCN agreed to review the implementation of resolutions related to indigenous peoples taken at the 4th World Conservation Congress (WCC4) in 2008, in Barcelona, Spain, and to advance their implementation. These resolutions, along with the Durban Action Plan and the Programme of Work on Protected Areas of the United Nations Convention on Biological Diversity (CBD), are often termed as the “new conservation paradigm”. They are crucial for ensuring that conservation practices respect the rights of indigenous peoples and their full and effective participation in policy and practice. Unfortunately, the actual implementation of these decisions in support of indigenous peoples has been very patchy. The information gathered by the IUCN review processes will feed into its 2013-2016 Programme, to be discussed and adopted in September 2012 in Jeju, Republic of Korea.

Specifically, the meeting participants agreed that IUCN will:

·       Reinforce its multi-level process (encompassing international, regional, national and local levels) to assess and advance the implementation of the “new conservation paradigm”. This process would focus on specific WCC4 resolutions relevant to indigenous peoples.

·       Implement pilot assessments of protected areas at the local level that should be carried out by teams composed of indigenous peoples, IUCN national and international offices, government officials and other relevant actors. The pilot assessments should specify recommendations to address gaps between the observed practices and the ‘new conservation paradigm’. The findings will be reported in national workshops, which will then explore ways to implement the recommendations from the assessments. The assessments would also bring examples of successful projects and best practices to the international community.

·       Carry out a review of the implementation of each of the WCC4 resolutions relevant to indigenous peoples, based on information from commissions and regional and global thematic programmes. This review will identify gaps and make recommendations to address them, which will be included in IUCN’s 2013-2016 Programme.

·       Submit reports on these matters to the United Nations Permanent Forum on Indigenous Issues, the Expert Mechanism on the Rights of Indigenous Peoples, and the CBD.

·       Spread awareness of WCC4 resolutions on indigenous peoples to all national IUCN offices.

·       Improve the coordination between regional and national IUCN offices and indigenous peoples’ organizations.

·       The IUCN Council should be reminded that it was directed by a WCC4 resolution to form a task force to examine the application of the United Nations Declaration on the Rights of Indigenous Peoples to every aspect of the IUCN Programme (including Commissions’ Mandates), policies and practices, and to make recommendations for its implementation.

Udom Charoenniyomphrai, from the Inter Mountain Peoples’ Education and Culture in Thailand Association (IMPECT), said, “The agreements reached in the meeting are good. We are now hoping that they will be effectively implemented.”

Contacts for interviews in New Zealand:

Other contacts for interviews: