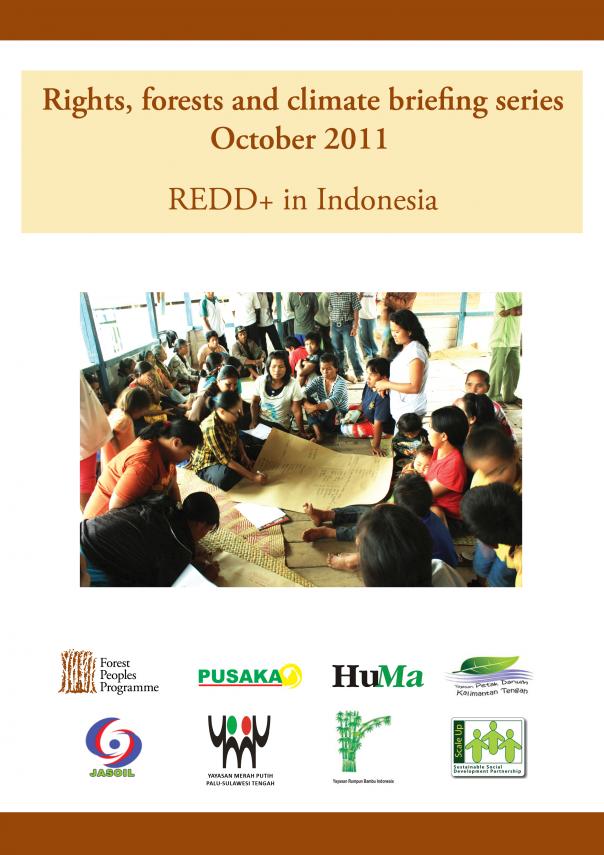 OverviewFor several years the Forest Peoples Programme has worked with the national NGO Pusaka and local partners in six Indonesian provinces and at the national level, to help indigenous peoples, local communities and local NGOs understand REDD+ and the obligations on governments and  REDD+ developers to respect community rights. These briefings draw on this work and review REDD+ developments in Aceh, Riau, Central Kalimantan, Central Sulawesi, Papua and West Papua and at the national level, from the perspective of the rights of indigenous peoples and local communities.

The briefings describe many gaps and challenges facing REDD+ in Indonesia concerning indigenous peoples’ rights. The national briefing considers how forestry regulations for REDD+ fail to recognise and respect the right of indigenous peoples to manage and control their customary territories. The provincial briefings show that government and NGO procedures for FPIC (the right of communities to give or withhold their free, prior and informed consent to planned developments) are still unclear or yet to be developed and do not ensure independent verification of agreements reached with communities.

Lack of transparency and poor information disclosure by REDD+ projects and programmes is common across the provinces covered in the briefings. Although REDD+ policy by national and provincial governments and at pilot projects commits developers to respect the right of indigenous peoples and local communities to FPIC, on the ground this is not happening. The right of communities to FPIC before pilot projects obtain permits has not been respected in any of the REDD+ pilots reviewed.

In Central Sulawesi, restrictions on local development and penalties for subsistence use of the forest are common in management of protected areas, and are yet to be addressed in REDD+ planning. Disrespect for traditional knowledge and practices is described in a REDD+ project in Central Kalimantan. The disconnect between the national legal framework and provincial regulations on indigenous peoples’ rights is covered in Central Kalimantan and Papua briefings. The Aceh briefing describes the aspiration of the provincial government to respect indigenous peoples rights but shows how this is yet to be put into regulation or fully implemented.

Although there are about 40 REDD+ pilot sites and demonstration activities around Indonesia, benefit sharing arrangements between the government, project developers and local communities remain vague or yet to be developed in all the projects reviewed. As a result, concrete and direct benefits for communities are yet to materialise.

Multi-stakeholder consultations on REDD+ are being held at the national and provincial levels, but these processes are dominated by governmental, NGO and private sector members. Where representatives from indigenous peoples or local communities have attended consultations, there is often little feedback to their communities. Traditional community authorities have been sidelined in REDD+ Pilot programmes, for instance in Central Kalimantan, while respect for community rights in land and their customary authorities have been completely disregarded in the REDD+ pilot site in Riau.

On the positive side, the briefings also reveal support for mapping of customary lands and resources by provincial governments in Papua, West Papua, Aceh and Central Kalimantan, and by pilot projects across the six provinces. There is a growing recognition of FPIC and customary rights by provincial governments e.g. Papua, West Papua, Aceh and Central Kalimantan, but these commitments are yet to be put into practice effectively and are undermined by national laws. REDD+ developments in Indonesia are opening a space for dialogue between communities and the government on rights issues and on the need to address ongoing and unresolved land conflicts. Indigenous peoples and local communities are articulating their concerns and calling for the revoking of outdated forest laws and regulations, and for genuine respect for customary rights and FPIC. Governments are starting to listen and respond positively to these calls.

Although only briefly referred to in this series, Forest Peoples Programme, Pusaka and our local partners have provided briefings and trainings on community rights, FPIC and REDD+ to communities, NGOs, governments and companies in all of the provinces and at the national level. These efforts, however, have been small and sporadic compared to the number of REDD+ initiatives being developed. Only a very small proportion of communities that will be affected by current REDD+ projects and the relevant agencies and groups involved have participated in any kind of training relating to their right to FPIC. Further systematic training in rights and REDD+ is clearly needed for all concerned parties. Forest sector reforms to respect the rights of indigenous peoples and local communities need to be undertaken immediately at the national level to provide legal clarity and certainty so that REDD+ regulations at the provincial level, along with pilot projects and demonstration activities can fully and effectively respect rights-holders.

Read the briefings from this series here:-

National Update on REDD+ in Indonesia

SUMATRA: Update on RAPP’s activities in the Kampar Peninsula, Riau

PAPUA AND WEST PAPUA: REDD+ and the threat to indigenous peoples

These briefings are also available in Bahasa Indonesia here.