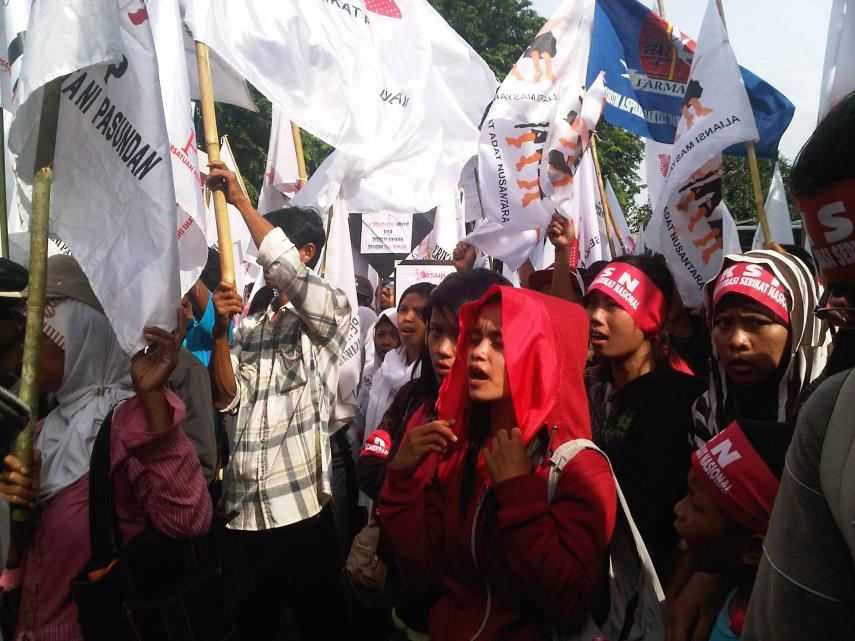 Following high profile cases of police violence and killings of rural people protesting land grabs, a new alliance of rural people - indigenous peoples, farmers, workers and landless people as well as supportive NGOs - is demanding the repeal of laws which allow the State to expropriate people's lands and resources in favour or large businesses. They are also demanding the passing of new laws that secure the people's rights in land and ensure ecological justice, through agrarian reforms and the recognition of indigenous peoples' rights. (See related video).

We of the "Joint Secretariat of the Indonesian Movement for Recovering People’s Rights", is an alliance of Farmers, Workers, Indigenous People, Women, Youth, Students, Village Governance, and NGOs.

Today, Thursday, January 12, 2012 to act in unison in Jakarta and 27 provinces in Sumatera, Java, Kalimantan, Sulawesi, Bali and Nusa Tenggara.

Today, we declare resistance and pledge our alliance against land grabbing facilitated by the SBY-Boediono regime throughout Indonesia.

We view that the agraria (land, water, and natural resources) main problem in Indonesia is the concentration of ownership, control and exploitation of agrarian resources including land, forest, mining and water in the hands of a few people and large corporations, in the middle of millions of small holder farmers and landless people. Ironically, in the midst of that inequality, expropriation of people’s land is still happening.

Expropriation occurred because of the malign conspiracy between the government, house of representatives and corporations. They use their power to pass the Laws such as: Law No.25/2007 on Investment, Law No.41/1999 on Forestry, Law 18/2004 on Plantation, Law No.7/2004 on Water Resources, Law No. 27/2007 on Management of Coastal Areas and Small Islands, Law No. 4 /2009 on Mining, and the recent enactment of Law on Land Acquisition. The overall legislation has legalized the expropriation of people's rights over land, forest, mining, fishing areas, indigenous and villages area and territory, all for the mere benefit of investors.

Expropriation of the people also occur easily because of the central and local government and corporations do not hesitate to deploy the police and paramilitary to kill, shoot, detain and other forms of violence if people resist and fight the land grabbing.

The current cases in Mesuji and Bima are evidence that police did not hesitate to kill people who resist the land grabbing. The National Police is clearly and openly has become mercenary for plantation, mining, and forestry companies.

The cases in Mesuji and also Freeport in Papua prove how the police get paid and become companies’ apparatus.

SBY-Boediono administration ways and means in land-grabbing by using the state apparatus, undemocratic law-making to army and national police deployment are in fact congruent with the Fascist New Order regime.

For us Peasants, Fisher Folk, Indigenous People, and Women, the deprivation has made us lose the land which is the source of our sustainable livelihoods.

Looking at these facts, we conclude that the main foundation of the implementation of neoliberal policies of SBY-Boediono administration is land and natural resources grabbing with the acts of violence.

We believe that in order to recovering people’s rights we must immediately implement Agrarian Reform, Village Reform for Ecological Justice.

Agrarian Reform is restructuring the ownership, control, and use of agrarian resources, for the interests of peasants, agricultural workers, and the economically weak or people in general, as summarized in UU No. 5/1960 on Basic Agrarian Law article 6,7,9,10,11,12,13,14,15, and 17. Agrarian Reform is a mainstreaming for peasants, small-holder farmers, fisher folk and other vulnerable community groups to manage their land, forest and water as cornerstone to national prosperity and sovereignty.

Village Reform is the restoration of the rights and authority in the village or other similar name, which had been crippled and made alike by New Order through Law No.7/1979 on Village Governance. We intend to restore the original institution of rural communities with the priceless "Unity in Diversity".

The main framework of Agrarian Reform and Village Reform is toward Ecological Justice. Thus, the overall recovery of the village and agrarian rights of people, is to restore the ecological damage caused by neoliberal policies over the years.

Through this action, we call to all Indonesian people, organizations and movements to occupy and reclaim our land and rights that have been seized by the government and corporations. We invite all the people of Indonesia to form organizations of resistance to all forms of land-grabbing.

We also invite scholars, humanists, religious leaders, and professionals to condemn and oppose all forms of serious violations of human rights carried out systematically by the government in land-grabbing.

The Joint Secretariat of the Indonesian Movement for Recovering People’s Rights demand:

1. To stop all forms of land grabbing and to return and the land for the people.

2. To implement genuine agrarian reform in accordance with the 1945 Constitution and UU No. 5/1960 on Basic Agrarian Law.

3. National Police/ Army to retreat from agrarian conflicts, release the people who are detained in land grabbing cases.

4. To conduct legal audits and socioeconomic against permits and the rights to use agrarian resources both to private corporations and state enterprises.

5. To disband The State-Owned Forest Enterprise (Perhutani) and give broader rights to the small-holder farmers, landless people, village inhabitants and indigenous communities in managing forest.

6. To recognize and protect the rights of peasants through passing the Law on Protection of Peasants’ Rights and the Law on Food Sovereignty as per people’s demand.

8. To restore the village rights and authority by immediately drafting the Law on Village.

9. To enforce workers’ rights by stopping cheap wages politics and outsourcing system, and to build the national industrialization.

10. To enforce the rights of artisanal fisher folk through the protection of fishing areas.

The Joint Secretariat of the Indonesian Movement for Recovering People’s Rights: 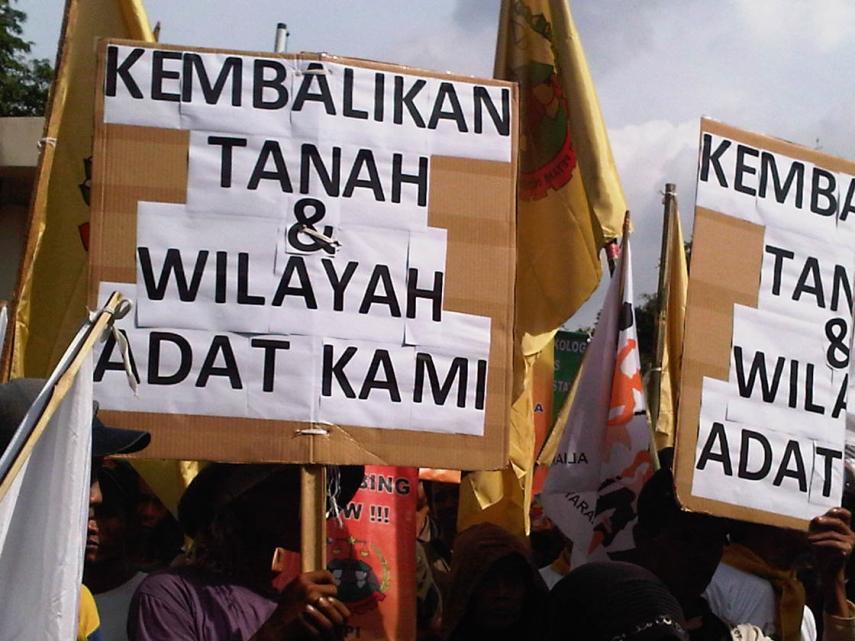