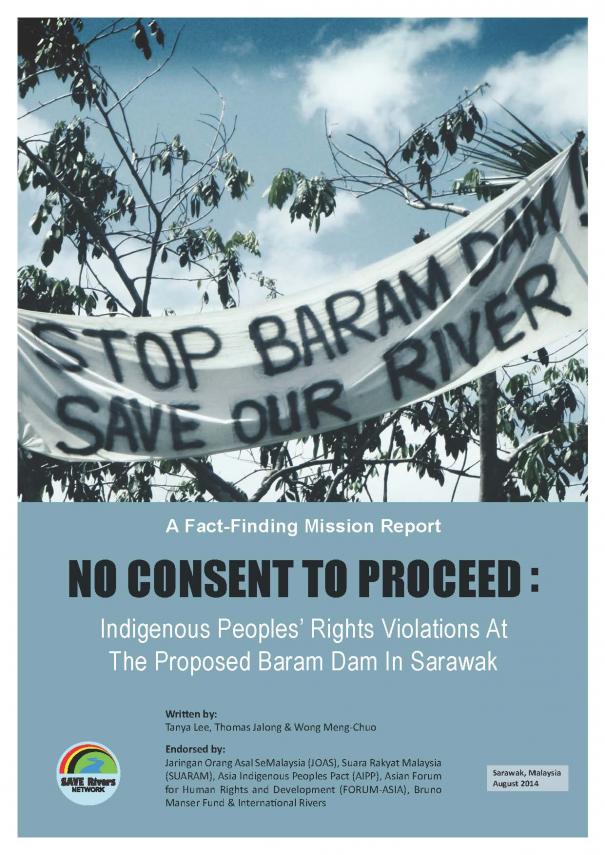 A new report issued by SAVE Rivers, a Sarawak Indigenous Peoples Network, details violations of Dayak peoples’ rights by both the government and companies planning to build a huge dam across Sarawak’s second largest river, the Baram.

Based on detailed fact-finding interviews in 14 Kenyah, Kayan and Penan villages along the Baram, the report shows how they have been denied information, participation in studies and decision-making, coerced into accepting the dam through threats and intimidation and thus denied their rights to their lands and territories, self-determination and to Free, Prior and Informed Consent.

The report is replete with the voice of Dayak interviewees along the whole length of the river objecting to the way their lands and livelihoods will be destroyed by the dam and reservoir, without offering them a reasonable alternative and without allowing them a say in the project.  The report also exposes how decision-making about the dam is framed by unjust laws and political interests which favour investors and politicians at the expense of Dayak communities’ rights.

What the people want is a different kind of development that builds on their own skills and customs instead of being shunted aside to profit outsiders. The report was presented to the National Human Rights Commission, SUHAKAM, which has promised to look into the findings, and is backed by an ongoing campaign by Dayak villagers seeking to blockade access to the dam site.

No Consent to Proceed: Indigenous Peoples’ Rights Violations at the Proposed Baram Dam in Sarawak (13Mb)