PRESS RELEASE: “Selling off our forests is a business for the Peruvian government” 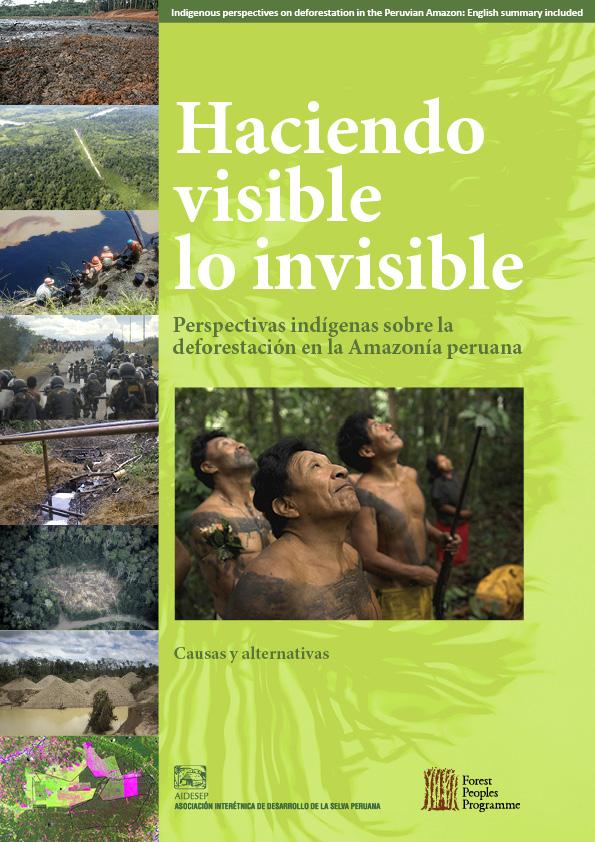 New report finds that Peruvian government is failing to address the real causes of deforestation in the Peruvian Amazon while undermining indigenous peoples’ efforts to protect their forests.

LIMA, PERU (4th December 2014) - On the eve of the arrival of negotiators at a crucial UN conference on climate change, a new report shows that, despite public commitments to protect Peru’s forests, the first Amazonian host of the UN COP is ignoring the real drivers of deforestation and failing to safeguard the rights of indigenous peoples. This, despite the fact that these peoples occupy approximately one third of the Peruvian Amazon and offer the best chance of defending the country’s precious forests.

The report, Revealing the Hidden: Indigenous Perspectives on Deforestation in the Peruvian Amazon, was compiled by Peru’s national indigenous peoples’ organisation, AIDESEP, and an international human rights organisation, the Forest Peoples Programme (FPP). The findings are based on the analysis of Peru’s indigenous leaders and organisations, whose peoples, lands and livelihoods are threatened by deforestation on a daily basis.

Contrary to official discourses that blame migrant farmers for deforestation, the report suggests that the “invisible” drivers of current and future deforestation in Peru include road construction, oil, gas and mining projects, palm-oil plantations, illegal logging operations and mega-dam projects. The report revealed that official analyses of deforestation have placed disproportionate responsibility on migrants from the Andes, while downplaying the crucial role of decades of road construction and explicit colonisation programmes on the part of the government. These schemes actively promoted immigration and were aimed at the economic integration and agricultural development of the Amazon. As a result, according to the authors, an estimated 75% of deforestation in Peru occurs within 20km of a road.

Indigenous defence of the Amazon

Meanwhile, the contributions of indigenous peoples, who continue to protect their ancestral lands from invasion by colonists, illegal loggers and miners, are being disregarded or, at worst, undermined.

The threat to indigenous peoples and lands became all too real to Edwin Chota and other leaders of the Ashéninka community of Saweto in Ucayali when they were murdered in September 2014, allegedly by logging mafia, in reprisal for their longstanding efforts to protect their lands from illegal logging and to secure title to their territory.
“It makes me furious,” said Marcial Mudarra, the President of CORPI, an indigenous organisation in San Lorenzo, speaking about the murders. “Selling off the jungle is a business for the state, but the price is the death of our Ashéninka brothers, who had been denouncing the loggers and protecting their lands. The government closed its eyes and became deaf, blind and dumb. Only when they were dead did it start to take action.”

The consistent failure of the Peruvian government to provide protection for Chota in the face of death threats and to legally recognise Saweto’s lands despite years of determined advocacy mirrors the experience of many other indigenous communities. The report shows that the territorial demands of at least 1174 indigenous communities remain pending, part of an estimated 20 million hectares of indigenous territories with no legal guarantees. Instead, the Peruvian government continues to approve overlapping mining, timber and oil and gas concessions, and to undermine these territories with laws that violate Peru’s human rights obligations.

Despite such challenges, Peru’s indigenous peoples continue to successfully protect their forests. The report documents their diverse efforts to resist land invasions, illegal logging and poaching and the imposition of oil and gas projects. Many have embarked on small scale initiatives to produce coffee and cocoa and practise low-intensity logging in harmony with their forests.

Although the government has acknowledged the contributions of indigenous peoples to forest conservation, its support for further recognition of indigenous lands and community forestry remains only on paper, while indigenous efforts to protect forests continue to be undermined by weak and contradictory laws and by political persecution.

Ignoring the real drivers of deforestation

The report estimates that, in 2013, at least 20% of deforestation in Peru was attributable to illegal gold mining in Madre de Dios and to oil-palm developments in Loreto and Ucayali. These rates of deforestation are projected to increase massively, with at least 100,000 hectares of forest in Loreto requested for oil-palm development and over 50 major dams (each more than 100MW in capacity) in planning stages, and threatening to flood thousands of hectares of forest and displace its indigenous inhabitants.

“Despite this huge expansion, oil palm is not discussed much in these debates about deforestation,” said Alberto Pizango Chota, President of AIDESEP. “It is ‘invisible’, just like the massive oil spills, the multiple dams that are planned, the super highways, the gold rush and the timber mafia. This official silence shows the need for this study – the need to make visible what is not spoken and to expose what is hidden.”

For indigenous peoples, who live in and depend on these forests, the impacts of this development model are often devastating, as shown by the health and environmental disasters recently declared in the Tigre, Corrientes, Maranon and Pastaza river basins, after 40 years of oil operations.

Many of the new developments are taking place at the behest of powerful criminal organisations, often associated with corrupt government officials. For example, a senior figure at the Ministry of Energy and Mines was exposed in 2012 for his part-ownership of a major gold exporter, which was sourcing gold from Madre de Dios, where an estimated 97% of all mining is illegal.

“In the La Pampa area, 30,000 miners are controlling the military commanders, the police and the judges,” said a leader of COHARIYMA, an indigenous organization in Madre de Dios. “The police earn miserable wages, yet now they have big houses and luxury 4-by-4s. Officials pretend they’re intervening, but in reality they do nothing.”*

The report identifies systematic bias in Peru’s land-use planning, which consistently favours large-scale extractive developments, particularly oil, gas and mining projects over environmental considerations and the rights of local communities and indigenous peoples. This is exemplified by the reduction of the Ichigkat-Mujat National Park in favour of mining interests in 2007.

“MINAM [the Ministry of Environment] was created with the objective of protecting the forest but instead it is bargaining with these resources,” said Teobaldo Chamik, a Wampis leader from the Santiago River. “Our territory and its resources have become a business to hand over to investors and capitalists. The government creates the protected areas … but the same government then overlaps these areas with mining and oil concessions.”

The 20th Conference of the Parties to the UN Framework Convention on Climate Change starts in Lima on 1 December. Peru is hoping to establish itself as a leading player in the fight to protect tropical forests and indigenous peoples’ rights as part of a broader commitment to mitigating climate change. Indeed, the country has made unprecedented public commitments in recent years to protect its forests, including a pledge in 2010 to cut net deforestation to zero by 2020.

President Humala reiterated this pledge in September 2014 and announced a major agreement with Germany and Norway to finance and support this vision. Nevertheless, the announcement came hot on the heels of a law (Ley 30230) passed in July to promote investment, while significantly weakening Peru’s already feeble environmental laws. More seriously, the new measure seems to allow the seizure of indigenous lands in order to facilitate large-scale development projects.

The report outlines key steps that could be taken to address deforestation and the violation of indigenous peoples’ rights. These include:

“Peru is at a cross roads,” said lead author Michael Valqui from the University of Cayetano Heredia’s Centre for Sustainability. “The pledges have been made, the solutions exist, and the funds are available, but the will appears to be missing, as long as the government continues to ignore the real causes of forest destruction”.

Sadly, Peru is by no means a unique example. A detailed assessment of nine countries reveals a growing crisis in the world’s forests, and a spike in violations of the rights of indigenous peoples and forest-dependent communities. The findings suggest that climate change mitigation and conservation policies must place community land rights and human rights centre stage if they are to achieve the goal of effectively and sustainably reducing deforestation. A review of the findings will be launched in Lima on the 8th December,  at a hearing in the presence of the UN rapporteur on the rights of indigenous peoples.

Images, quotes and testimonials are available on our Press Site http://invisibleperu.com/

The Peru study will be presented officially on the 5th December in the Indigenous Pavilion (official venue – 10am)  and in the ‘Indigenous peoples’ Maloca’ (Voces del Clima – 3:30pm).