The chilling effect of threats, violence and criminalisation – a key message from the 2019 Southeast Asian conference on human rights and business 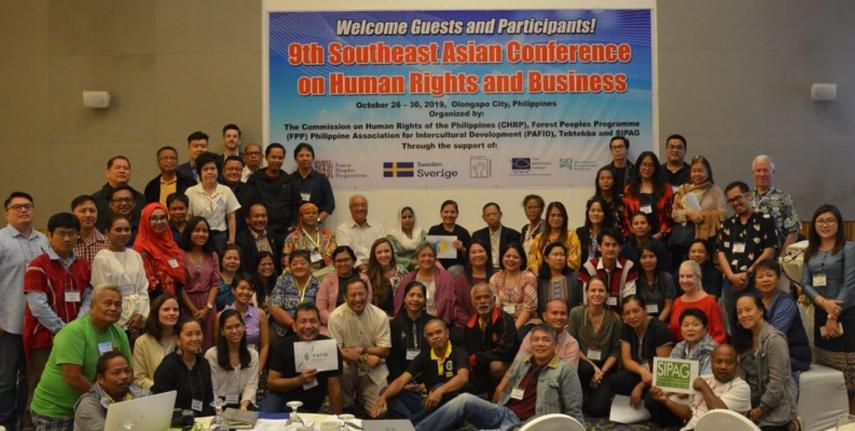 Delegates at the 9th Southeast Asian regional conference on Human Rights and Business in Subic Bay, the Philippines, released the Bata’an Statement, committing ourselves to continued collaboration on tackling business related human rights abuses in the region as well as calling on businesses and states to address these abuses including the increasing violence and criminalisation faced by land and environmental defenders.

National Human Rights Institutions (NHRIs) in Southeast Asia have taken a uniquely leading role in fostering support for work related to business and human rights in the region. Since the passage of the UN Guiding Principles on Business and Human Rights in 2011, an annual regional conference has been held between representatives of Southeast Asian NHRIs, indigenous peoples’ organisations and civil society to explore and extend collaboration in addressing violations of indigenous peoples’ rights by expanding business in the region.

In 2019, the conference was hosted by the Commission on Human Rights in the Philippines, working together with the Indigenous Peoples’ Centre for Policy Research and Advocacy (or Tebtebba Foundation), the Philippines Association for Intercultural Development (PAFID) and the Forest Peoples Programme between the 27th and 30th October.

Before the conference, the delegation was welcomed by the nearby Aeta communities of Pastolan and Kanawan, whose lands overlap with the Subic Bay Freeport Zone, a special economic zone. Both Pastolan and Kanawan have acquired official titles over their ancestral lands and are now deciding how best to manage their domains with or without formal agreements with the local management authority.

Visiting Pastolan and Kanawan provided a valuable jumping off point for the conference itself where the thematic foci included the risks and opportunities to indigenous peoples and local communities presented by special economic zones (SEZs) and renewable energy projects in the region, in recognition of the rise of investment in renewable energy initiatives across Southeast Asia as well as the high number of SEZs.

The conference noted “the increasing use of litigation, intimidation and the threat of violence as a chilling strategy impacting indigenous peoples, and with distinct impacts on women as human rights defenders” and called on “all parties to adopt zero tolerance for such tactics”. Such violence and intimidation were highlighted in cases throughout the region, echoing similar findings by the UN Special Rapporteur on the Rights of Indigenous Peoples. The current National Inquiry on Human Rights Defenders being carried out by the Commission on Human Rights in the Philippines is expected to shed more light on how this is happening in the Philippines.

At its conclusion the conference participants released the ‘Bata’an Statement’, drawing together the assembled experiences and knowledge of the participants to provide an analysis of the key issues within the region, and present recommendations for action to address these.

As well as calling for zero tolerance against killing and violence in supply chains, participants also called for the prioritisation of indigenous-led renewable energy projects, for businesses and states to consider the risks to indigenous peoples and local communities posed by the expansion of renewable energy and the deliberate and conscious participation of women in all decision-making processes with regards to the utilisation of land.

We thank the Stockholm Environment Institute, the Swedish Government, the Rights and Resources Initiative and the Samdhana Institute for their technical and financial support, without which the conference would not have been possible.