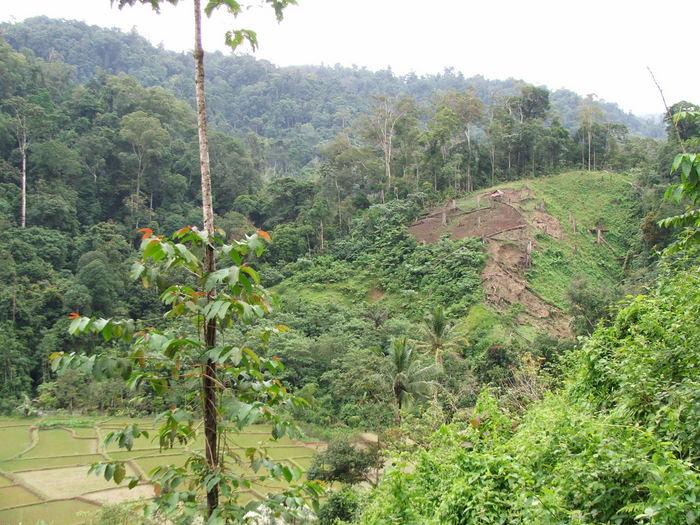 Encouraging investment in Indonesia’s sustainable development may indeed be important, as President Jokowi has said and I agree, but if this development makes people poorer and leads to protest and conflict in our society, then it is self-defeating. Investors need security, so we need to make our country secure for our own people if we are to make it attractive to future investors.

This was the conclusion of Emil Kleden, the Director of the Foundation for Sustainable Forest Peoples (YMKL) in Jakarta, in a press conference held on 28th November, held at the closure of a three-day conference on the theme of ‘Self-Determined Land Rights’. The meeting brought together activists and community representatives from Sumatra, Java, Kalimantan, Sulawesi and Papua, and was also attended by academic land rights experts, national NGOs and institutions like the World Bank, which are seeking to encourage policies that secure communities’ rights to access land and forest resources. The meeting was hosted by YMKL and sister organisation, Pusaka, with the support of the Forest Peoples Programme and Rainforest Foundation Norway.

Dr Rikardo Simarmata, the lead academic and lawyer, who had produced a wide-ranging report summarising the land rights context in Indonesia for the conference, notes that currently there are many indigenous peoples and local communities who now find themselves in areas classed as State Forests or concessions for plantations and who are thereby deprived of secure rights. This is resulting in land conflicts all over the country. ‘People are losing their lands and livelihoods and becoming poor’ notes Dr Simarmata.

The good thing is the government has recognised this problem and realises that land security is fundamental to effective development and protecting the environment. However, notes Dr. Simamarta, the government’s ambitious targets for land reform and for recognising indigenous and other peoples’ rights in lands and forests are far from being realised.  If it is serious about meeting its targets and securing land for the poor, the government must simplify the currently over-complex and highly bureaucratic regulations. Inter-Ministerial coordination must be stepped up. Budgets for land rights recognition must be increased. Land security must be extended to the thousands of communities who have had industrial concessions handed out over their lands without regard for their prior rights. The government must ensure that these rights are enforceable first by not issuing further concessions over areas recognised as indigenous territories and, secondly, by affording them legal power to sue for lands seized without their consent.

Erwin Basrin from the Akar Foundation in Bengkulu Province notes that the government’s policies are contradictory. On the one hand, the government says it want to resolve conflicts and help the rural poor have secure access to lands, but, on the other hand, it is promoting infrastructure and mining projects which override their rights. In Bengkulu most of land is classed as forests making it hard for farmers to get land title. Action is needed at the local level, not just in the centre, to overcome bureaucratic inertia.

Harry Oktavian from the Pekanbaru-based NGO, Bahtera Alam, notes how Riau is a strategic development pole between Johore State, in Malaysia, Singapore and Riau in Sumatra. Riau has developed rapidly due to oil and gas wells and now hosts millions of hectares of pulpwood plantations owned by Asia Pulp and Paper and APRIL, and oil palm plantations, run by the world’s largest palm oil companies, like Wilmar, Sime Darby, Musim Mas and Sinar Mas. These profitable industries have brought revenue to the State but are marginalising the numerous indigenous and Malay peoples whose lands they are taking over. The original forests, after being depleted by logging companies, are now being cleared by plantation concessionaires. Whole villages have been erased by this process or are enclaved within a sea of Acacia trees from which they get no benefit.

"Remarkably, the communities social and cultural values have so far survived, but for how much longer?", says Oktavian.

Bahtera Alam has worked with Riau communities and the local government to get some community lands recognised as customary forests (hutan adat). These are precedent-setting for Riau, but the process is extremely onerous and takes years of NGO support. In line with a recent, largely unenforced, government regulation which required companies to allocate 20% of their pulpwood concessions as ‘livelihood plantings’ (tanaman kehidupan), Bahtera Alam has also worked with the pulpwood giants to pilot setting aside community lands for community rubber or timber smallholdings. The process is, however, also extremely complicated, notes Harry. It first requires NGOs to map the land overlaps, then community-company negotiations about areas and marketing deals, and then endless meetings with the local government to issue decrees authorising the arrangements. All this just to get small areas allocated, even though these are just use rights and not even land titles. And now the government has just cancelled the regulation, says Harry, meaning all this precedent-setting work may go no further.

In South Sumatra, Aidil Fitri of the Hutan Kita Institute (HaKI) reports,  HaKI has been working with YMKL to try to get land security for communities, whose lands were classed as a wildlife reserve even after their settlements were already established there. The laws regulating such reserves disallow conservation partnerships with the local people and land titling is not possible. And land ceiling laws which anyway only allow allocations of between 2 to 5 hectares per family would make economies based on a mix of farming and conservation impossible. These kinds of complex bureaucratic obstacles result in irresolvable land disputes, notes Aidil.

"I live in a very hot and slippery place", says the indigenous rights lawyer, Zulkifli Bujang from YMKL partner, Nagari Institute in West Sumatra. The palm oil giant Wilmar has huge plantations in the north of the Province.

"Where I am working there are 50 communities whose customary lands were leased out as concessions and who are in conflict with Wilmar’s own estates and those of its suppliers. People are deprived of land, despite their strong spiritual and cultural connections to their areas which underpin our identity as Minangkabau," he says.

"Our clans, lineages and village republics (Nagari) have been deracinated."

The problem, he notes, is that the government does not recognise communities’ land rights before allocating the areas to companies, so communities cannot negotiate with incoming companies as recognised land owners. Behind this, notes Zulkilfi, lies a party political system which relies on huge ‘donations’ from companies to run electoral campaigns.

"That’s why the government officials don’t want to recognise our land rights as Minangkabau, as indigenous peoples," he says.

More positively, Zulkilfi notes, through filing a complaint with the Roundtable on Sustainable Palm Oil (RSPO), Wilmar has been persuaded to hand land back to the Kapa people in West Pasaman district, a process which is currently being concluded.

"But we need a more effective legal pathway to make such land restitution easier and more secure for all parties’, he notes. ‘From our point of view, this is about our culture and our identities and ensuring that we have a future."

Franky ‘Angky’ Samperante, Director of the Jakarta-based indigenous rights NGO, Pusaka, which has an extensive community-support programme in eastern Indonesia, then highlighted the huge problems being faced by the 466 indigenous peoples of Indonesian Papua, the western half of the island of New Guinea. The area is now administered as two provinces (Papua and West Papua) which together have a population of 4.2 million people dispersed in some 4,500 villages. Most of the area of 424,500 square kilometres is covered in forests, even the steep terrain of the interior. The area suffers from multiple impositions, says Angky. A heavy military presence has resulted in numerous killings and thousands of refugees. Transmigration settlements have focused on settling Javanese in farming colonies in the security ‘red zone’ along the border. Imposed land use classifications take no account of prior rights and uses. And then massive concessions have been imposed, for mining, logging and plantations.

"Peoples are being made landless and impoverished, forcing them off their lands and into ill-paid wage labour" remarks Angky, noting that estate workers get less than US$5 a day for their labour.

"Despite a relatively progressive legal framework - better than other parts of Indonesia, at least - and despite Government commitments to uphold human rights, in practice these policies are not being applied. Land rights are not being recognised, even though customary laws and customary land rights are very strong. Conflict is growing. Although we have been able to get some customary forest (hutan adat) areas recognised, the process is very complex. The scale of the problem is too great for such a piecemeal approach."

We need to insist on these communities’ land rights being recognised first before there are ‘Free, Prior and Informed Consent’ processes through which they can engage with incoming investors, says Angky. So far about 1.2 m hectares of Papua have been handed out in concessions, he notes, but only 300,000 hectares have actually been opened up. All the unopened lands, and lands opened without community consent, need to be given back to the people.

Summing up the findings from the conference, Emil Kleden, noted that government targets to redistribute lands and forests to indigenous peoples and local communities are not being achieved because of contradictory policies, onerous and very bureaucratic procedures and a lack of ‘political will’ both at the centre and in the regions.

"Indonesia is a country rich in regulations and poor in their application. Academic studies confirm that people are losing their livelihoods and people are getting poorer, at the same time as palm oil production and export revenues increase. The President has just issued a decree to make it easier and quicker for companies to get permits. We need the same for securing our own citizens’ land and forest rights first," said Kleden.