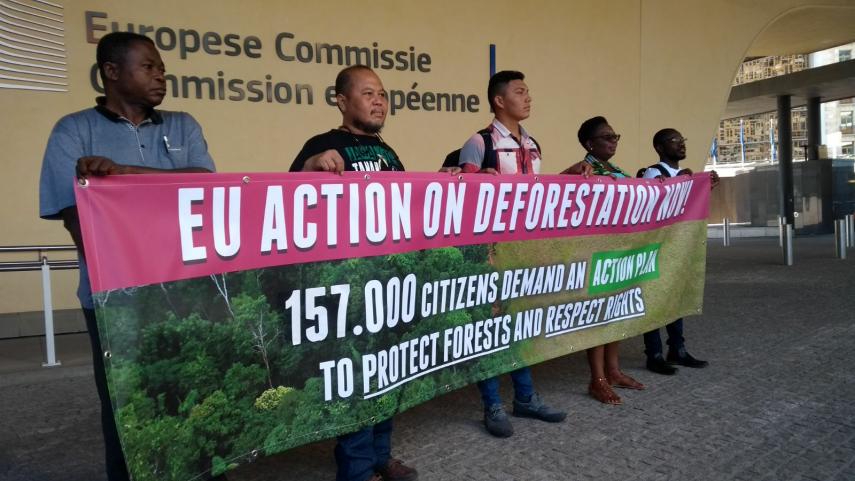 Brussels June 29: After taking part in meetings with the Amsterdam Declarations Partnership and DG Trade to present rights-based solutions for achieving deforestation-free trade, the 'Closing the Gap' delegation of indigenous leaders and human rights activists from Liberia, Indonesia, DRC and Colombia are travelling to Brussels to deliver a petition signed by 160,000 people urging European Commission President Jean-Claude Juncker to uphold the European Union’s international commitment to halt deforestation by 2020 by supporting an EU Action Plan to protect forests and respect forest peoples’ rights.

In early June, environmental and human rights NGOs requested a meeting to officially deliver the petition to President Juncker, but their request was declined. Activists and community representatives from tropical forest countries are now visiting Brussels in the hope that Vice Presidents Timmermans and Katainen will meet them to hear why EU action on deforestation is critical and urgent. They will gather today in front of the Berlaymont at 11 a.m. to publicly call for EU action on deforestation that ensures their land security and upholds their human rights. They will be available for interviews.

One of the delegates, Franky Samperante of the indigenous Indonesian NGO Pusaka is in Brussels to raise awareness of the communities suffering land conflicts, violence and intimidation at the hands of oil palm, pulp, paper and logging companies. He explains:

"The forest is the source of our lives. This is why deforestation removes and limits our ability to live with dignity. Logging and plantation companies in Indonesia continue to demolish, evict, and destroy our forests and agro-forests. Communities have lost and are still losing their livelihoods. They now have difficulties in finding decent sources of food. Their indigenous knowledge is threatened and they are suffering malnutrition and health problems. Even well-planned development assistance programmes cannot replace the benefits of the forests being lost. Action has to be taken to stop rights violations and forest clearance."

At least 10 million hectares of tropical forest - an area more than three times the size of Belgium - continues to be lost and degraded every year, harming forest communities’ rights and emitting 10 per cent of global emissions per year. The production of agricultural commodities such as beef, palm oil, soy and cocoa, are responsible for up to 80 percent of this loss. The EU is the second biggest importer of such products and European banks and businesses are major financiers and investors in agribusiness expansion in tropical forest countries.

The petition was an initiative of 20 NGOs worldwide. It was started in May 2018, following the publication of a feasibility study offering 20 policy options to act on deforestation. This study was commissioned by the European Commission after the European Parliament and the Council mandated the Commission to develop an Action Plan to tackle deforestation and degradation by 2020. The EU also committed to halt deforestation by 2020 when it adopted the Sustainable Development Goals.

Since then, Member States, including Denmark, France, Germany, Italy, the Netherlands, and the United Kingdom, Members of the European Parliament and progressive companies have also called for action. It remains unclear whether the European Commission will propose anything at all.

“Juncker’s legacy on forests lies in the balance: the EU has only 18 months before the 2020 deadline, so EU action has to happen on his watch. With companies, Member States, NGOs and the European Parliament behind him, what is he waiting for? This is widely seen as a litmus test for how serious the EU is about its commitments to address the impact of EU consumption globally.”

“The question of sensible European policy on trade and deforestation is also about ensuring well-informed and robust policy dialogue. We see a strong business lobby engaged in discussions with EU decision-makers, while the voices of the communities whose lands and forests are taken to feed European supply chains are ignored. The EU must abide by its own commitments to respect human rights and needs, and recognise that communities whose rights are jeopardised by EU-supply chains are primary stakeholders in EU trade and deforestation policies.”