In the early morning hours of Saturday 30th October, after two weeks of intense, late-night sessions and down-to-the wire negotiations, the Parties to the Convention on Biodiversity (CBD) at their 10th Conference (COP 10), adopted a “package” which consists of a protocol on Access and Benefit Sharing, a new Strategic Plan, and a strategy for the mobilization of resources to effectively implement the convention. In addition, more than forty other Decisions were adopted, including Decisions on: Biodiversity and Climate Change; Protected Areas; Sustainable Use; and Traditional Knowledge, Innovations and Practices. Indigenous peoples celebrated some victories, but also returned home with concerns.

Two long and intensive weeks in Nagoya, Japan, culminated in many issues being discussed and negotiated right up until the very last day of the COP. Indigenous peoples, united as the International Indigenous Forum on Biodiversity (IIFB), actively engaged in nearly all agenda items with their deliberations and proposals.

One of the issues in which the IIFB was heavily involved was the development of the new CBD Strategic Plan, which consists of a mission and 20 targets intended to guide action by Parties in the coming decade. It was a great moment when the Parties unanimously decided to accept the target on traditional knowledge and customary use that was drafted by the indigenous participants (target 18), and some Parties even remarked that it was only fair and logical to let indigenous peoples decide on the target for this issue[1]. Parties also committed to foster the full and effective contributions of women, indigenous and local communities, and civil-society organizations in the implementation of the objectives of the Convention and the Strategic Plan.

With the adoption of the Nagoya Protocol on Access and Benefit-sharing (‘ABS Protocol’) [2], governments have accepted to take domestic and international measures to uphold the customary and human rights of Indigenous Peoples, and to protect their traditional knowledge with respect to genetic resources. In their closing statement, the International Indigenous Forum on Biodiversity stressed, however, that much more still needs to be done to end bio-piracy. Disappointing for indigenous peoples was that the UN Declaration on the Rights of Indigenous Peoples is only ‘noted’ in the ABS Protocol and the Strategic Plan, which implies that respect for, and recognition of, the rights of indigenous peoples in relation to biodiversity is still not fully supported and accepted by (some) Parties.

The other COP 10 decisions contained more or less equally positive and less positive outcomes. A Code of Ethical Conduct was adopted to ensure the respect for the cultural and intellectual heritage of indigenous peoples and local communities; and customary sustainable use by indigenous peoples and local communities has been recognised to be very important for sustainable use and conservation of biodiversity. On the other hand, despite repeated calls by the Indigenous Caucus to accept the important link between secure land tenure and customary sustainable use, Parties did not acknowledge this in their Decision dealing with sustainable use of biodiversity. But indigenous peoples will surely use the opportunity of the new focus on customary use, in the revised programme of work on traditional knowledge, to address this important linkage again in the coming years.

These are some positive and challenging aspects that can already be discerned, but what all these decisions will mean and entail for indigenous peoples and local communities living in daily interaction with biodiversity will require some time to be fully assessed.

Full outcomes of the CBD COP10

Video recording of the final Plenary session at Nagoya COP10 is available in English, Japanese and French. (230 minutes long). The closing statement of the IIFB statement, read by Jason Pan from Tara-Ping Pu is from 184:49 to 189:15.

[1] Target 18: By 2020, traditional knowledge, innovations and practices of indigenous and local communities relevant for the conservation and sustainable use of biodiversity, and their customary use of biological resources, are respected, subject to national legislation and relevant international obligations, and fully integrated and reflected in the implementation of the Convention, with the full and effective participation of indigenous and local communities, at all relevant levels by 2020.

[2] In full:the Nagoya Protocol on Access to Genetic Resources and the Fair and Equitable Sharing of Benefits Arising from their Utilization 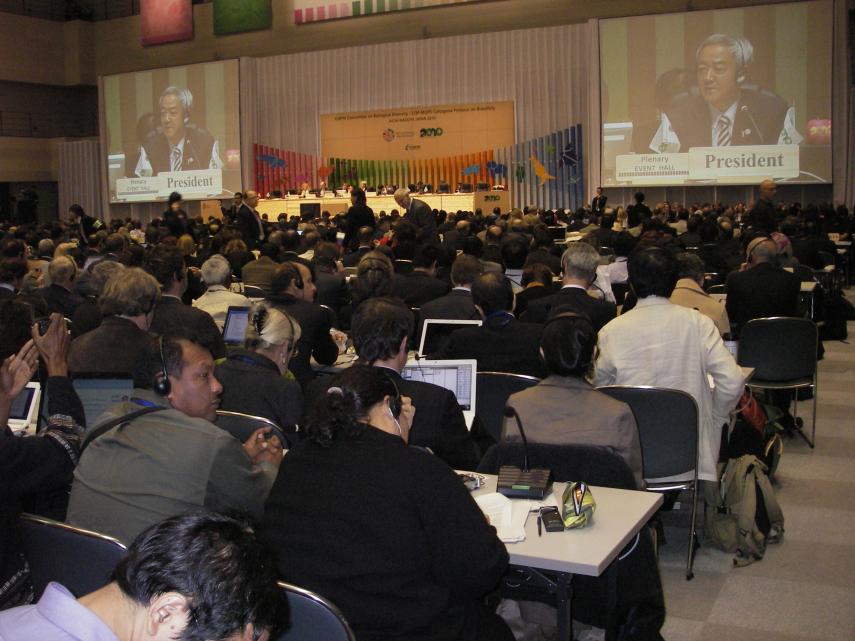 Indigenous peoples at the closing session of CBD COP10, October 2010
By
FPP 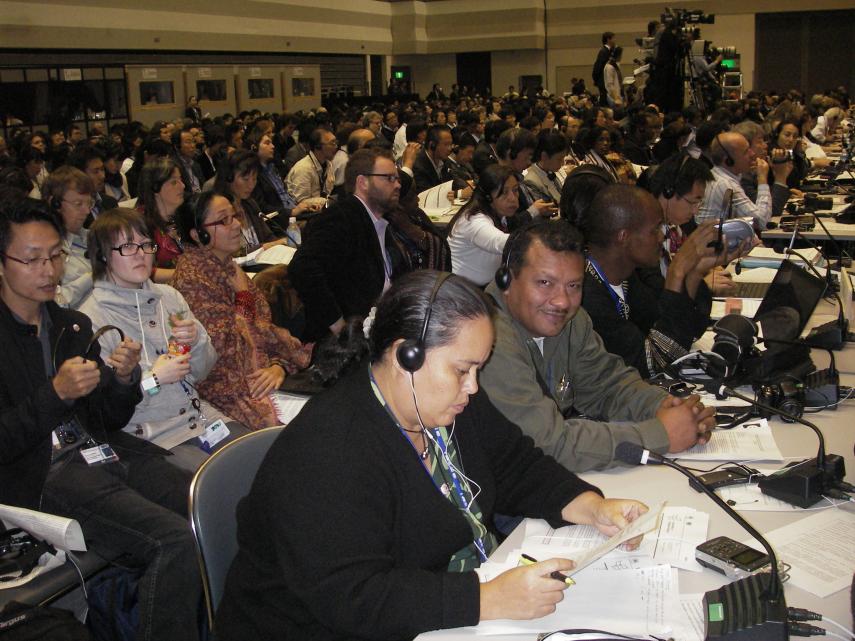 Indigenous peoples at the closing session of CBD COP10, where the final decisions were adopted, October 2010
By
FPP
Related link
Full outcomes of the CBD COP10
Final documents from the CBD COP10 Plenary (the ‘L-documents’) are available in…
Video recording of the final Plenary session at CBD COP10 is now available in E…