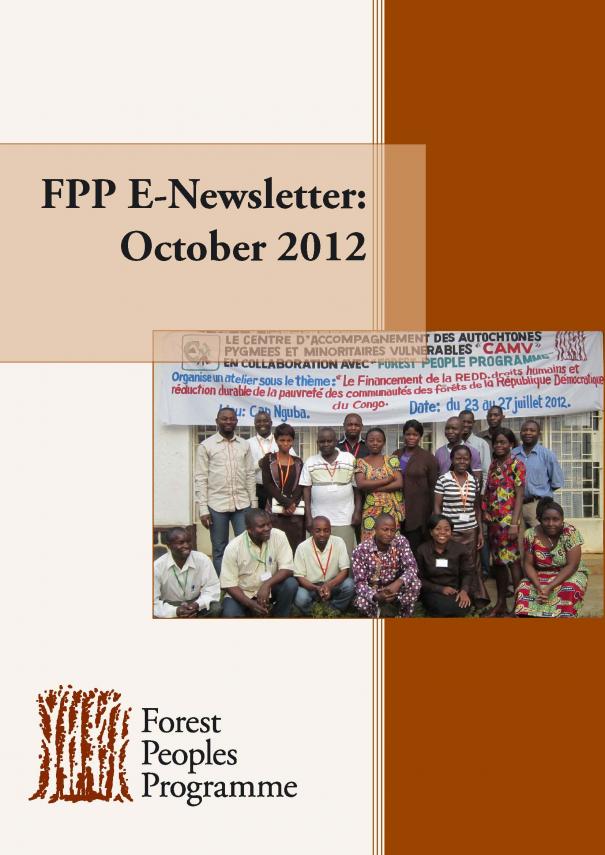 Building a global consensus on how to make the world a better place is hard work. That indigenous peoples now have a voice in global decision-making processes is largely due to their own efforts but we at the Forest Peoples Programme are honoured and enriched by our role supporting and advising this engagement. However, ensuring that the voice of forest peoples and other rural communities is heard globally is likely to get more difficult. The world has just passed a tipping point: more than half the global population now lives in cities, making it that much harder and all the more important to manage forests wisely in ways that secure local livelihoods and respect forest peoples’ rights.

This week Governments and others overseeing the Convention on Biological Diversity (CBD) are meeting in India to review how to make their decisions more effective. It’s an important opportunity for the CBD to affirm that achieving ‘sustainable customary use’, built on traditional wisdom about the environment, requires respect for local communities’ and indigenous peoples’ rights to their lands and resources. Officials of the UN agency charged with looking after the diversity of the world’s culture, UNESCO, which also runs the World Heritage Convention, recently met with indigenous peoples to review how they should address their concerns. The meeting concluded that UNESCO’s procedures must be changed to respect indigenous peoples’ rights. Such policies must be inclusive and protect the rights of indigenous women, as a new policy adopted by the Asia Indigenous Peoples Pact affirms.

Hopes are rising that the new President of the World Bank can now adjust the World Bank’s safeguard policies to properly respect such rights as an outcome of its current policy review. FPP and indigenous partners were also present at the opening meeting of the Green Climate Fund being set up as the funding mechanism to implement the UN Framework Convention on Climate Change. This fund too needs to secure respect for forest peoples’ rights in its operations. Some progress in getting principles put into practice was achieved at the World Conservation Congress in South Korea where resolutions were passed affirming the need to respect the rights and role of indigenous peoples in conservation and where the Whakatane Mechanism, which seeks to reconcile conservation with full respect for rights, gained further support. The urgent need for this revised approach is highlighted by news from Peru where ‘fortress conservation’, which excludes people from their own forests, intensifies. In Venezuela, the Yanomami people in the Upper Orinoco, nominally protected by being within a Biosphere Reserve and a National Park, continue to suffer invasions by illegal mining operations. The Yanomami demand a detailed investigation of alleged abuses and a role in patrolling their territories, so they can look after them effectively.

FPP and partners’ expanding programme in the Democratic Republic of Congo, which is supported by the Swedish International Development Agency, continues its efforts to build local and national awareness of the need to secure land rights and community-based decision-making as a central plank in efforts to slow deforestation. The importance of this is made starkly evident by two new studies. A report sponsored by the Norwegian and British Governments shows that agricultural expansion is causing 80% of global deforestation and a key measure to check this is to secure community tenure. But FPP and its partners’ own detailed research on palm oil in both Africa and South East Asia reveals that even where companies commit to respect these rights as members of the Roundtable on Sustainable Palm Oil, in practice land grabs continue. Voluntary or rhetorical standards are a start, but must be followed with binding requirements, vigilance and enforcement.