“A sweetness like unto death”: Voices of the indigenous Malind of Merauke, Papua 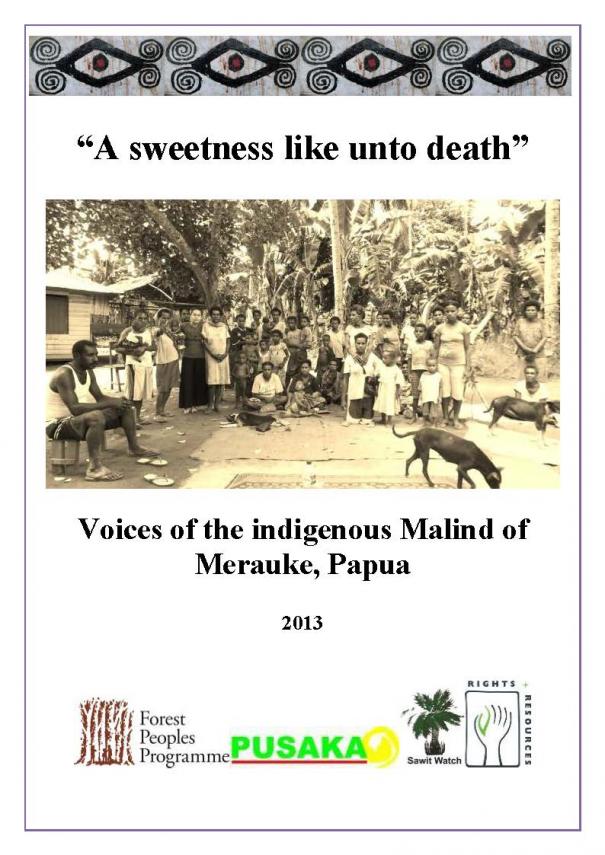 This publication is launched on the occasion of World Food Day, marked by the Food and Agriculture Organisation of the United Nations with the theme of “Sustainable Food Systems for Food Security and Nutrition”. In particular, this report seeks to inform one of the key objectives of World Food Day: to encourage the participation of rural people, particularly women and the least privileged categories, in decisions and activities influencing their living conditions.

Key findings of the report:

This report examines the extent to which the right to Free, Prior and Informed Consent (FPIC) of the indigenous Malind people of Merauke in Papua Province, Indonesia, is being respected by Wilmar-owned sugarcane company PT Anugrah Rejeki Nusantara (PT ARN), in the context of the MIFEE project.

The findings reveal that where local communities are giving their consent to the conversion of their customary lands, this is largely based on insufficient and one-sided information, non-guaranteed promises of economic and social welfare aid, unilaterally imposed terms of compensation, vague or non-existent contracts, and with little freedom of choice and expression. National and local regulations are either not being implemented, or interpreted to suit the interests of the companies and government, or inherently in contradiction with international human rights standards, and are in urgent need of reform.

Particular concerns are raised over the threatened food security of the Malind peoples in light of the conversion of vast areas of their customary lands to mono-crop plantations, as well as the consequences of this rapid and imposed transformation on their livelihoods, culture, identities and very survival as a people.

The findings in this report were used to support a third civil society submission under the United Nations Committee on the Elimination of Racial Discrimination’s Urgent Action and Early Warning Procedures, which led to further recommendations to the government of Indonesia for better recognition and respect of the rights of the indigenous Malind of Merauke from the CERD Committee.

The report is available in English or in Bahasa Indonesia.