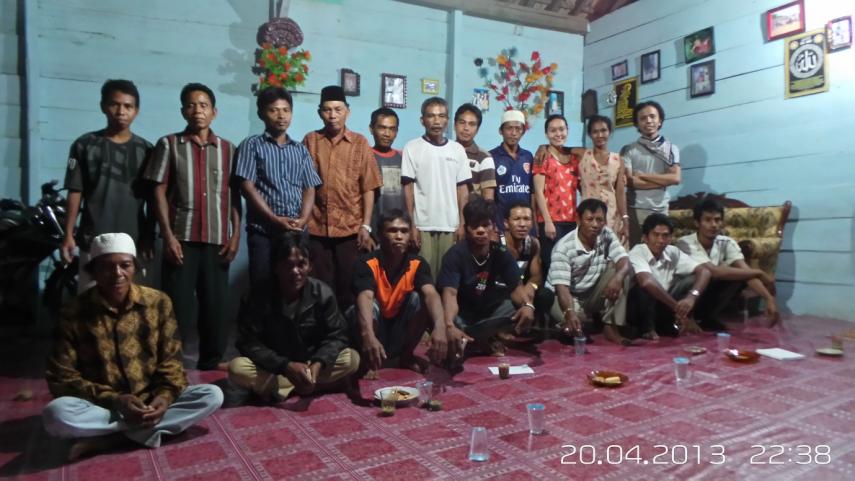 In April 2013, Forest Peoples Programme (FPP) and partners, Setara Jambi and Sawit Watch, visited Wilmar-owned oil palm plantation PT Asiatic Persada in Jambi Province to assess progress in the IFC CAO mediation process underway there since early 2012. The mediation process was the response of the IFC CAO to a complaint received in November 2011 regarding the systematic eviction of 83 Batin Sembilan families and the destruction of their homes by PT Asiatic Persada staff and the Mobile Police Brigade (BRIMOB) in the south of the PT AP plantation.

During their visit in April 2013, the FPP/Setara Jambi/Sawit Watch research team found that while progress is slow and tangible outcomes are yet to be achieved, at least two indigenous Batin Semblian communities (Dusun 4 Sungai Beruang and Kelompok Pinang Tinggi) see great value in the CAO mediation process and they wish to see it continued and improved.

However, of paramount concern to these communities is the sale agreement of PT Asiatic Persada by Wilmar to non-RSPO and non-IFC companies while CAO mediation with the provincial government of Jambi (Joint Mediation Team) is still ongoing. This handover has had serious impacts on the communities’ morale and has created significant anxiety about how the progress achieved through the CAO mediation will be sustained and enhanced. No information was shared with the affected communities and no consultations held, reflecting bad faith and lack of transparency on the part of a RSPO member which is required, in accordance with the RSPO Code of Conduct, to ‘commit to open and transparent engagement with interested parties, and actively seek resolution of conflict’.

In a meeting co-signatory NGOs and affected Batin Sembilan communities (although the latter were not formally invited) held with the Joint Mediation Team on 6 May 2013, all parties present agreed that the Joint Mediation Team would continue the mediation process and that Wilmar, as the former owner of PT Asiatic Persada, still bears responsibility to ensure that agreements made are kept and implemented as required.

In a complaint sent to Wilmar on 14 May 2013, the affected communities and co-signatories FPP, Setara and Sawit Watch, requested clarification from Wilmar on several points, including why the affected communities were not formally informed of the sale of PT Asiatic Persada and what responsibility, if any, Wilmar itself is taking to ensure that the resolution of conflicts in PT Asiatic Persada is achieved. The response received on 31 May 2013 failed to address the majority of these inquiries in any substantial depth. A second complaint, this time sent to both PT Asiatic Persada and Wilmar’s Corporate Social Responsibility Department, was sent on 6 June 2013, reiterating the unanswered queries and further noting serious concerns raised by the response received.

The perfunctory nature of Wilmar’s response to the complaint failed to demonstrate awareness and concern for the livelihoods and rights of the affected communities, which have been deeply affected by Wilmar’s operations. The response made no reference at all to the affected local communities, raising serious doubts as to whether Wilmar has any sense of responsibility or commitment towards resolving the conflicts of its own operations and the well-documented and publicised human rights abuses relating to PT Asiatic Persada.

Since the meeting on 6 May 2013, the Joint Mediation Team has been unable to organise a follow-up meeting with PT Asiatic Persada and no explanation has been given as to why the company is unable or unwilling to attend, despite numerous requests for clarification since then from the co-signatories and affected communities. This heightens existing concerns regarding both PT Asiatic Persada and Wilmar’s commitment to conflict resolution, and the ability and genuine commitment of the Joint Mediation Team itself to resolve these conflicts.

The handover of PT Asiatic Persada without prior consultation highlights a critical weakness of the RSPO: the absence of criteria or guidance on the obligations of RSPO member companies where concessions are sold to non-RSPO companies, particularly where conflicts and conflict resolution are still underway.  FPP, Setara and Sawit Watch communicated to the RSPO that this needs to be urgently addressed as part of systemic reform of the RSPO mechanism. The case highlights yet again the need for the IFC to apply its Performance Standards to the full supply chain of the Wilmar Group, which so far neither the IFC nor the CAO have showed any indication of intent to address, not to mention Wilmar itself. Meanwhile, the affected communities in the PT Asiatic Persada concession remain in a position of uncertainty, frustration and ignorance despite the critical urgency of the situation and its implications for their futures.