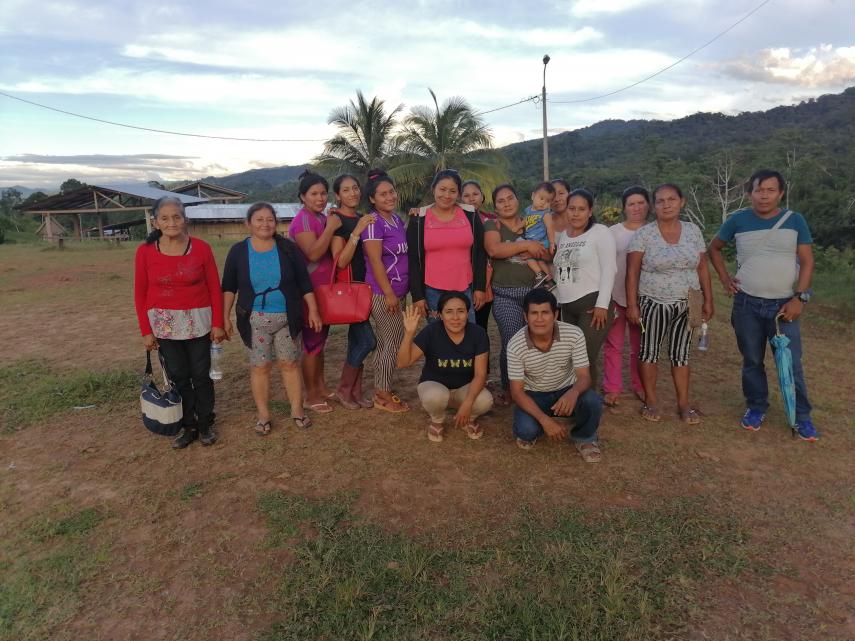 The Kichwa community of Puerto Franco, Peru, announce this week that they are taking the Peruvian Government and the Cordillera Azul National Park to court. They are challenging the State’s refusal to title their traditional lands, the imposition of exclusionary conservation and profit-making from carbon credits sold without their consent in the San Martín region of the Peruvian Amazon.

In a press conference on Thursday 1 July, leaders from the community and indigenous organization the Ethnic Council of the Kichwa Peoples of the Amazon (CEPKA) will explain the legal actions they are taking against the Ministry of the Environment, the Ministry of Agrarian Development and Irrigation, the Regional Agrarian Directorate of San Martin and the National Service of Natural Protected Areas over the State’s failure to comply with its obligation to protect and title the collective territories of Indigenous Peoples, putting their lands and livelihoods at risk.

“The State has confused the people because there was no prior consultation,” said Alpino Fasabi Tuanama, chief of the Puerto Franco community.

“They did not consult the creation of the national Park with us as Indigenous Peoples, as Kichwa, nor their forestry concessions, and they have disregarded our territorial rights.

“We defend our territory and this lawsuit is in support of our claim over our territory, so that no one can discriminate against our environmental practices,” he said.

“This lawsuit is a call to the State to return us the territory which they have taken without the Puerto Franco community’s consent, which today lives with the impacts,” said Isidro Sangama, vice-president of CEPKA.

“The State frequently grants rights to third-parties without even consulting our Indigenous communities and organisations, it does as it likes with Indigenous territories, but we the Kichwa are the ones caring for the forests,” he said.

“The State thinks that this territory is in this condition and remains forested due to the care of the National Park, but they forget that in fact this territory has been cared for by Indigenous communities for years.”

The complainants also say there is not equitable distribution of benefits from the sale of carbon credits generated by the REDD+ Project which has operated in the Cordillera Azul National Park since 2008. Between 2008 – 2018, at least 25 million tonnes of carbon were verified, according to certifier Voluntary Carbon Standard. In fact, the carbon credit market forms part of an exclusionary model of conservation which impedes communities from participating in the governance and communal titling of their lands.

“The community has been excluded from any possibility of titling their lands due to this problem. Hence they have taken the route of presenting a constitutional lawsuit. The community controls and protects their territory, however they don’t see who is administering the PNCAZ. We understand that this park has benefitted from carbon credits. Despite this, the community has not benefitted, even when they are conserving their lands.”

In recent years, international buyers of the Cordillera Azul carbon credits have included oil companies (Shell, Enagas, Repsol and CEPSA), airlines (British Airways, Etihad and Delta), international transport (Kuehne + Nagel) and ice cream (Ben & Jerry's). Another buyer of these credits, since 2018, is Peru’s own Ministry of the Environment, as a contribution to Peru’s Nationally Determined Contribution to reduce greenhouse gases as part of international climate change negotiations. However, these carbon credits have been bought behind the backs of the affected Indigenous Peoples, and without consideration for their own forms of organisation.

“This lawsuit is important for us because there has been a failure to ensure the effective participation of Kichwa communities in the management of the Cordillera Azul National Park,” said Nelsith Sangama, a Kichwa woman leader and member of CEPKA.

“Decisions are taken behind closed doors, without free participation. Moreover, decisions are limited, failing to take into account Indigenous Peoples. The collective is not informed of anything and the rules are made in offices in a top-down way,” she said.

The Kichwa have decided to make public their lawsuit now, which was filed in 2020, due in part to their increasing concerns that carbon credits are being used to justify the continuation of activities with destructive social and ecological impacts, as well as continued lack of progress by the Peruvian State to protect and title their territories.

“In a climate emergency, so-called “nature-based solutions” based on the continuing dispossession of Indigenous Peoples and opaque carbon credits for some of the most polluting companies on the planet are a dangerous distraction,” said Tom Younger, Forest Peoples Programme’s Peru Programme Coordinator.

“If the Peruvian Government wants to secure Indigenous Peoples’ wellbeing, lands and livelihoods while protecting the Amazon in the face of the climate and ecological crisis, it should prioritise immediate actions to protect and title Indigenous territories and support those communities which defend them,” he said.

I) Carry out a free and informed consultation process for Supreme Decree 031-2001-AG which created the PNCAZ and the PNCAZ’s Master Plan;

II) Respects the right of those Indigenous communities whose lands are superimposed by the PNCAZ to benefit from conservation activities within their territories;

III) Instructs park-guards to permit access to members of Puerto Franco and other affected communities to their natural resources and their traditional subsistence activities pending the prior consultation process;

IV) Upholds the right of those Indigenous Peoples superimposed by the PNCAZ to participate in the management of the area in line with their right to self-determination.