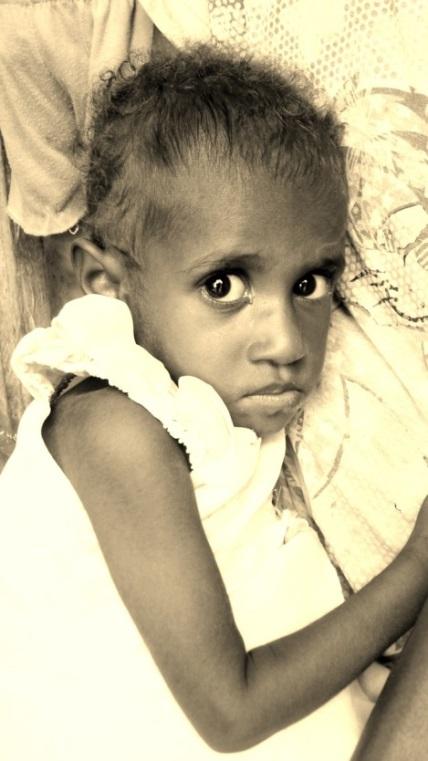 The village of Zanegi in Merauke Regency of Papua Province, Indonesia, lies desolate and silent, in contrast to the rumble and drone of bulldozers and chain-saws in the distance. At the end of a row of humble wooden houses, thirty-one year old Yosefa, an indigenous Malind mother of three, crouches beside her hearth, raking the embers of a dying fire, whilst rocking to sleep her three-year old infant. The child is emaciated and hollow-eyed. Gaunt and lethargic from severe malnutrition herself, Yosefa wipes beads of sweat off her feverish forehead, and tells the story of a dying village:

Before the company, there was little illness. We would eat sago and walk the forest all day without being weary. Now, the sago dies and the earth is dry. The rivers are dark and oily, and the fish drunk on pollution. Our children are dying because our sacred mother land has been ripped away from us. Soon, the Malind people themselves will cease to exist. When the forest disappears, the Malind will disappear.

The Indonesian government has issued an industrial timber plantation licence for use on the Zanegi community’s customary lands to timber company PT Selaras Inti Semesta, a subsidiary of the Medco Group, whose concession extends over 169,400 ha, and which is one of over 80 companies operating as part of the government-sponsored Merauke Integrated Food and Energy Estate (MIFEE) agro-industrial mega-project. The MIFEE project was formally launched in 2010 by Minister of Agriculture Suswono and today covers an estimated 2.5 million hectares, more than half of the 4.5 million hectare area of Merauke. However, instead of the promised social development and economic aid, the people of Zanegi today live in abject and unprecedented poverty, with scarcely sufficient land to hunt and gather to meet their daily needs.

Disease and undernourishment are rampant; in 2013 alone, five infants have died from malnutrition. Generalised emaciation, water-related skin infections, infant and child lethargy and bloated stomachs are all flagrant evidence of the severe food insecurity faced by the community as a result of the loss of their customary lands and livelihoods to incoming investors.

On 25 July 2013, in anticipation of the 83rd Session of the United Nations Committee on the Elimination of Racial Discrimination (which started 12 August and ended 30 August 2013), 26 Indonesian and international organisations and the Forest Peoples Programme, submitted a report to the Committee requesting its consideration of the situation of the Malind and other indigenous peoples of Merauke, under the Committee’s urgent action and early warning procedures (EW/UA procedures).  A first submission, two years ago (31 July 2011) led the Committee to adopt a communication under its EW/UA procedures with the Government of Indonesia on 2 September 2011.

But despite the concerns and recommendations made by the Committee and a second submission on the situation of the Malind and other indigenous peoples made on 6 February 2012,  Indonesia failed to take any corrective action and the situation continues to deteriorate. There has been no discernible change in policy or practice with respect to the MIFEE project, and there has been continued disregard for the internationally guaranteed rights of the indigenous Malind people, notably under the United Nations Declaration on the Rights of Indigenous Peoples. The Papua Special Autonomy Law, intended to correct serious inequality and human rights violations as well as to refocus the self-determination aspirations expressed by the majority of indigenous Papuans, remains largely ineffective, mostly as a result of the lack of requisite implementing laws and action.

The signatories to the July 2013 submission to the UN Committee for the Elimination of Racial Discrimination, call on the Committee to urge Indonesia to immediately suspend any part of the MIFEE project that may threaten the cultural survival of the affected peoples and to provide immediate support to indigenous communities deprived of their means of subsistence, which must be designed with their full participation and consent. The submission also urges Indonesia to, as soon as possible, enact and implement with the full and effective participation of indigenous peoples, the Draft Law on the Recognition and Protection of the Rights of Indigenous Peoples adopted by the Indonesian National Parliament on 16 December 2011. It further recommends that Indonesia requests, or accepts requests, for on-site visits from the United Nations Special Rapporteurs on the Rights of Indigenous Peoples, the Right to Food, and on Contemporary Forms of Slavery, to assist with compliance with its international obligations, including in relation to the rights of indigenous peoples in Papua.

Across Merauke Regency, indigenous Malind communities like that of Zanegi are being lured into ceding vast extents of their lands to palm oil, sugarcane, timber and other companies to develop large-scale plantations. Consent, where sought, is obtained through coercion, deceit, misinformation and the purposeful manipulation and fragmentation of the Malind’s customary community collective decision-making processes and representative institutions. Agustinus Karlo Lumban Raja, Head of the Environment and Policy Initiative Department of Indonesian NGO Sawit Watch, notes:

The proliferation and intensification of horizontal social conflicts over customary land boundaries testifies to the vulnerability of indigenous Malind people whose customary lands are being targeted and developed by the private sector without adequate and fully representative prior consultation with the various clans and tribes who lay claims to these lands.

Terms of compensation are unilaterally imposed rather than negotiated, at rates of less than 0.86 USD per hectare per year per clan. Without exception, interactions between the company and the communities are held in the constant presence of the military and armed forces, such that freedom of expression is restricted and objections to the proposed developments stifled. Even religion has not been spared in this unrestrained land grab, with company representatives passing themselves off as priests to encourage community members to cooperate and give up their lands.

But development is also sorely needed in the villages of Merauke Regency, as Yosefa explains:

It is not that we reject development. Rather, we do not want to be observers to our own development. In some ways, the companies can help us. In practice, however, they trample on our basic rights.

Land development based on large-scale forest conversion and the import of skilled labour will not benefit the indigenous Malid people. Rather, they will be become alienated from their lands, resources and customary livelihoods and become impoverished labourers. The very existence of this people is at risk. It is imperative that the government suspend further development of the MIFEE project and give due recognition and respect to the customary knowledge, values and rights of the Malind people.

The tragedy of Zanegi has spread through word of mouth to neighbouring villages. They are also being approached by companies seeking to develop their customary lands. As the elders congregate under bivouacs after a collective hunt in the forest to discuss the future of their community, the story of the dying village often surfaces as a vivid and ominous reminder of the consequences of surrendering land. In Baad village, sugarcane company PT Anugrah Rejeki Nusantara, a subsidiary of Singapore-based multi-conglomerate Wilmar Group, is seeking to develop a plantation. Sosom clan chief in Baad village, Kasimirus Kaize, cautions:

We want to accept the company’s offer, but then we see the experience of other villages, such as Zanegi, who have given away their land to companies and have got even poorer than ever before. So we are careful now. Of course, we feel sorry for Zanegi, but in some ways, we are grateful for Zanegi because from their experience we have learned a lot. It makes us think carefully about our own decisions. Our ancestors did not give us our land for us to sell it to companies. To sell it is to kill ourselves. If we start selling the land, we might as well not have children or grand-children anymore, as they will have nowhere to live.

With the first signs of the build-up towards the Presidential Elections in 2014, there is hope that the political momentum will swing towards bringing long-awaited justice and remedy to the indigenous peoples and local communities of Merauke. On the other hand, the momentum could also eclipse those concerns in the eyes of an already unresponsive government. In this volatile context, the submission of civil society organisations to the CERD Committee seeks to raise the voices of the thousands of indigenous Malind whose livelihoods and very existences are threatened by the MIFEE project. But for many mothers like Yosefa, it is already too late. The infant she brought to the world has died quietly in her arms, and the Malind are one life fewer than they were at the break of dawn.

25 July 2013: Request for Further Consideration of the Situation of the Indigenous Peoples of Merauke, Papua Province, Indonesia, under the UN CERD's Urgent Action and Early Warning Procedures

31 July 2011: Request for Consideration of the Situation of Indigenous Peoples in Merauke, Papua Province, Indonesia, under the United Nations Committee on the Elimination of Racial Discrimination’s Urgent Action and Early Warning Procedures

2 September 2011: UN CERD formal communication to the Permanent Mission of Indonesia regarding allegations of threatening and imminent irreparable harm for indigenous peoples in Merauke District related to the MIFEE project