Logging the Heart out of Borneo: the distressing case of Long Isun 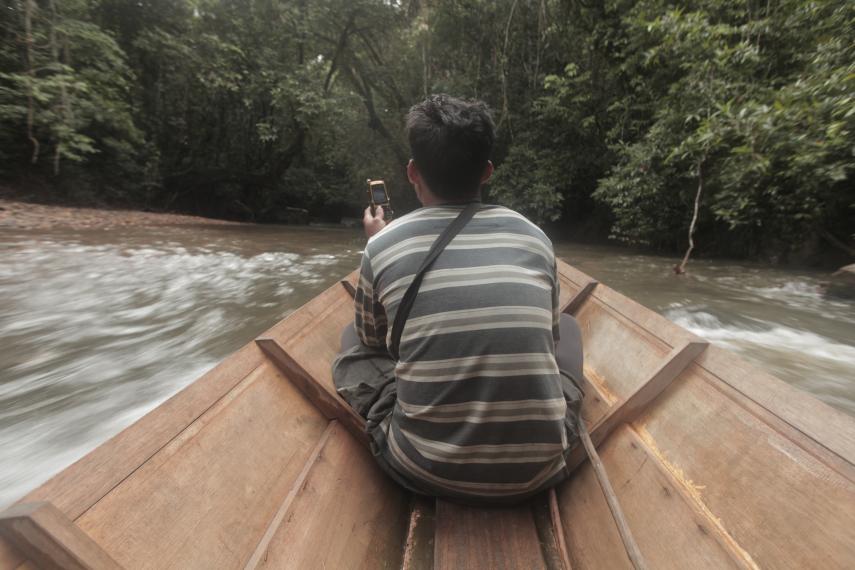 GPS is used to map the community's territory

In the late 19th Century, a large group of Dayak Bahau settled on the Meraseh river, a tributary of the Upper Mahakam in East Kalimantan, Indonesia. For a century, they remained largely undisturbed at Long Isun until the 1980s when the government resettled them to the banks of the Mahakam river. The subsequent years have brought much disruption to these communities living in the centre of the island of Borneo.

In Long Isun, the Dayaks’ unique relationship with the land is being eroded by big business. For community members, land holds a deep spiritual and cultural meaning. Their territory is divided into 13 distinct areas including an area to collect rattan (the raw material for their handicrafts), an area to bury the dead and an area named Tannaq Peraaq (translation: conservation area).

Conservation is built into Dayak culture. The survival of the forest is paramount for the survival of future generations of Dayaks. “Though we humans can give birth, the land cannot, if we chop down the forest what hope is there for our grandchildren” cries Inui Yeq, spiritual leader of Long Isun, “Dayaks can’t be separated from the forest, our lives are spent in the forest. Without her we lose our identity”.

Not only do the Dayak depend on their land for their own livelihood but it is the source of their medicine, sustenance and cultural practices. This begs the question: who is more likely to protect and preserve the forest? The community who have a self-interest in guarding her for their own survival and the survival of future generations, or corruptible government officials and industry who see the forest only in financial terms and lack this deep relationship with the land?

In 2007, the international conservation organisation WWF publicly announced an international programme to conserve the ‘Heart of Borneo’. The aim of the initiative, which was formally endorsed by the governments of Brunei, Malaysia and Indonesia, was to “conserve the biodiversity of the Heart of Borneo for the benefit of the people who rely upon it”. Encouraging companies to carry out responsible logging was presented as a core part of the programme, with Forest Stewardship Council (FSC) certification providing the stamp of approval for the sustainable management of the forests.

In 2008, FSC certified PT Kemakmuran Berkah Timbers (PT KBT), which was handed a concession of 82,000 hectares overlapping the territories of six different Dayak groups, including Long Isun’s. It wasn’t long before tensions started to arise. The company first ran into objections from the Dayak Bahau community of Long Tuyoq where an ongoing dispute continues, relating to the extraction of timbers from their precious Tanaaq Peraaq.

Two years later, in 2014, PT KBT commenced its operation in earnest on 2,000 hectares of Long Isun’s customary land. The effects of this were immediate.

“KBT’s actions have meant that we can no longer find animals to hunt because they fear the noises KBT’s vehicles make, we cannot fish because the river has been polluted with chemicals and we cannot find ulin [a local ironwood] or garu [agarwood] because the company has taken them all,” notes Hufat Biseh, head of the Long Isun hunters.

Matters very quickly worsened. When village representatives attempted to engage in dialogue with the company they were met with police repression. One member, Teodorus Tekwan, was arrested and jailed without charge for 109 days.

When reflecting on his time inside, Tekwan stated “in the end it looked like the police and KBT were working together, they wanted to trade my sentence for our territory”.

Fortunately, the determination and resolve that runs through the whole community was not broken by these events, and the community, supported by relentless work from a coalition of 13 NGOs from East Kalimantan, carried out a concerted media campaign in support of Long Isun, and eventually persuaded the authorities to have Tekwan released.

Since PT KBT began harvesting timber in Long Isun territory, they have at no point sought the community’s consent for their operations despite the community stating repeatedly since 2012 that they do not wish to have any companies operating on their land. Regardless of these clear messages from the community, the ‘independent’ certification body (Rainforest Alliance) and its auditors (whose role it is to guard against human rights violations and environmental destruction) showed complete disregard for the community’s concerns and twice renewed PT KBT’s certificate in 2015 and 2016.

This sparked FPP to partner up with local Dayak Women’s organisation, Perkumpulan Nurani Perempuan, and lodge an official complaint and force FSC to investigate the matter.

Disappointingly what has followed in the six months since FSC opened the case has been a farce. Rainforest Alliance carried out a sub-standard investigation into our claims. Auditors arrived at the community accompanied by PT KBT staff, the sub-district military and a mobile police brigade. No community consultation was held and instead a handful of intimidated community members were interviewed.

There were some positives to be taken from the final report submitted by Rainforest Alliance in June whereby PT KBT’s FSC-certification was terminated. The findings did not, however, acknowledge the fact that the community’s customary rights had been violated. In a further blow, FSC declared this result as grounds to drop the case and provided no compensation for the Dayak's loss of 2,000 hectares of land to the company.

The experience of Long Isun has exposed major weaknesses in relying on certification schemes to protect indigenous peoples' rights.

How can it be expected that Certification Bodies can independently assess their own performance? With no remedy provided by FSC to the community to compensate them for the damage to their lands and to the ecosystems that they rely on for their lives, FPP and the communities themselves are left wondering where justice can be found.

Within the wider context of protecting Borneo’s forest the future is even bleaker. If this is the way in which environmental agencies, multi-stakeholder certification schemes and governments view conservation, it won’t be long until Indonesia will have logged the Heart out of Borneo, and in the process destroy the way of life of those who can protect their lands.